I ran into an article in the New York Times a couple of days ago that begins with the line, "The brain has an amazing capacity for recognizing faces."

This made me snort derisively, because as I've mentioned before, I have prosopagnosia -- face blindness.  I'm not completely face blind, as the eminent writer and neuroscientist Oliver Sacks was -- Sacks, after all, didn't even recognize his own face in a mirror.  I'm not quite that badly off, but even so, I don't have anywhere near instantaneous facial recognition.  I compensate by being good at remembering voices, and paying attention to things like gait and stance.  Beyond that, I tend to remember people as lists of features -- he's the guy with the scar through one eyebrow, she's the one with black hair and three piercings in her left ear.  But it's a front-of-the-brain, conscious cognitive thing, not quick and subconscious like it (apparently) is with most people.

And even that strategy can fail, if someone changes hair styles, gets new glasses, or begins to dress differently.  Then I have to rely on my other strategies, as I did a couple of days ago in our local pharmacy.  The check-out clerk smiled at me, and I said hi and greeted her by name.  She was a former student who had taken my neuroscience class a couple of years ago, and she grinned at me and said, "I thought you didn't recognize people's faces." 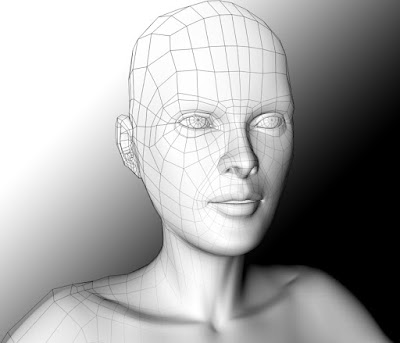 Despite my scornful snort at the first line of the article in the Times, I was pretty interested in its content, not least because it gives me an insight into my own peculiar inability.  The article describes the research of Le Chang and Doris Y. Tsao (published this week in Cell), of Caltech, who using fMRI monitoring of the brains of monkeys, have begun to elucidate how the brain processes faces.  Chang and Tsao write:


Primates recognize complex objects such as faces with remarkable speed and reliability.  Here, we reveal the brain’s code for facial identity.  Experiments in macaques demonstrate an extraordinarily simple transformation between faces and responses of cells in face patches.  By formatting faces as points in a high-dimensional linear space, we discovered that each face cell’s firing rate is proportional to the projection of an incoming face stimulus onto a single axis in this space, allowing a face cell ensemble to encode the location of any face in the space.  Using this code, we could precisely decode faces from neural population responses and predict neural firing rates to faces.  Furthermore, this code disavows the long-standing assumption that face cells encode specific facial identities, confirmed by engineering faces with drastically different appearance that elicited identical responses in single face cells.  Our work suggests that other objects could be encoded by analogous metric coordinate systems.

Put more simply, the brain seems to encode facial recognition in a fairly small number of cells -- possibly as few as 10,000 -- which fire in a distinctive pattern depending on the deviation of the face being observed, on various metrics, from an "average" or "baseline" face.  This creates what Chang and Tsao call a "face space" -- a mapping between facial features and a set of firing patterns in the facial recognition module in the brain.

Chang and Tsao got so good at discerning the "face space" in a monkey's brain that they could tell which face photograph a monkey was looking at simply by watching which neurons fired!

So what that means is that we don't have devoted neurons to particular faces; there is no "Jennifer Aniston cell," as the concept has often been called.  We simply respond to the dimensions and features of the face we're observing, and map that into "face space," and that allows us to uniquely identify a nearly infinite number of different faces.

Tsao suspects that there are other types of encoding in the brain that will turn out to work the same way.  "[There is in] neuroscience a sense of pessimism that the brain is similarly a black box," she said. "Our paper provides a counterexample.  We’re recording from neurons at the highest stage of the visual system and can see that there’s no black box.  My bet is that that will be true throughout the brain."

Which makes me wonder where this whole system is going wrong in my own brain.  I certainly see, and can recall, facial features; it is not (as I thought when I was younger) that I am simply inattentive or unobservant.  But somehow, even knowing features doesn't create any kind of recognizable image for me.  For people I know well, I could list off features -- round face, crooked nose, wavy brown hair, prominent chin -- but those don't come together in my brain into any sort of visual image.  The result is the odd situation that for people I know, I can often describe them, but I can't picture them at all.

So anyhow, if at some point I pass you on the street and don't say hi, or even make eye contact and have no reaction, I'm not being unfriendly, you haven't somehow pissed me off, and I'm not daydreaming.  I honestly don't know who you are.  It'd be nice if, like my former student, everyone went around wearing name tags, but failing that, I'll just have to keep muddling along in a sea of unfamiliar faces.
Posted by Gordon Bonnet at 2:30 AM