If you needed something else to feel discouraged about, a study released this week in the journal New Media & Society found that fake news and political clickbait sites had twice the effect on the media landscape in the United States as legitimate sources and fact-checking sites.

Authored by Chris J. Vargo, Lei Guo, and Michelle A. Amazeen, "The Agenda-Setting Power of Fake News: A Data Analysis of the Online Media Landscape From 2014 to 2016" looks at not only the influence that fake news has on politics and culture, but how difficult it is to fight it.  The authors write:


Journalists have little ability to proactively fight fake news. Even worse, partisan media can be susceptible to its influence.  Other news organizations fight fake news. The BBC, for instance, has announced a commitment to debunk fake news that is shared widely on social media Fact-checking organizations have become another bulwark against fake news with PolitiFact, FactCheck.org, ABC News, the Associated Press, and Snopes all fighting it on Facebook.  However, this reactive desire to thwart fake news has required traditional media to divert resources—in the form of time and attention—to fighting it.  What is worse, by being forced to respond to fake news journalists may be affording fake news websites with the ability to push topics, issues, and even attributes into the public agenda.

The worst part of all, of course, is the fact that many of these partisan media sources wield tremendous influence over voters' understanding of the issues:


The relationship between fake news and partisan media is worthy of particular attention. Instead of valuing balance, fairness, and objectivity, partisan media often frame stories in a way to advance certain political agendas driven by in-group or tribal identification.  Traditional partisan media include cable news (e.g. Fox News) and talk radio (e.g. the Rush Limbaugh Show).  The Internet has contributed to the proliferation of new forms of partisan media: partisan websites and blogs such as Drudge Report and Daily Kos.  With the emergence and popularity of social media services, partisan news coverage is more popular than ever before.  Moreover, these social media networks facilitate the spread of misinformation via automated, anonymous accounts which target users already engaged in conversation on a particular topic.

Crown that with our current administration's tendency to shriek "Fake news!" whenever there's a news story they don't like, and you have a complete political clusterfuck, and one that I see no way out of any time soon.

Lead author Chris J. Vargo isn't much more optimistic than I am.  "Fact checkers largely were independent in what they chose to cover, but their topical focus didn’t really translate very well to other media," Vargo said.  "The media landscape isn’t listening to fact checking as much as it is to fake news, which is particularly troublesome...  I think the big thing that I’m realizing across these studies is that anything can distract us." 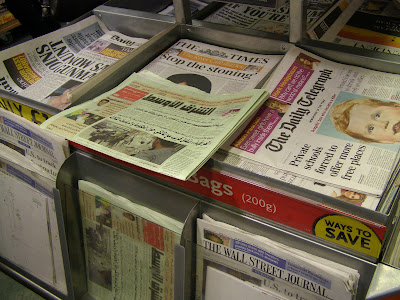 The problem is that exaggerated, sensationalized, or outright false headlines are much more likely to grab our attention than are headlines about the actual issues, which (by comparison) are often boring.  Add to this a heaping helping of confirmation bias -- our tendency to believe with little evidence things that conform to our preconceived notions -- and it's no wonder that the folks who detested Hillary Clinton's politics fell for the whole idiotic "Pizzagate conspiracy" last fall.

Vargo remains optimistic, however, and cites the fact that even in the face of partisan media and fake news sites, the responsible and balanced media have soldiered on even in the face of repeated attacks.  "Our study found that to a small degree, yes, fake news does influence what the press talks about." Vargo said.  "But largely, the press has the ability – and maintains the ability – to cover the issues that are most important to a society today."

Of course, covering the important issues and getting the voters to listen are two entirely different things.  Encouraging people to stop paying attention to such serial offenders as Fox News and Daily Kos, and to get their information from places like BBC, is proving to be pretty difficult.  After all, once you have a government leader convince you that 99% of what you hear on the most reliable media sources is fake, and that fact-checking sites are biased and unreliable, you are set up to believe damn near anything.

So unfortunately, I don't share Vargo's optimism.  I think the last vestiges of my positive attitude toward people's ability to think critically were shattered when Fox News persuaded the evangelical Christians to support a sociopathic serial adulterer who lies every time he opens his mouth, claiming that he was the perfect embodiment of the Ten Commandments.

After that, I don't hold out much hope for the collective brainpower of humanity.
Posted by Gordon Bonnet at 2:06 AM