A friend and loyal reader of Skeptophilia sent me a link yesterday with the note, "Maybe you need this for your dogs."  So I clicked on it, and was brought to a site called "Flower Essences for Animals."

If you're wondering what a "flower essence" is, then allow me to explain. A flower essence is made by floating flowers in water, and exposing them to the light of the sun, moon, or stars, so that the water is "potentized" -- the "energy vibrations" of the flowers are "transferred to the structure of the water." This then creates a "mother tincture" that can be used to treat physical or emotional problems. 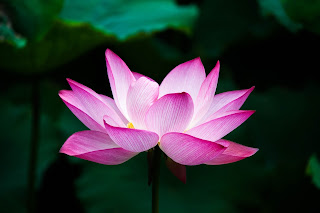 [image courtesy of photographer Hong Zhang and the Wikimedia Commons]

And boy, the people who run this website think that flower essences can do everything but balance your checkbook.  If you understandably would prefer not to risk valuable brain cells by clicking the link yourself, I present here a few highlights:


"Flower essences (remedies) are specially prepared extracts of the flowering parts of certain plants. They work through energy fields to heal stress and disease from the inside."

"Many other essences have been created around the world, not only from flowers, but also from gems, minerals, animals, butterflies, lakes, sacred earth sites, stars, celestial phenomena, and Ascended Masters. Many of them are very useful in helping our animal companions recover from trauma, injury, and stress. These non-flower essences are often referred to as 'energy' or 'vibrational' essences."

"Essences heal underlying negative emotional states by 'flooding' the patient with the opposite, positive quality. For example, the essence of Holly is love. Use Holly in any situation where there is a lack of love, such as anger, jealousy, or rage. Similarly, the essence of Rock Rose is courage; it is helpful in cases of deep fears, panic, and terror."

"Since essences act energetically, not physically, they are completely safe and non-toxic. They cannot be overused or misused, and they are compatible with all other treatments, including drugs, surgery, and holistic treatments like herbs and homeopathy. Even if you give the wrong remedy, it will not have any negative effects, but simply no effect."

This, of course, brings up a few questions, to wit:
And believe me, it's not that I wouldn't welcome such a thing, if it worked.  I own two dogs, who between them are a walking encyclopedia of canine psychiatric issues.   One of my dogs, Grendel, is a tough-looking, barrel-chested mutt whose appearance has "junkyard dog" written all over it, but whose personality has resulted in our giving him a variety of nicknames, including "CreamPuff," "Mr. Fluffums," and "WussieDog."  He's a cuddler, not a fighter.  Plus, he's terrified of nail clippers, squirt bottles, and other hand-held devices, and runs and hides if we are holding one.  Our other dog, Lena, is a coonhound, and has a brain the size of a Cocoa Puff.  She is constantly cheerful, and has this extremely alert expression, which we did not realize until we brought her home was her way of communicating the idea, "Derp?"  When our son was home visiting last time, he looked out of the window, and said, "Um... Dad?  Lena's staring at a tree."  And sure enough, she was.  Not even looking up into the branches, searching for squirrels; staring at the tree trunk from a distance of about six feet, as if she expected it suddenly to burst into flame or something.

She stared at the tree for almost forty-five minutes, then kind of gave a canine shrug as if to say, "Well, I guess it's not going to do anything interesting today," and meandered off to bark at her own reflection in our pond.

Even given our dogs' rampant mental issues, however, I'm not going to waste my time and money messing around with flower essences.  For one thing, they're not cheap -- in the sites I looked at, small bottles of essences start at $15.99.  For another thing, I'm not eager to support people who are hoodwinking the public with pseudoscientific horseshit for which there is not a shred of hard scientific evidence.

And for yet another thing, Grendel would probably be afraid of the dropper bottle.
Posted by Gordon Bonnet at 3:03 AM