In the "Loyal Reader One-Upmanship" department, over the last couple of days we have had here at Skeptophilia an escalating series of topics suggested by fans.  First, we had the one about "sound-induced orgasms."  That prompted another reader to send me a link to an article about "astral sex," so I wrote about that yesterday.  And just this morning I got yet a third email, this one with the rather hysterical message, "I THOUGHT YOU SAID ASTRAL SEX NEVER RESULTED IN PREGNANCY???!!!!  WELL, EXPLAIN THIS, BUB!!!!" along with a link to an article about a couple in Plymouth, England whose apartment is being haunted by a "ghost baby."

I suppose his concern is logical enough.  I mean, what would astral sex produce if not "ghost babies?"  It does raise some purely biological questions such as how someone's spirit would give birth, not to mention things like ghost baby gestation period, how genetics works in the spirit world, and so forth. Not to mention the issue of custody if one of the spirit parents decides to disappear in a swirl of ectoplasm.

Be that as it may, the article tells us about a British couple who is remarkably blasé about the fact that they're being haunted by a ghostly infant, which is doubly strange because said spirit baby has been seen in the crib of their own real, flesh-and-blood baby. 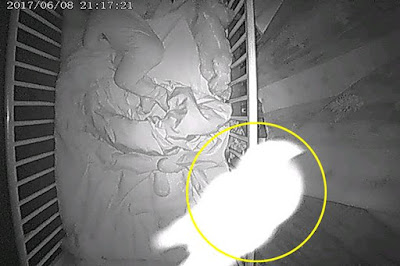 What Haigh and Evans saw on the baby monitor.  The yellow circle is a little superfluous, don't you think?

I don't know about you, but however open-minded and accepting I am, I would draw the line at having my kid sharing a bed with a ghost.  But the couple, Laura Haigh and Dean Evans, don't seem especially concerned how a ghostly visitor might affect their son, Sebastian.  They were certainly alarmed enough when it happened the first time.  Haigh says she and Evans saw something peculiar on the baby monitor, a shape next to their sleeping son who appeared to be waving things and moving around:


When I noticed this face appear in the corner of his cot I got my sister to look on Skype and there was nothing there at all.  Sometimes [Sebastian] brings a teddy to bed with him so at first I thought it could be that, but this just looks weird.

Dean said straight away, 'it will be just a teddy' and went straight upstairs.  However he was a little bit gobsmacked that there was nothing there but it was still appearing on the monitor.  He was a bit spooked as he doesn't believe in that kind of thing and just can't explain it.

He usually says 'don't be silly' about anything like this.  This has opened his mind a little but he doesn't like to talk about it much.  He just kept asking on the night 'has it gone yet?' as he was a bit freaked out.  I have checked out the camera and I'm sure there's nothing wrong with it.

Friends think it's really creepy.  Whatever it was stayed in the cot until 1.30am and disappeared when I went to feed him.  But during the night it moved positions.

Yes, you read that right: this couple saw a ghostly figure leaping about in their son's crib, and they left the baby in the crib.  For hours.  I don't know about you, but if I saw something like this, "a bit gobsmacked" would be putting it mildly.  Honestly, I'd have grabbed my kid and my significant other, and gotten right the fuck out of the house.

And that's coming from a guy who doesn't believe any of this stuff.

But belief is one thing, and risking my kid's safety is another.  My general response in situations like this is "panic first, think afterwards."  I figure if I freak out and run, there'll be plenty of time later to sit down and ponder it rationally and have a good laugh at my own gullibility.  On the other hand, I've watched enough horror movies to know that the guy who says calmly, "Come on, it's safe, there's nothing here" is always the first one to get eaten by the monster.

So I find their reaction completely incomprehensible.  Unless, of course, they're making the whole thing up for attention, which upon reflection seems the likeliest explanation.

Anyhow, the upshot of it all is that you can't even have some hot astral sex without worrying about pregnancy.  It's a shame, really, since real sex is fraught with risks of various kinds, and here I thought that at least the astral variety would be safe and fun.  I guess the conclusion is that if you decide to send your soul out to look for a hookup, you should still use protection.

Although it does open up the question of how you get a condom on a spirit.  But if yet another loyal reader has found an article about birth control in the spirit world, I don't want to know about it.  Seriously.  This has gone far enough.
Posted by Gordon Bonnet at 3:00 AM