Going to the dogs

A week ago, I wrote about a fake academic paper (on the topic of how the "concept of the penis" is responsible for climate change, among other things) that got into an allegedly peer-reviewed journal.  Following up on that general train of thought, today we have: a dog who is on the review boards of not one, nor two, but seven medical journals.

In fact, this dog, a Staffordshire terrier whose name is Olivia, is now listed (under the name "Olivia Doll") as an associate editor of the Global Journal of Addiction & Rehabilitation Medicine.  Olivia's CV is pretty intriguing; she lists under "research interests" the "avian propinquity to canines in metropolitan suburbs" and "the benefits of abdominal massage for medium-sized canines." 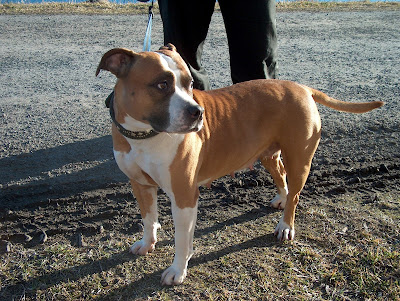 Which, you would think, would have been a dead giveaway.  If the people running the journals in question cared, which they probably don't.  Olivia's owner, Mike Daube, is a professor of health policy at Curtin University (Australia), and he signed Olivia for her first position as reviewer as a joke, never expecting anyone to take it seriously.

They did.  And Olivia started getting mail from other journals, requesting her participation in reviewing papers.  Next thing Mike knew, Olivia Doll was listed as a reviewer for seven different medical journals.  (One of them lists Olivia as a member of the editorial board, and with her biographical information Daube submitted a photograph of Kylie Minogue.  Even so, apparently people still didn't realize that it was a joke, and Minogue's photo is next to Olivia's CV on the webpage listing board members.)

"What makes it even more bizarre is that one of these journals has actually asked Ollie to review an article," Daube said in an interview with the Medical Journal of Australia’s InSight Magazine.  "The article was about nerve sheath tumors and how to treat them.  Some poor soul has actually written an article on this theme in good faith, and the journal has sent it to a dog to review...  Every academic gets several of these emails a day, from sham journals. They’re trying to take advantage of gullible younger academics, gullible researchers."

So all of this delivers another blow to public confidence in the peer review process.  Which is sad; my sense is that most of the time, peer review works just fine, and is the best thing around for winnowing out spurious results.  For the best academic journals -- Nature and Science come to mind -- the likelihood of a hoax paper getting past review, or someone unqualified (or even a different species) sneaking his/her way onto an editorial board is slim to none.

I get why Daube did what he did.  He was trying to point a finger (or paw, as the case may be) at predatory journals that will publish damn near anything if you pay them, and for which the review board is simply a list of names of random people.  But right now -- with a government administration here in the United States that is making a practice of ignoring and/or casting doubt on legitimate scientific research -- the last thing we need is something to make academics look like a bunch of gullible nimrods.

Which, of course, isn't Daube's fault; it's the fault of journals like the Global Journal of Addiction & Rehabilitation Medicine.  Daube is simply acting as a whistleblower, assisted by his faithful hound.  Even so, I still couldn't help but wince when I read this.  I can just hear the next salvo from people like Senator James "Snowball" Inhofe: "Why the hell should we listen to scientists?  Their research gets reviewed by dogs."

So it'll be interesting to see where this goes.  As of the writing of this post, Olivia is still listed as an editor and reviewer for seven journals, further reinforcing my sense that the journals in question don't give a damn who is on their review staff.  As far as Olivia goes, I hope that she's getting well rewarded for her service to the academic world.  Maybe Daube can list her as a graduate student, and have her doggie biscuits paid for by his research grants.
Posted by Gordon Bonnet at 2:00 AM