To further investigate our general topic of people giving woo-woo explanations to damn near everything, today we investigate: The Dark.

Things are generally called "dark" for one of two reasons.  First, there are objects whose chemical makeup results in their absorbing most of the light that falls on them.  Second, there are things that don't interact with light much at all, so they neither absorb nor reflect light -- light passes right through them.  An example of the first would be a charcoal briquet.  An example of the second would be interstellar space, which is sort of dark-by-default.

This whole thing comes up because of the discovery of an extrasolar planet with the mellifluous name TrES-2b.  TrES-2b orbits the even more charmingly named GSC 03549-02811, a star about 718 light years away.   More interestingly, it has the distinction of being the darkest extrasolar planet yet discovered.  David Kipping, of the Harvard-Smithsonian Center for Astrophysics, stated, "TrES-2b is considerably less reflective than black acrylic paint, so it is truly an alien world." 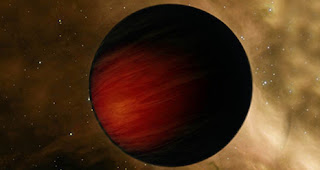 That was all it took.  Whereas my reaction was, "Huh!  A Jupiter-sized charcoal briquet!  That's kinda cool," the woo-woos just couldn't resist wooing all over this story.  We now have the following speculations, all from websites owned by people who probably shouldn't be allowed outside unsupervised:

The first two explanations left me with a giant bruise on my forehead from doing a faceplant while reading.  At the risk of insulting my readers' intelligence, let me just say quickly that (1) antimatter's "opposite properties" have nothing to do with regular matter being light and antimatter being dark, because if it did, the next time a kindergartner pulled a black crayon out of the box, he would explode in a burst of gamma rays; and (2) "dark matter" is called "dark" because of the second reason, that it doesn't interact with much of anything, including light, so the idea of a planet made of it is a little ridiculous, and in any case physicists haven't even proved that it exists, so if some astrophysicist found a whole freakin' planet made of it it would KIND OF MAKE HEADLINES ALL OVER THE FUCKING WORLD, YOU KNOW?

Sorry for getting carried away, there.  But I will reiterate something I have said more than once, in this blog; if you're going to start blathering on about science, for cryin' in the sink at least get the science right.  Even the least scientific woo-woo out there can read the Wikipedia page for "Dark Matter," for example, wherein we find in the first paragraph the sentence, "The name refers to the fact that it does not emit or interact with electromagnetic radiation, such as light, and is thus invisible to the entire electromagnetic spectrum."  (Italics mine, and put in so that any of the aforementioned woo-woos who are reading this post will focus on the important part.)

And I won't even address the "secret alien base" and "hell" theories regarding TrES-2b, except to say that it should come as a relief that the evil aliens or Satan (depending on which version you went for) are safely 718 light years away.  To put this in perspective, this means that if they were heading here in the fastest spacecraft humans have ever created, Voyager 1, which travels at about 16 kilometers per second,  it would still take them eleven million years to get here.

In any case, I guess it's all a matter of how you view what's around you.  I find the universe, and therefore science, endlessly fascinating, because what scientists have uncovered is weird, wonderful, and counterintuitive.  I don't need to start attaching all sorts of anti-scientific bunk to their discoveries -- nature is cool enough as it is.

Okay, thus endeth today's rant.  I will simply end with an admonishment to be careful next time you barbeque.  I hear those charcoal briquets can be made of antimatter, which could make your next cook-out a dicey affair.  You might want to wear gloves while you handle them.  Better safe than sorry!
Posted by Gordon Bonnet at 4:51 AM