In my youth, I was quite an accomplished liar.

I say "accomplished" more to mean "I did it a lot" rather than "I did it well."  I honestly don't know how well I lied -- it might be that people in general didn't believe what I said and were simply too polite to call me out on it.  On the other hand, I did get away with a lot of stuff.  So apparently I was at least marginally successful.

What I lied about tended to be exaggerations about my past -- I rarely if ever lied out of malice.  But I felt my own circumstances to be boring and bland, a sense compounded by the fact that I've always suffered from serious social anxiety, so I think I felt as if building up a fictional persona who was interesting and adventurous might assuage my fear of being judged by the people I met.  Eventually, though, I realized that all I was doing was sabotaging the relationships I had, because once people found out I wasn't who I said I was, they'd be understandably pissed that I hadn't been straight with them.  So I dedicated myself to honesty, a commitment I've tried my hardest to keep ever since then.

On the other hand, I became a fiction writer, which means now I make up elaborate lies, write them down, and people pay me to read them.  So maybe I haven't progressed as far as I'd thought.

Kang Lee and Victoria Talwar of the University of Toronto have been studying lying for some time, and they've found that the propensity of children to lie increases as they age.  Presumably, once they develop a sense of shame and a better impulse control, they find themselves sheepish when they transgress, and lie to cover up their feelings or escape the consequences.  In a study in the International Journal of Behavioral Development, Lee and Talwar gave children of varying ages a task while a music-playing toy played behind them, and told them not to peek at the toy:


When the experimenter asked them whether they had peeked, about half of the 3-year-olds confessed to their transgression, whereas most older children lied.  Naive adult evaluators (undergraduate students and parents) who watched video clips of the children’s responses could not discriminate lie-tellers from nonliars on the basis of their nonverbal expressive behaviours.  However, the children were poor at semantic leakage control and adults could correctly identify most of the lie-tellers based on their verbal statements made in the same context as the lie.  The combined results regarding children’s verbal and nonverbal leakage control suggest that children under 8 years of age are not fully skilled lie-tellers.

Lee considers this behavior a completely normal part of social development, and in fact, says he worries about the 10% of older children in his study who could not be induced to lie -- because telling the truth 100% of the time, without regard for others' feelings or the consequences thereof, might not be the best thing, either.

But the tendency to lie doesn't vanish with adulthood.  A study by Robert Feldman, of the University of Massachusetts-Amherst, found that 60% of adults lied at least once during a ten-minute conversation.

"People tell a considerable number of lies in everyday conversation," Feldman said about his study.  "It was a very surprising result.  We didn't expect lying to be such a common part of daily life...  When they were watching themselves on videotape, people found themselves lying much more than they thought they had... It's so easy to lie.  We teach our children that honesty is the best policy, but we also tell them it's polite to pretend they like a birthday gift they've been given.  Kids get a very mixed message regarding the practical aspects of lying, and it has an impact on how they behave as adults."

Of course, all lies aren't equally blameworthy.  Telling Aunt Bertha that the knitted sweater she made for your Christmas gift is lovely probably is better than saying, "Wow, that is one ugly-ass sweater, and I'm bringing it down to the Salvation Army as soon as I get a chance." 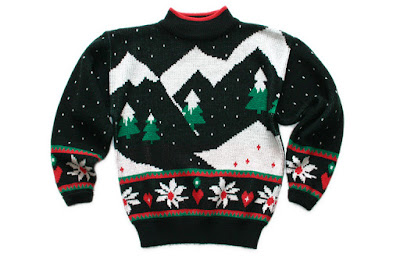 [image courtesy of Aunt Bertha and the Wikimedia Commons]

As for the kind of thing I did as a kid -- saying that I'd spent my summer vacation riding musk oxen in the Aleutian Islands -- it's kind of ridiculous and pointless, but other than distancing one from one's friends (as I described before) probably isn't really very high on the culpability scale, either.

But lying to hurt, lying for personal gain, lying to gain or retain power (I'm lookin' at you, Donald Trump) -- those are serious issues.

Unfortunately, however, even the less serious lies can cause problems, because there is the tendency for small lies to lead to bigger ones.  A study by Tali Sharot of University College London found out that our amygdala -- the structure in the brain that appears to mediate fear, shame, and anxiety -- actually fires less the more we lie.  The first lies we tell elicit a strong response; but we become habituated quickly.

The more we lie, the easier it gets.

So the old adage of "honesty is the best policy" really does seem to apply in most circumstances.

Unless, of course, you're a fiction writer.  Then the rules don't apply at all.  Now you'll have to excuse me, as I've got a herd of musk oxen to attend to.
Posted by Gordon Bonnet at 2:05 AM