Live your dream! Unless it's the one where you're naked on the bus.

Last night I had the strangest dream, but it wasn't about a girl in a black bikini (sorry if you're too young to get that reference).  One of my coworkers was going to be interviewed on public television by Yoko Ono.  I won't mention who the interviewee was, but trust me, if there was a list of people who were likely to be interviewed by Yoko Ono, this person would be near the bottom.  So anyway, I was being driven to this event by our school psychologist, but we were going to be late because he had the sudden overwhelming need to find a grocery store so he could buy a bag of potato chips.

I won't go any further into it, because at that point it started to get a little weird.

It is an open question why people dream, but virtually everyone does.  During the REM (rapid eye movement) stage of sleep, there are parts of the mind that are as active as they are during wakefulness.  This observation led brain scientists to call this stage "paradoxical sleep" -- paradoxical because while the body is usually very relaxed, the brain is firing like crazy. 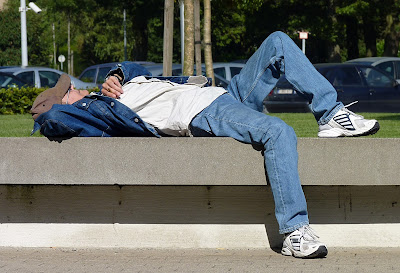 The content of dreams has been a subject of speculation for years, and all available evidence indicates that the little "Your Dreams Interpreted" books you can buy in the supermarket checkout lines are unadulterated horse waste.  Apparently there is some thought that much of our dream content is involved with processing long-term memories; but equally plausible theories suggest that dreaming is a way of resetting our dopamine and serotonin receptors, or a way of decommissioning old neural pathways (so-called "parasitic nodes").  Probably, it aids in all three.  Whatever it is, however, it's important -- all mammal species tested undergo REM sleep, some for as much as eight hours a night.

Anyone who's a dog owner probably knew that already, of course.  Both of my dogs dream, as evidenced by their behavior while they're asleep.  My coonhound, Lena, has squirrel-chasing dreams, which makes sense because while she's awake two of her three operational brain cells are devoted to constant monitoring of our backyard squirrel population.  She'll be lying there, completely sacked out, then suddenly she'll woof softly under her breath, and her paws will twitch as if she were running after her prey.  Every once in a while she apparently catches one, because she'll go, "Rrrrrrr," and shake her head as if tearing a squirrel apart.

Grendel, on the other hand, tends to have happy, sweet dreams.  He'll twitch and sigh... and then his tail starts wagging.  Which is a top contender for the cutest thing I've ever seen in my life.

As far as human dreams go, it's interesting that there is a fairly consistent set of content types in dreams, regardless of your culture or background.  Some of the more common ones are dreams of falling, being chased, fighting, seeing someone who has died, having sexual experiences, being in a public place while inappropriately dressed, and being unable to attend interviews by Yoko Ono because of searching for potato chips.

A few well-documented but less common dreamlike experiences include lucid dreams (being aware that you're dreaming while it's happening), hypnagogic experiences (dreams in light sleep rather than REM), and night terrors (terrifying dreams during deep sleep).  This last-mentioned is something that is found almost exclusively in children, and almost always ceases entirely by age twelve.  My younger son had night terrors, and the first time it happened was truly one of the scariest things I've ever experienced.  At 11:30 one night he started shrieking hysterically, over and over.  I jumped out of bed and ran down the hall like a fury, to find him sitting bolt upright in bed, trembling, eyes wide open, and drenched with sweat.  I ran to him and said, "What's wrong?"  He pointed to an empty corner of the room and said, "It's staring at me!"

I should mention at this point that I had just recently watched the movie The Sixth Sense.

When I finished peeing my pants, I was able to pull myself together enough to realize that he was having a night terror, and that there were in fact no spirits of dead people staring at him from the corner of his bedroom.  When I got him calmed down, he went back into a deep sleep -- and the next morning remembered nothing at all.

I, on the other hand, required several months of therapy to recover completely.

Whatever purpose dreams and other associated phenomena serve, there is no evidence whatsoever that they are "supernatural" in any sense.  Precognitive dreams, for instance, most likely occur because you dream every night, about a relatively restricted number of types of events, and just by the law of large numbers at some point you'll probably dream something that will end up resembling a future event.  There is no mystical significance to the content of our dreams -- it is formed of our own thoughts and memories, both pleasant and unpleasant; our fears and desires and wishes, our emotions and knowledge; so they are at their base a reflection of the bits and pieces of who we are.   It's no wonder that they are funny, scary, weird, complex, erotic, disturbing, exhilarating, and perplexing, because we are all of those things.

So, next time you're in the midst of a crazy dream, you can be comforted by the fact that you are having an experience that is shared by all of humanity, and most other mammals as well.  What you're dreaming is no more significant, but also no more peculiar, than what the rest of us are dreaming.  Just sit back and enjoy the show.  And give my regards to Yoko Ono.
Posted by Gordon Bonnet at 2:00 AM