I try not to spend too much time focusing on completely loony ideas here at Skeptophilia -- wackos are, after all, a dime a dozen, and grabbing the low-hanging fruit is kind of a cheap way to run a blog.  But sometimes I run into a claim that is so earnest, so serious, and at the same time so completely bizarre that it's kind of charming.

That was my reaction when a friend and loyal reader of Skeptophilia sent me a link to a site called "Bibliotecapleyades."  I have to admit that I have no idea what that means.  I know that biblioteca means "library" in Spanish, and pleyades sounds a little like "Pleiades," the star cluster that is thought among some of the astro-woo-woos to be the home of the Nordic aliens, who are tall, blond, blue-eyed, and muscular.

Sort of Liam Hemsworth from Outer Space, is how I think of them.

Whether that's the origin of the name or not, I have no idea.  He doesn't mention aliens, but given the rest of the content, I wouldn't be surprised if it came up at some point.

Anyhow, this particular page on "Bibliotecapleyades" is called "Earth Changes: Future Map of the World," and goes into how "international known [sic] and respected futurist Gordon-Michael Scallion" has a vision of how the world is going to end up.  And I do mean "vision."  His ideas aren't based on science (big shocker, there) but on his "ongoing visions concerning the Earth" that he experiences "sometimes as many as ten or more in a day, lasting from a few seconds to minutes."  But instead of seeking professional help for this condition, he started writing it all down, and put them all together into a unified, consolidated picture of what we were in for.

You really should look at the website itself, preferably after consuming a double scotch.  It's just that good.  But in case you don't want to risk valuable brain cells going through it, I present below a few highlights of what's going to happen.  Forewarned is forearmed, you know.

He then ends with a disclaimer, a little like the "this preparation is not intended to treat or cure any medical condition" thing you see on bottles of homeopathic "remedies."  He says:


[N]o event or prediction is final.  Predictions are given as probabilities.  Even at this time, consciousness can alter an event, modify changes in a particular area or at the very least help us to prepare for what is to come...  One final note, the areas of change presented in the Future Map of The World should not be taken as absolute. They may differ from a few miles to several hundred miles depending on many variables.  In the end, Mother Nature and our own collective consciousness will have the final say.

Be that as it may, he provides us with a map of the world showing all of the new land contours.  I'd post it here, but I don't know how Gordon-Michael Scallion feels about the copyright on images he's created, so you'll just have to go take a look for yourself if you want to figure out whether it's time to pack up and move.  Here's a map of what the world looks like now, so you'll have a basis for comparison. 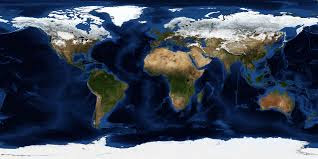 Anyhow, that's our excursion into the deep end of the pool for today.  Me, I'm not concerned.  He didn't provide a timeline for all of these catastrophes in any case, so right now I'm going to worry about more pressing issues, such as how the hell we here in the U.S. ended up with a spoiled toddler with orange spray-on tan as the president.  Frankly, compared to that, "Lumania" doesn't really bother me much.
Posted by Gordon Bonnet at 1:57 AM