Because clearly the news hasn't been surreal enough lately, today we have: an Australian geologist is suing the U. S. National Parks Service because they denied him the right to remove thirty pounds of rocks from the Grand Canyon in an attempt to prove that the biblical account of the Great Flood is true.

The geologist -- although how in the hell you'd get a Ph.D. in geology and somehow still be a young-Earth creationist is beyond my comprehension -- is named Andrew Snelling.  Snelling is a bit of a frequent flier here at Skeptophilia; regular readers may recall that he's the guy who (among other things) claimed that Beowulf shows that dinosaurs coexisted with humans and that an Allosaurus skeleton proves the six-day creation story.

So Snelling is a bit of a Johnny One-Note with respect to scientific inquiry; if it doesn't have something to do with the Book of Genesis, he's not interested.  And now he wants to show that the Grand Canyon was formed during the Great Flood, and is convinced that if he can only get his hands on some rocks, he'll be able to show that to the world.

"It’s one thing to debate the science, but to deny access to the data not based on the quality of a proposal or the nature of the inquiry, but on what you might do with it is an abuse of government power," said Snelling's lawyer, Gary McCaleb of the Alliance Defending Freedom.  Which is a little disingenuous; no one "debates the science," because people like Snelling aren't arguing from a scientific stance.  When you thump the cover of a bible and say, "I don't care if this was written by a bunch of superstitious Bronze-Age sheep herders, every word of it is true, regardless of any evidence to the contrary," you are not engaging in science, you are engaging in circular reasoning.  And once you're there, no scientific argument in the world is going to convince you otherwise.

Snelling, of course, doesn't give a rat's ass about any of that.  All he wants is any kind of evidence that seems to support his belief.  Candida Moss over at The Daily Beast said it well:

Because, says Moss, even the biblical account of the Flood is rife with internal contradictions, so the idea that it's literally true is literally... impossible:


Sure, the animals did go onto the Ark “by twosies twosies.”  God tells Noah to assemble a pair of each kind of animal, but then a couple of verses later he tells Noah to bring seven pairs of the “clean” kinds of animal and one pair of the “unclean” kinds of animals.  That doesn’t rhyme at all, but it’s important because at the conclusion of the story, just before the rainbow, Noah goes and sacrifices a number of the clean animals to God.  And, if Noah didn’t have seven pairs of animals, he would have saved all those species only to engage in an ad hoc mass extinction project.

The Flood does last for “forty days and nights.”  But it also lasts for 150 days and nights.  And while the Flood is caused by rain, it is also caused by the opening of primordial floodgates positioned above and beneath the earth.  Not only is this confusing, it does mean that scientific efforts to prove the historicity of the Flood should also have to explain where all of the water above and below the earth is.  And, for this purpose, an underground reservoir probably isn’t going to cut it with one’s fellow scientists.

All of these inconsistencies make for pretty difficult reading, which is why Christian tradition has plumped for a streamlined version that cherrypicks certain details.

Then, there's the problem that there is exactly zero evidence of a giant flood and a mass extinction.  You'd think there'd be some evidence of this -- a sedimentary rock layer at the same depth, all over the world, with millions of fossils of a wide variety of organisms.  Including, presumably, humans, since one of the cheery aspects of this supposedly edifying story is that the all-loving god drowned every human on Earth, including infants, for some unspecified "wickedness," leaving only the family of a 600-year-old man from whom all of us are presumably descended over and over and over again, thus adding rampant incest into the mix.

Interesting that this is one of the most commonly-told tales in children's Sunday school classes, isn't it? 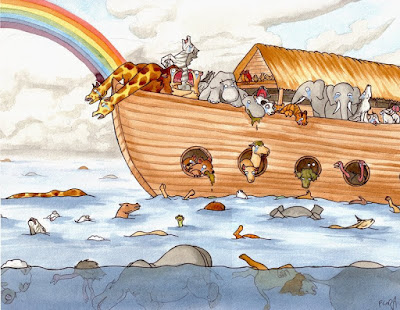 Anyhow.  My inclination would be to give Snelling his rocks and tell him to go away and have fun playing with them.  He's not going to be able to prove anything with them that any reputable scientist would accept, nor will he find anything out from them that could change his own mind (further indicating that what Snelling is engaging in is not science).  I know it's against National Park Service rules to let anyone take away anything from the park, but consider the upside: it'd keep Snelling and his cronies quiet for a while.  And I think that's well worth bending the rules for.
Posted by Gordon Bonnet at 2:01 AM