I guess Ken Ham is finally seeing the handwriting on the wall with respect to "Ark Encounter," his $92 million temple to young-Earth creationism in Williamstown, Kentucky, given that the number of visits it's received during its first year is only about 60% of what he and his financial partners had predicted. 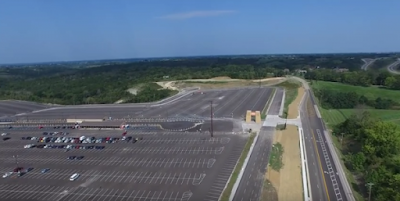 The Ark Encounter parking lot on a typical day

But if you thought that this realization was going to lead to some kind of epiphany on the part of Ham et al., vis-à-vis the fact that spending huge amounts of money to convince the general public that a rather perverse fairy story is science was not a great investment strategy, you are fated to be disappointed.  Because Ham doesn't blame himself for Ark Encounter's dismal performance.

He blames us atheists.  Of course.  Ham said:

Sadly, they are influencing business investors and others in such a negative way that they may prevent Grant County, Kentucky, from achieving the economic recovery that its officials and residents have been seeking.  Why so many lies and misinformation?  Simply because we are in a spiritual battle, and the intolerant secularists are so upset with such world-class attraction like the Ark (and Creation Museum) that publicly proclaim a Christian message.  They will resort to whatever tactics they deem necessary to try to malign the attractions.

No, Ken, honestly we see this as more of a "battle against anti-scientific bullshit," and I find the lack of interest the public is showing a welcome ray of sunlight in a year that has otherwise been pretty dismal.  And I'd love to claim responsibility for Ark Encounter's falling on its face, but I honestly think it's more that people deep down realize that the idea of a 600-year-old man and his family getting two of every kind of organism on Earth, including gorillas from Uganda and mountain lions from the Rocky Mountains, and keeping them all fed and happy on a boat whose dimensions would have (by one estimate I saw) given each creature 6.5 square millimeters of space to roam around in, followed by it raining enough to cover the whole Earth and then the water just kind of disappearing, is really fucking stupid.

But people like Ken Ham won't get within shouting distance of that as an answer, so they have to find something else to blame.  And if it's not the atheists, maybe it's... fake news:


Nowadays, it seems very few reporters in the secular media actually want to report facts regarding what they cover as news.  I’ve found that not only do these kinds of reporters generally do very poor or lazy research, they will actually make things up for their agenda purposes.

Yes, those evil reporters with their agenda purposes!  I'm quite sure that a reporter without an agenda purpose would have reported the above photograph as showing a completely full parking lot, much the way that if you looked at the photos of the less-than-impressive crowds at Donald Trump's inauguration just right, and tilted your head a little, he had the best-attended inauguration ceremony ever.

Keep in mind that all of this less-than-impressive performance was with a tremendous influx of public tax money.  Amazingly, legislators decided again and again to give their support to this project, despite the clear intent of the place to proselytize.  According to an analysis by the organization Church & State:

[Ark Encounter received] $18 million in state tax incentives to offset the cost of the park’s construction; a 75 percent property tax break over 30 years from the City of Williamstown (a town of about 3,000 near where the park will be located); an $11-million road upgrade in a rural area that would almost exclusively facilitate traffic going to and from the park; a $200,000 gift from the Grant County Industrial Development Authority to make sure the project stays in that county; 100 acres of reduced-price land and, finally $62 million municipal bond issue from Williamstown that Ham claims has kept the project from sinking.

If I lived in Kentucky, I would be raising hell over this.

Of course, there's a wryly funny side to the whole thing, and that's that Ham and his pals believe that the project was built because it was part of god's divine purpose and holy plan, and yet a few atheist bloggers, secular organizations, and reporters were apparently sufficient to thwart the Omnipotent Deity's intent.  Kind of calls into question god's ability to make stuff happen, doesn't it?  He's coming off more like one of the inept bad guys in an episode of Scooby Doo, whose plans to get rich off a haunted carnival came crashing down when Shaggy pulled off his mask.  I bet Yahweh is up there right now, scowling and muttering, "Ken and I would have gotten away with it, too, if it hadn't been for you crazy kids and your mangy mutt!"

Anyhow, my general feeling is that it couldn't have happened to a more deserving individual, and I wish him many more years of this kind of turnout.  Now we just need to make sure that this same load of nonsense doesn't end up in public school science curricula, in the guise of "religious freedom."

We may be winning this battle, but the war's far from over.
Posted by Gordon Bonnet at 4:06 AM