Taking the devil for a spin

Sometimes I think the fringe-y parts of the Religious Right stay up at night, and while the rest of us are doing something constructive like sleeping or fooling around with our Significant Others or snacking on the leftover pizza or watching reruns of Sherlock, they're surfing the web looking for things to be outraged about.

The thing is, I can't imagine how this can be much fun.  I don't enjoy being outraged, myself, and in fact sometimes deliberately avoid reading the news because I'd rather not spend the next six hours trying to fend off apoplexy.  But from the behavior of many of these folks, it seems like they positively relish the opportunity to rant and rave about the latest thing the evil secularists are doing to hasten the End Times and play right into the hands of Satan.

The latest thing to get the wacko SuperChristians' knickers in a twist is, of all things, the "Fidget Spinner."  Myself, I thought these things were innocent little devices intended to help people with attention issues concentrate by giving their hands something to do, much the way my younger son's more enlightened teachers used to let him work on making chain mail while he was listening to the lesson.  (I kid you not; in his first two years in high school, he made an entire chain mail shirt, weighing over fifty pounds, made from over 5,000 steel rings.)

So my general feeling about Fidget Spinners is that they're a clever tool to help people who problems focusing.  But no.

The Fidget Spinner is an evil device imported directly from the Pits of Hell. 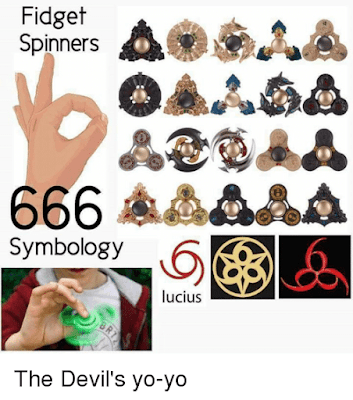 Apparently what got these nutjobs in an uproar is that when you hold the Spinner, your thumb and forefinger make a circle and your other three fingers stick out, which is clearly a Satanic symbol, except when it means "okay."  The sign, we're told, represents 666, the Number of the Beast from the Book of Revelation:


If you grab the newest gadget released into the slave camp, what's called "a fidget spinner", you"ll notice that you're instantly making the famous 666 masonic gang sign. Now 666 isn't really the sign of the devil but is simply an equation of 6+6+6=18. Inside an ancient symbol based code (called gematria), all numbers have to be reduced to 1 digit by simply adding the digits together, so 18 is really 1+8=9...

So when you see a "9", which is what the 666 hand symbol really is, you're seeing an ancient gang sign that shouts........."what you think is different here isn't different at all. It just looks different to give you an illusion of choice, but the outcome is always the same no matter what....and that outcome is always what we want."

No, what I'm shouting is, "This is about the only shape your hand can make when you pick something up between your thumb and forefinger, you fucking loon."

But that kind of argument never stops people like this, who call Fidget Spinners "the Devil's Yo-Yo."  Which, you have to admit, would make a killer name for a band.

I'm happy to say that there are Christians who are pointing this out for the nonsense it is.  Over at the site Hello Christian, they address the question "Are Fidget Spinners Satanic?" directly, and come to the answer, "No."  They do warn, however, that Spinners are dangerous, citing an incident wherein a boy threw his Spinner into the air and it came back down and hit him in the head.

Of course, the same results could have been achieved with a bowling ball, and I don't see anyone warning people about the dangers of those.

Anyhow: there's nothing evil about Fidget Spinners, and I hope that the wingnuts who are currently running around in circles making alarmed little squeaking noises will calm down.  It'll only be temporary, of course, because tonight they'll be back online, scouring the interwebz for another thing to freak out about.  It's a losing battle.
Posted by Gordon Bonnet at 2:11 AM