Yesterday's post, about the generally bizarre nature of dream content, prompted a friend and loyal reader of Skeptophilia, the amazing writer A. J. Aalto, to send me a link to a study done a while back in Switzerland that showed that our dream content sometimes forms a continuum with our waking experience.

The author and lead researcher, Sophie Schwartz of the Department of Neuroscience at the University of Geneva, did a clever study where volunteers were instructed to play the computer game Alpine Racer II, wherein the player stands on a movable platform that tracks his/her movements, while an avatar skis downhill on the computer screen.  To be successful in the game, the player has not only to exhibit balance, coordination, and motor skill, but to focus visually on the task and ignore any distractions.  Schwartz then had the players record their dream content, comparing it to people who had only watched the game, and control volunteers who had done an unrelated activity. 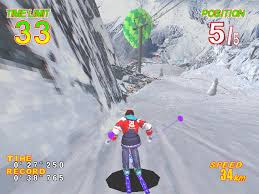 
After training on the Alpine Racer, 30% of spontaneous mentation collected at different times during pre-sleep wakefulness and light NREM sleep (up to 300 sec after sleep onset) contained imagery (of any modality, 24%) or thoughts (6%) related to the skiing game.  Wamsley et al. also found that imagery directly related to training on the game (unambiguous representations of the Alpine Racer or of skiing) declined across time.  This time-course was paralleled by a tendency for game-related incorporations to become more abstracted from the original experience.  These findings do not only provide empirical evidence for spontaneous memory replay during wakefulness and light NREM sleep (stages 1 and 2), but they show that reports of subjective experience offer valuable information about cognitive processes across changing brain states.

Schwartz acknowledges that the high rate of incorporation of skiing imagery into the players' dreams probably had to do with the degree of attention the game required:


High levels of incorporation of Alpine Racer are most plausibly related to the strong motivational and attentional involvement of the player during the game.  Consistent with this interpretation, a few participants who only observed those playing Alpine Racer also incorporated elements of the game into their sleep-onset mentation, at rates similar to the participants who were actively engaged in the game.  These effects and their time-course suggest that novelty may be a critical factor for the selection of material to be mentally replayed.  Moreover, many baseline night reports incorporated thought or imagery related to the game (compared to a control set of sleep-onset mentation reports), indicating that the mere anticipation of the task could trigger prospective memory processes that emerged at sleep onset.  It is tempting to speculate that hypnagogic imagery may contribute to the integration of recent experiences with long-term memories and future goals.

This is consistent with my wife's memories of being in graduate school and spending an inordinate amount of time avoiding doing her research by playing Tetris.  She realized she should probably stop when she started having dreams of brightly-colored blocks falling from the sky, and fortunately was able to curb her Tetris addiction before her adviser had to stage an intervention.

For myself, I can't say that I see a lot of incorporation of waking experience into my dreams.  Much of my dream content seems to fall squarely into the category of "What the fuck?", such as a recent dream wherein I was filling our bathtub with styrofoam peanuts, except they kept melting and running down the drain, which made even less sense when I looked up and realized that the bathtub wasn't in my house, it was in the middle of the Sahara Desert.

None of which, I can assure you without hesitation, was a continuation of anything I'd been doing that day.

I've also noticed a tendency in my more reality-based dreams to have more content with strong emotional charge than that with any connection to recent events.  I've been teaching for thirty years, and I still have frequent teaching-anxiety dreams -- that my students aren't listening or are misbehaving, that I get confused or off track during a lecture and can't remember what I'm supposed to be doing, even that I'm wandering around the halls in the school and can't find my classroom.  I also have dreams of losing loved ones or pets, dreams of witnessing violence, dreams of being trapped -- all of which have a powerful emotional content.

But I haven't noticed much tendency for my dream content to exhibit Schwartz's continuance from the waking state.  In fact, I can recall many times when I expected to dream about something -- when I've been involved all day in a project, or (especially) when I've watched a scary or emotionally powerful movie -- and it almost never happens.

So once more, we're back to dreams being mysterious, and any explanations we have regarding dream content being incomplete at best.  Which, of course, is part of their fascination.  I'll definitely be giving this topic more thought, once I've figured out what to do with all of these melted styrofoam peanuts.
Posted by Gordon Bonnet at 1:56 AM