Two weeks ago I wrote about how some overzealous evangelical Christians have denounced "Fidget Spinners" as being a demonic symbol, so when you spin it, you're invoking Satan or something.  Well, these people are nothing if not versatile.  Because yesterday I found out that some of the same lot are now saying no, Fidget Spinners aren't demonic; in fact, quite the opposite.

They actually represent the Holy Trinity.

I have to say that even in my churchgoing days, when I was trying like mad to understand and believe the whole shebang, the idea of the Holy Trinity never made much sense to me.  God, Jesus, and the Holy Spirit are distinct, but not; and the first one generates the other two, but actually they've all been around forever; and so on and so forth.  The Fourth Lateran Council of 1215 tried to clear the whole thing up with the following statement:


[I]t is the Father who generates, the Son who is begotten, and the Holy Spirit who proceeds; and in their relations with one another, they are stated to be one in all else, co-equal, co-eternal and consubstantial, and each is God, whole and entire.

Which really didn't help much.  Of course, in the interest of fairness I have to say that a lot of quantum physics isn't a whole hell of a lot better.  If you put the Holy Trinity up against quantum nonlocality and Bell's Theorem in a contest of purely counterintuitive weirdness, I'm not sure which would win.

The early church fathers, however, felt pretty strongly about "trinitarianism."  Believing otherwise, or even saying "this makes absolutely no sense," was enough to get you burned at the stake.  To forestall such unpleasantness, some religious folk tried to come up with ways of explaining it in simpler terms, such as the (almost certainly apocryphal) use of the shamrock by Saint Patrick to get across the three-in-one thing. 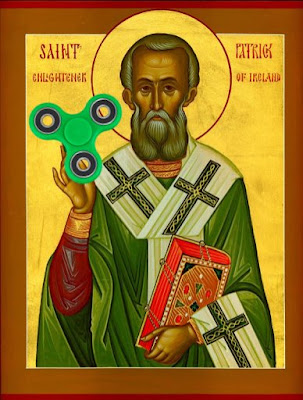 So I suppose, given the Fidget Spinner's shape, it was only natural someone would think of this.  Apparently more than one priest or minister has made the analogy, to judge by the responses of the parishioners on social media.  Some have been impressed:


You know your priest’s sermons are on point when he compares the Holy Trinity to a fidget spinner.

Others, not so much:


Today I watched a priest use a fidget spinner to represent the Holy Trinity and felt my soul leave my body.

But no one took umbrage over the whole thing as much as Toy Adams over at Unsettled Christianity, who said that to make the comparison was heresy:


Any time folks begin to teach on the Trinity and say, “the Trinity is like….” I immediately brace myself for impact.  Too often something inaccurate is said.  The Trinity is not only beyond our grasp, but if you teach on Him using objects like shamrocks, the states of water, an egg, or a fidget spinner, you are sure to commit heresy.

Not to be a heresy hunter, but heresy is serious.  Many pastor-types like to joke about being heretics, but, in all reality, it’s spiritually dangerous to flirt with heresies pertaining to the Trinity.

So if the Trinity isn't like a Fidget Spinner, what is it like?  Adams isn't so sure:


The Trinity is the doctrine by which we affirm God’s threeness in God’s oneness, celebrating the Father, Son, and Holy Spirit as three distinct persons who are of one substance; each person of the Trinity is fully God yet distinct.  To compare the Trinity to a fidget spinner (as with the shamrock) is to commit the heresy of partialism, for it undercuts the full divinity of each person, so as to indicate that each are only one part of a three part God...

To be spiritually vibrant, we must seek to properly understand who God is.  We know that God is Trinity, but such a mystery we cannot surely comprehend.

Which to me is the difference between this stuff and quantum mechanics.  Because QM is weird, but it is comprehensible.  No one looks at Schrödinger's Wave Equation and throws their hands into the air and says, "Welp.  You just have to take this on faith because it's revealed truth.  Don't expect to understand it."  (Okay, that was kind of my reaction when I took Quantum Mechanics from Dr. John Matese back in college, but I must admit that my attempt to master physics was, by and large, unsuccessful.  Let's just say that when I was 20, studying was not near the top of my priorities list, and leave it at that.)

So anyhow, to me it all seems like a tempest in a teapot, although given my own views I really couldn't be expected to come to any other conclusion.  I guess if the Fidget Spinner strengthens your religious beliefs, that's fine by me.  And if you think it's the "Devil's Yo-Yo" (a term I did not make up), then don't mess with 'em.  Either way, my general feeling is that you'd be better off studying quantum mechanics.
Posted by Gordon Bonnet at 2:02 AM