We'll discuss this at the meeting

Dave Barry once said, “If you had to identify, in one word, the reason why the human race has not achieved, and never will achieve, its full potential, that word would be 'meetings'."

To which I say: amen.  We are now at the end of another school year, for which there has been much rejoicing, mostly because it'll be another two and a half months before I have to attend another meeting.  I loathe meetings almost as much as I loathe grocery shopping.  Note that I am not talking about quick, to-the-point meetings, where vital information is conveyed in an efficient fashion. I wouldn't classify those as "fun," but I recognize that they're important.  No, I'm referring to meetings such as "educational training seminars," often run by professional seminar-runners (they probably have a fancier sounding job title, but don't deserve it).  Words cannot describe how much I detest these things.  I hate having my time wasted, I hate being expected to pretend I'm vitally interested in something that is pointless, and I hate being spoken to in a patronizing fashion.  And training seminars usually combine all three. 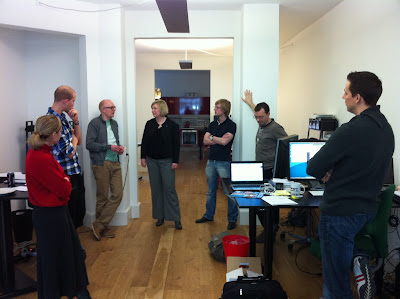 I thought that this type of meeting was unique to the world of education, but I found out I was wrong.   I was discussing this with Carol, and it seems that nursing training seminars are run pretty much the same way as educational ones are.  Here's the way a typical training seminar runs.  If you've never attended something like this, and you think I'm exaggerating, ask a teacher or nurse and they'll happily corroborate what I'm saying.

"Hi!  I'm Penelope Farklewhite-Smythe, and today's program is called 'Making Schools Better.'  We'll be brainstorming some ideas in just a minute, but first, we'll do an icebreaker activity.  On your table are some stickers with blue, red, green, or gold stars.   Pick up a sticker, and stick it to your forehead.  And then find three people with different color stars than you have, and tell them what you ate for breakfast today!"

"There, wasn't that fun?  I'm glad no one asked me what I had for breakfast, because I was so excited to come to today's training seminar, I couldn't eat breakfast!"

*overly cheerful grin, followed by a brief pause to wait for laughter, which doesn't come, except for the one person in the front of the room who feels sorry for the presenter and thinks she needs the support*

"Today we'll start by brainstorming some ideas.  I've assigned five people to each table.  Each of you has a job.  One of you will be the Scribe.  Once we've brainstormed some ideas for 'Making Schools Better' the scribe will write down each table's ideas on a piece of butcher paper.  Write in red for ideas that Help Students Succeed, green for ideas that Make Teachers Happy, and blue for ideas that Keep Parents From Voting Down The Budget.  Two of you are the Evaluators.  The Evaluators will critique the ideas.  They will rate each idea with five stars for the Most Important down to one star for the Least Important.  The last two people will be the Presenters, and will present the ideas to the rest of the faculty.  But to make it fun, you'll present each idea using only interpretive dance, and we'll all try to guess what the idea is."

You'd think that at this point, there would be guffaws of laughter, followed by the entire faculty (except the supportive person in the front of the room) standing up and leaving.  Astonishingly, this never happens.  Being obedient little sheep, we all follow right along, bleating softly, writing on the butcher paper and giving ideas four stars and doing the interpretive dances.  Never once have I seen anyone stand up and say, "This is the stupidest fucking thing I've ever heard, and I refuse to participate."

Which brings us to Skeptophilia's Two Questions of the Day:
No one I have ever talked to thinks these meetings are interesting, or enjoyable, or productive.  I, and most of my colleagues, leave such training seminars so pissed off that we spend the rest of the day looking for a small furry woodland animal to kick.  I also happen to know that the training seminars our school district has participated in have cost significant amounts of money -- some of these professional seminar-runners make upwards of a thousand dollars for a full day's presentation.   Which, incidentally, answers question #2 -- I doubt they really care if it's the best way to train professionals.  I might not care, either, if I could make a thousand bucks by ordering a bunch of presumably intelligent adults to wander around in a room with stickers on their foreheads talking about breakfast.

I find it frankly baffling, however, that the professional seminar-runners remain in business, given that the general consensus is that these seminars accomplish nothing and are therefore a gigantic waste of money and time.  So someone, somewhere, thinks that these things are productive.  Maybe it's the same people who came up with the idea of "paperwork" as being the best and most efficient way of keeping track of information.
Posted by Gordon Bonnet at 2:06 AM