I love science, but I really wish it would stop crushing my hopes and dreams.

I say this because it has long been my dream to live long enough to see unequivocal proof of the existence of intelligent life on other planets.  I got my start, alien-obsession-wise, when I was about seven and became addicted to the abysmal 1960s television series Lost in Space.  The aliens were pretty low-budget, judging by the fact that most of them were...

... well, human.  Like the alien cowboy, the alien pirate (complete with a mechanical parrot), the alien motorcycle gang, the alien teenage hippies, the alien Wild West gunslinger, and Brunhilde.  I'm not making this last one up.  In this not-to-be-missed cinematic tour de force, Brunhilde appears out of nowhere, wearing a helmet with wings, yo-to-hoing like mad while seated on the back of an enormous plastic horse.  In that episode, we also meet Thor, who thinks he has lost his strength and has gone all weepy, and Will Robinson has to give him a heartwarming pep talk to convince him that true strength comes from within.

If you can watch that episode without pissing your pants laughing, you have a stronger constitution than I have. 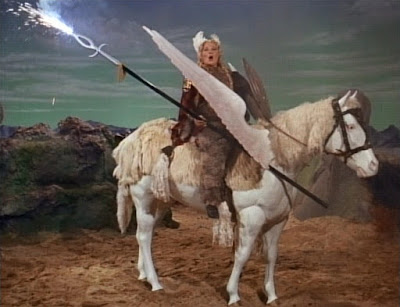 Things took a step up (well, okay, that was pretty much the only direction available) with the original Star Trek series, where they at least got rubber noses and colorful makeup for the aliens, and induced some of them to speak in cheesy faux-Russian accents to make it clear which ones were the bad guys.  But then came Star Wars and Close Encounters of the Third Kind and Star Trek: First Contact and Cocoon and Starman and the best of 'em all, Contact -- which remains one of my top favorite movies ever -- and I was completely and permanently hooked on the idea that there might be extraterrestrial intelligence.

The problem is, the evidence for life on other planets, much less intelligent life, is kind of nonexistent.  There have been radio telescopes scanning the sky for decades, and so far there's been nothing to answer to Enrico Fermi's famous quip, "Where is everybody?"

There was one possibility, however.  It's called the "Wow Signal" -- a 72-second burst of radio waves captured in 1977 by Ohio State University's "Big Ear" Radio Telescope.  It was such an anomaly that astronomer Jerry Ehman wrote "Wow!" next to the computer printout that contained the signal, thus giving the phenomenon its name.

The spot in the sky where the burst originated -- near the star Chi Sagittarii in the constellation Sagittarius -- has been repeatedly scanned, but the signal has never been repeated.

So what was it?  The hopeful amongst us (which included me) thought it might be a radio transmission from intelligent life.  The more dubious figured there had to be some kind of more prosaic explanation -- but what that explanation might be, no one knew.  So I held on to the Wow Signal as being a real possibility for the realization of my dream.

Antonio Paris, of the Center for Planetary Science at the Washington Academy of Sciences, shot down the extraterrestrial intelligence hypothesis this week with a neat, and completely plausible, explanation of the Wow Signal as the emission from the hydrogen-rich comet 266/P Christensen -- which was in that exact location when the signal was detected.


In 2016, we proposed a hypothesis arguing that a comet and/or its hydrogen cloud was a strong candidate for the source of the “Wow!” Signal.  From 27 November 2016 to 24 February 2017, we conducted 200 observations in the radio spectrum to validate the hypothesis.  This investigation discovered that comets 266/P Christensen, P/2013 EW90 (Tenagra), P/2016 J1-A (PANSTARRS), and 237P/LINEAR emitted radio waves at 1420 MHz.  In addition, the data collected during this investigation demonstrated there is a well-defined distinction between radio signals emitted from known celestial sources and comets, including comet 266/P Christensen...  To dismiss the source of the radio signal as emission from comet 266/P Christensen, we repositioned the telescope away from the comet and conducted clear sky observations when the comet was not near the coordinates of the “Wow!” Signal.  During these clear sky observations, we detected no significant radio signal at 1420 MHz.  This investigation, therefore, has concluded that cometary spectra are observable at 1420 MHz and that the 1977 “Wow!” Signal was a natural phenomenon from a Solar System body.

To Dr. Paris, I have the following to say: "Nicely done!  Outstanding research!  I hate you!"  *grinds teeth*

So for us alien aficionados, it's one more dashed hope.  I mean, I'm supportive of science, and I appreciate the hard work and rigor, but really.  Leave me something to cling to, okay?  Because at the moment, all I'm left with is Brunhilde, and the yo-to-hoing is getting really annoying.
Posted by Gordon Bonnet at 2:42 AM