In the past few months, I can't escape the feeling that we here in the United States have thrown the throttle into full reverse.

I mean, consider it.  We've gone from having a president who respected and trusted scientists to one who just two days ago gave a speech about reviving the National Space Council that was so blitheringly stupid that it was somewhere in that rarefied atmosphere beyond cringe-worthy.  And he gave said speech in front of legendary astronaut Buzz Aldrin, who stood there the entire time with a "what the fuck is wrong with you?" look on his face.  Here is a sampler:


And security is going to be a very big factor with respect to space and space exploration.   At some point in the future, we’re going to look back and say how did we do it without space?...  We know what this is, space.  That’s all it has to say, space.  There's a lot of room out there, right?  This is infinity here.  It could be infinity.  We don’t really don’t know.  But it could be.  It has to be something, but it could be infinity, right?

I defy you to listen to the whole thing without saying, "Merciful heavens, you are the most idiotic creature in the entire known universe." 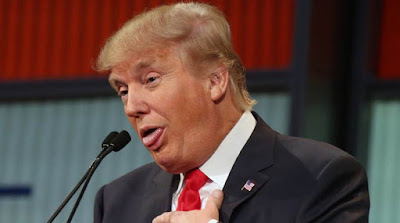 If that's not enough evidence that we've gone into regress, we have the resurgence of paranoia over godlessness.  This was one of the hallmarks of the 50s -- in fact, it was the atheism of the communists, especially in Russia, that spurred our leaders to mandate the words "In God We Trust" on our currency and "One Nation Under God" in the Pledge of Allegiance.  And now, we're once again sinking deep into fear talk -- and a consequent angry backlash -- regarding the diminishment of influence of Christianity.  Trump had something to say about this, too, this time at a "Freedom Rally" at the Kennedy Center:


My administration will always support and defend your religious liberty.  As long as I am President, no one is going to stop you from practicing your faith or from preaching what is in your heart...  Our earthly rights are given to us by God, and no force can take those rights away...  Families and churches, not government officials, know best how to create a strong and loving community.  In America, above all else, we know this; we don't worship government, we worship God.  Our religious liberty is enshrined in the very first amendment in the Bill of Rights.  The American founders invoked our creator four times in the Declaration of Independence.  Benjamin Franklin reminded his colleagues at the Constitutional Convention to begin by bowing their heads in prayer.  I remind you, we’re going to start saying Merry Christmas again.

So there you have it.  We're already talking about the "war on Christmas."

But nowhere is the rush backwards more evident than in the resurgence of "religious liberty laws," which are (one and all) designed to assure the liberty of Christians to do whatever they damn well please, at the expense of anyone they disapprove of or wish to discriminate against.  Just last week, in fact, one of them succeeded in being signed into law in the state of Florida -- House Bill 989, which allows people to object to (and exempt their children from) specific instructional materials in public schools.

And guess which two have already come up?  You'll never guess.

If you can imagine.  How dare science teachers teach science as if it were actually correct?

The success of HB 989 is empowering anti-science groups in other states to launch their own efforts to hamstring science education in public schools, thereby ensuring that yet another generation will be raised without a basic understanding of the scientific method.

Which, I suppose, plays right into the hands of Trump et al., because it's hard to see how anyone with even a rudimentary understanding of science could support someone who is so obviously a near illiterate.

I'm trying hard not to be discouraged about all of this, because despair is rarely a catalyst for anything other than curling up in a corner and sobbing.  But right now, our regression into the superstition and paranoia of our past is seeming overwhelming -- and profoundly frightening.  I can only hope that saner heads will prevail, and that the damage done in the interim will be fixable.

But at the moment, all I seem to be able to do is to watch as the daily horror show unfolds in front of me, and try not to weep.
Posted by Gordon Bonnet at 1:26 AM