A musician friend of mine, a flutist of tremendous talent, drive, and skill, was diagnosed with leukemia when she was seventeen years old, only months before her high school graduation.  This was (of course) a devastating blow to a young woman with aspirations to head off to college and pursue a career as a professional musician, but fate often intervenes in the best-laid plans (as Robert Burns said much more eloquently).

She began chemotherapy almost immediately after the diagnosis.  The process was excruciating.  She experienced all of the familiar awful side effects -- hair loss, weakness, nausea, headache.  She lost weight, and felt fatigue so crushing that it was hard for her to do anything other than sleep.  Her family and friends rallied around her, and she called on her own strength of spirit to get her through the pain.

And she made it.  The leukemia went into remission.  She was able to resume normal activities, including playing her beloved flute.  She's been cancer-free for over five years now -- and is soon to release her first album. 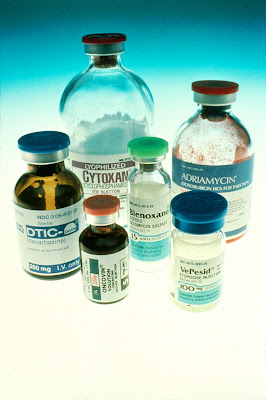 It's stories like this that are why I become apoplectic with rage when I read things like a post that came out at The Mind Unleashed last week.  Entitled, "Chemotherapy Proven to Spread Cancer, Cause Lethal Tumors in Groundbreaking New Study," the writer begins with a bang by saying, "Albert Einstein College of Medicine proves chemotherapy is a cash machine for Big Pharma."  The post goes on to say:


In a groundbreaking new study, they’ve proven that chemotherapy causes cancer cells to spread throughout the body – to replicate themselves, making your cancer worse, not better...  The researchers, George S. Karagiannis, Jessica M. Pastoriza, Yarong Wang, Allison S. Harney, et all, suggest that though chemotherapy may shrink a cancerous tumor, but it simply sends the cancer cells off into other parts of the body to rebuild into yet additional destructive tumors.

This study makes a massive move in exposing the perpetual fraud of the chemotherapy/cancer industry. In American alone, it’s a $200 billion-dollar industry. It’s part of the reason why our insurance premiums are ridiculously high, and unassuming cancer sufferers, keep suffering.

Of course, the Karagiannis et al. paper, released earlier this month in Science, says nothing of the sort.  Here's the summary of the study the editors of the journal wrote:


Breast cancer is one of the most common tumor types, and metastasis greatly increases the risk of death from this disease.  By studying the process of intravasation or entry of cells into the vasculature, Karagiannis et al. discovered that, in addition to killing tumor cells, chemotherapy treatment can also increase intravasation.  Groups of cells collectively known as tumor microenvironment of metastasis (TMEM) can serve as gateways for tumor cells entering the vasculature, and the authors discovered that several types of chemotherapy can increase the amounts of TMEM complexes and circulating tumor cells in the bloodstream.  The researchers also determined that a drug called rebastinib can interfere with TMEM activity and help overcome the increased risk of cancer cell dissemination.

Two things stand out.  The researchers studied one type of cancer -- breast cancer.  Chemotherapy differs greatly depending on cancer type, so it's highly unlikely that all chemotherapy increases TMEM production.  Second, and most important: did you catch the last line?

They showed that the drug rebastinib acts to prevent metastasis, thus removing any increased risk of TMEM formation resulting from the chemotherapy.

So basically, it's the opposite of what the people over at The Mind Unleashed claimed.  If "Big Pharma" wants us all to stay sick and keep suffering, they're doing a pretty lousy job.  Humans in industrialized countries have the highest overall life span, and (more importantly) the best health, of any society the world has ever seen.  A lot of the credit for this goes to the medical establishment -- especially the development of vaccines and antibiotics.  And the cancer sufferers who owe their lives to chemotherapy far outnumber the ones whose cancer recurred or metastasized due to the drugs they were given.

In other words: the article at The Mind Unleashed is misleading at best, and an outright bald-faced lie at worst.  They took a study whose title seemed to give some vague support to their anti-science stance, and (apparently without reading the actual paper itself) claimed that it proved that "Big Pharma" is engaging in some kind of giant conspiracy to make us all sick.

And this is not just an ordinary lie; it's a downright dangerous one.  Most of us aren't scientists, and a paper like Karagiannis et al. is beyond our ability to comprehend in anything more than a superficial manner.  On the other hand, bullshit alarmism like what I found over at The Mind Unleashed is easy to read -- and easy to swallow whole.  As we've seen more than once here at Skeptophilia, emotional appeals usually work better than intellectual ones.  If you hook into people's fears, you're likely to convince them even if what you're saying makes no rational sense whatsoever.

So what we have here is a claim that could very well make cancer patients -- who are already likely to be in a maelstrom of worry, doubt, and anguish -- decide that what their doctors are recommending is just going to make them worse.  Add to that the fact that even the best chemotherapies cause pretty unpleasant side effects, and you get a toxic combination that could well persuade someone to forgo treatment, or opt for some useless quack "alternative medicine" instead.

The case of Steve Jobs bears remembering -- who, when he was diagnosed with pancreatic cancer, delayed conventional treatment for nine months, opting instead for "alternative medicine" and changes in diet.  Jobs realized his mistake, but too late.  "He wanted to talk about it, how he regretted it," his biographer, Walter Isaacson, said.  "I think he felt he should have been operated on sooner...  I think he felt: if you ignore something you don't want to exist, you can have magical thinking.  It had worked for him in the past.  He did end up regretting it."

In the case of my musician friend, the situation is crystal-clear.  If she had chosen to ignore the advice of her doctors and avoid chemotherapy, she would have died.  Pure and simple.  We are fortunate enough to have a fine person and truly talented flutist still with us, living a healthy and productive life, because of "Big Pharma's chemotherapy/cancer industry."

And the biased, anti-scientific ignorance the people over at The Mind Unleashed are peddling is 100% USDA Grade-A bullshit.
Posted by Gordon Bonnet at 4:03 AM