I just got back yesterday from my expedition to Ecuador with the phenomenal birding tour company Wings, an outfit which I cannot recommend highly enough.  As I mentioned in my previous post, I love Ecuador, but with the planning and leadership of a Wings guide, this was a really special trip.

We spent most of the time near the charming town of Mindo, in a lodge called Séptimo Paraiso (Seventh Heaven).   The name is apt.  The lodge was comfortable, the food was great, and the hikes and birding were stupendous.  In nine days I saw 273 species of birds.  (If you want to get an idea of the phenomenal biodiversity of this tiny country, you should know that 37 of the species I saw were different kinds of tanager, and 43 were hummingbirds.  For comparison purposes, here in upstate New York, we have two tanagers -- one of them quite rare -- and only one kind of hummingbird.)

Of course, the birds aren't the whole reason I love Ecuador.  The scenery is amazing, largely due to the steep-sided ridges and rushing rivers of the Andes.  The weather (where I was, at least) was refreshingly mild -- 80 F during the day, down to maybe 55 F at night. 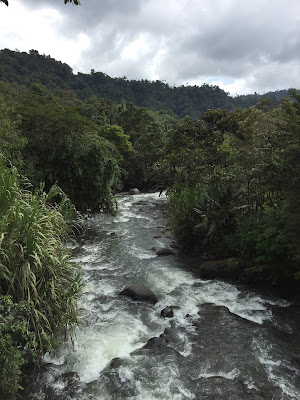 Rio Mindo [all photographs, unless otherwise marked, were taken by me]

Séptimo Paraiso sits at 0 degrees, 0 minutes, 2 seconds south latitude.  That means the front door was, give or take, 200 feet from the Equator.  We used a GPS on one of our outings to find the exact spot -- within appropriate error bars, of course -- and I took a picture of our entire group straddling it. 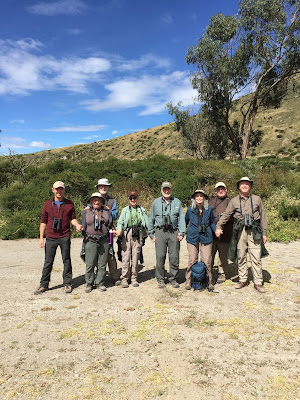 Besides the avifauna, the plant life is fantastic as well.  (And the two are intimately connected; the flora are usually specialized to be pollinated by one particular bird, butterfly, moth, or bat, so high diversity in fauna usually implies high diversity in flora.)  I consider myself a fairly competent field botanist, but I was seldom able to identify plants beyond family, and sometimes not even that.  That, of course, didn't stop me from appreciating them. 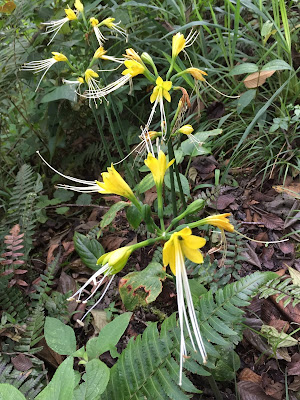 "Something in the amaryllis family" is the best I could do with this one.  But it sure is pretty, isn't it?

We did have more than a few truly stunning birds, of course.  Three of them that stand out in my mind are the rare Scarlet-bellied Dacnis, which our guide said we were really amazingly lucky to see: 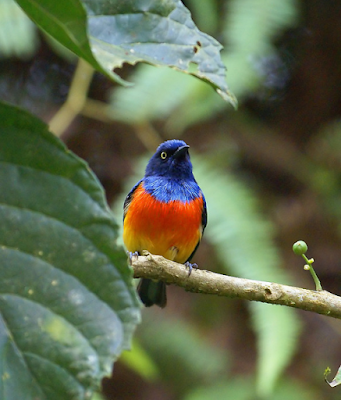 The Torrent Duck, which is somehow able to swim upstream in rivers that would easily knock a grown man off his feet: 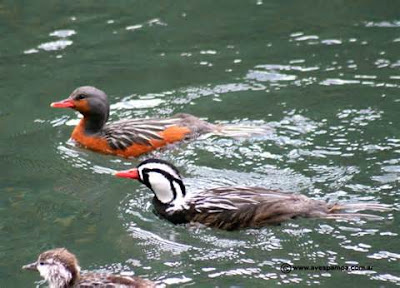 And a Crimson-mantled Woodpecker that positively modeled for the camera: 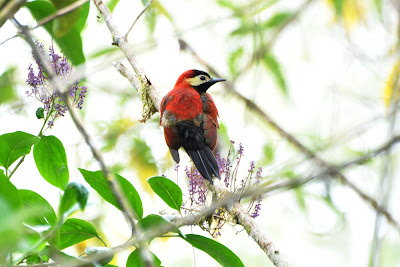 One of the difficulties of birding as a hobby, however, is that it does not cater to late risers.  I consider myself something of a lark, but after six days of getting up at four in the morning, it was beginning to wear on me a little: 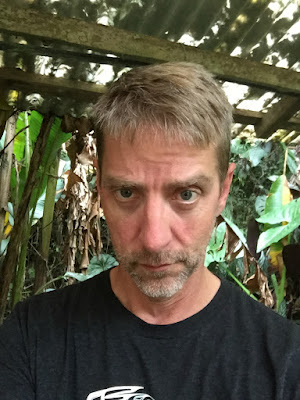 Me in the lounge at Séptimo Paraiso, waiting for some kind soul to bring me a glass of wine and rub my aching feet

The altitude was also a bit tricky.  On day trips into the highlands, all of us became breathless after even brief walks uphill.  The highest we went was 14,400 feet, at Papallacta Pass, but it was foggy and spitting rain (and windy and about 35 F), so I didn't get any pictures.  I did get a few nice shots of Yanacocha, at 13,200 feet: 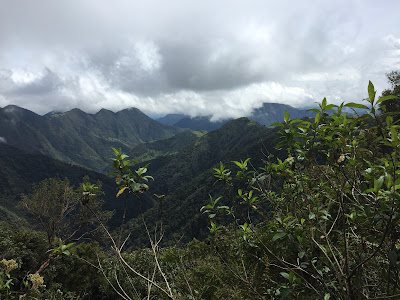 I'm hoping that all of this hiking around up in the mountains will translate to better endurance for running here at home.  We'll see how that goes.

Anyhow, all in all it was a fantastic trip.  To end this, here are a few things I learned about Ecuador on this trip:
Anyhow, there you are -- a brief travelogue of a wonderful country.  I know I'll be back.  You can't do justice to a place like this in just one or two short visits.

I'm thinking a few years would do the trick.
Posted by Gordon Bonnet at 2:37 AM