Hey, you, get offa my cloud

Along Cayuga Lake, near where I live, is Milliken Station Power Plant.  On cool days its smokestack can be seen topped with a plume of steam.   Nearby is Portland Point, a renowned Devonian fossil-collecting site.

It was the fossils that brought a ninth-grade Earth Science class there, some years ago, which I had been asked to help chaperone.  The kids were all happily mucking around in the shale, looking for fossils, when one young lady -- who was known not to be overendowed with brains -- looked over at the nearby power plant smokestack, and said, wonder in her voice, "So that's where clouds come from!"

There are times when my natural compassion and my tendency to guffaw at people who say stupid things do war with each other.  I think I didn't laugh at her, but it was an effort.

But lest you think that this lack of understanding about concepts like "water vapor" and "condensation" is limited to this long-ago student, allow me to introduce you to Diane Tessman.  Now, Diane doesn't think, as our student did, that clouds are manufactured in Ithaca, New York and then exported all over the world.  No, that would be ridiculous.

Diane Tessman believes clouds are manufactured by UFOs as camouflage.

At first, I thought her claims were a joke, intended to make fun of the whole UFO/alien coverup crowd.  Sadly, it is not.  She has written an entire article in which she describes how alien spacecraft produce clouds to hide within or behind.  These are not oddly-shaped clouds, Ms. Tessman says; no, they are ordinary, puffy white cumulus clouds, because hiding behind an oddly-shaped cloud would call attention to the UFO instead of hiding it. 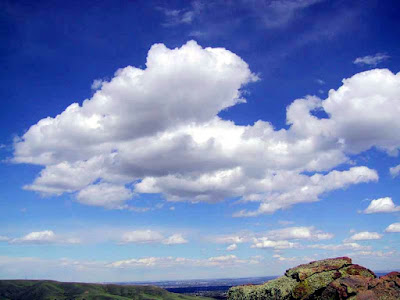 [image courtesy of photographer Michael Jastremski and the Wikimedia Commons]

By this point, you're probably asking yourself: if they don't look any different, how can I tell a UFO cloud from a regular cloud?  Answer: you can't.  You just have to watch a bunch of clouds, and wait until the camouflage slips and you see a UFO.

It's kind of an odd camouflage, when you think about it.  Picture yourself as the alien captain, on a mission to conquer Earth, and there you are, sitting inside a cloud, just drifting along with the other, non-UFO-generated clouds.  You can't change direction or speed, because it's not like the cloud is going to come along with you.  It means that whatever your mission was intended to accomplish, you'd better hope that it was downwind of your current position, and not needing attention any time soon:

Alien Captain:  *slams fist into his palm*  Drat!  There's nothing we can do about it!  We've got to stay inside this cloud, and the wind is blowing the wrong way!  Where can we float over and bomb into rubble?

Alien First Officer: "On this course, our next possible target is..." *consults map* "...Newark."

Alien Captain:  Dammit!  That won't do!  No one will be able to tell!

Of course, Ms. Tessman says, we also have to consider the possibility that clouds may not just be camouflage; it's possible that clouds are naturally generated by "dimensional travel."

The whole thing is kind of spooky, isn't it? How many times have we had nice picnics on beautiful summer days, and lain on blankets looking up at the peaceful white clouds sailing by?  Now, you have to wonder how many of those clouds hid evil aliens, spying on us, waiting until we fall asleep so they can steal the oatmeal-raisin cookies we brought for dessert.

At this point, some of you may be questioning Ms. Tessman's credentials.  If so, they're provided at the end of the article.  She states that she is a former public school teacher; one can only hope that her subject wasn't physics.  She participated in many projects with MUFON (the Mutual UFO Network), and after many years discovered that she had a personal reason for her interest; while under hypnosis, she discovered that as a child she had been visited by, and had "shared consciousness with," an alien being called "Tibus."  Tibus has apparently provided her with such vital information as the fact that hurricanes are dangerous and it's a problem when a nuclear power plant explodes.  Considering Katrina and the meltdown at Fukushima, I think we can definitely all agree that Tibus knows what he's talking about.

But mainly, I'm glad that we now have an explanation for clouds other than Milliken Station Power Plant.  Because frankly, given the demand for clouds in places like the Amazon Rain Forest, it's been hard for Milliken Station to keep up with production quotas.  It's a relief to know that all we have to do is to send some UFOs down there to do "dimensional travel," and there will be clouds aplenty.
Posted by Gordon Bonnet at 2:58 AM