Invasion of the star jelly

Skeptics and rationalists hear the accusation rather frequently that their assumption that everything has a rational explanation is as much a faith as any religion is.  Our conviction that all allegations of paranormal phenomena -- aliens, precognition, ghosts, witchcraft, and so on -- are probably bunk is based on an assumption about how the world works, and because it is an assumption, it is by definition an irrationally-held unprovable assertion.

Take the case of "Star Jelly."  The Lake District, in northern England, just had a bout of Star Jelly a few weeks ago, following a wind and rain storm.  What is it, you might ask?  Not something, I hasten to state, that you'd want to use to accompany your peanut butter sandwich.  Star Jelly is a whitish, gelatinous substance, sometimes found in great globs, out in the woods and hillsides -- usually discovered in the early morning, as if it had appeared suddenly at night. It was first recorded in the 14th century, and has since shown up hundreds of times -- most famously as a two-meter wide disk that showed up near Philadelphia in 1950, inspiring the movie The Blob. 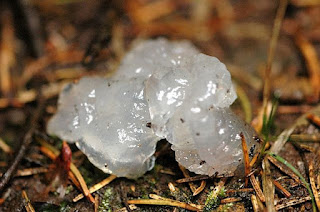 [image courtesy of photographer James Lindsey and the Wikimedia Commons]

What is it, though?  This is where it gets interesting.  Because apparently scientists have not been able to come up with a definitive answer.  The two most common answers -- that it is a mucusy material made by slime molds, or by a species of cyanobacteria called Nostoc -- are unproven.   Analysis of bits of Star Jelly have failed to show any traces of DNA, which you would expect to find if either of the above explanations are true.  Then the woo-woos got involved.  Star Jelly is, they say, one of the following:
None of those explanations appeal to me, frankly, especially the last one.  You'd think that if aliens spent all of this time and effort to get to Earth, they'd have better things to do once they got here than to jack off outside during a rainstorm in the Lake District.

I'm the first to admit, however, that the scientific explanations that have been proffered thus far haven't really knocked my socks off.  But nonetheless, I'm still convinced that there has to be a reasonable explanation for the appearance of the mysterious substance.  Why is that?

A study published in 2008 in the neurology journal Cortex made the interesting claim that rationalism and a belief in the paranormal both arose from an underlying brain structure issue -- specifically, that belief in paranormal explanations was correlated with a high degree of cerebral asymmetry.  People who held paranormal beliefs, said lead researcher Günter Schulter, had undergone "perturbations in fetal development" that led to differences in the way the cerebrum was wired.  A study the following year at the University of Toronto showed that the religious and non-religious also showed a difference in brain activity, particularly in the region called the anterior cingulate cortex, a part of the brain adapted for coping with anxiety.

So is rationalism merely a product of brain physiology, and do the critics of skepticism have a point in saying that it is itself a religion?  While our assumption that everything has a rational explanation is just that -- an assumption -- we do have one very powerful argument for our views: Rationalism works.  There are countless examples of phenomena that were once unexplained (or given paranormal explanations) that later were, by the application of basic scientific principles, successfully accounted for with no need for recourse to the paranormal.  To cite one example, which got a lot of airtime with the woo-woos -- remember the orange glop that washed ashore in huge quantities near Kivalina, Alaska a while back, prompting speculation very similar to the aforementioned Star Jelly theories?  (No one, however, seemed inclined to attribute its appearance to masturbating aliens, but otherwise the explanations were much the same.)  Well, the scientists kept saying, "We don't know what it is yet, but it has to be a naturally-occurring substance."  And after study, guess what they found?  It was eggs -- the eggs of a perfectly natural marine invertebrate species.  Rationalism wins again!

Or, to quote the inimitable Tim Minchin: "Throughout history, every mystery ever solved has turned out to be Not Magic."

As far as the Star Jelly -- I'm not troubled by the fact that they haven't figured it out yet.  I'm confident that with study, this will fall to the methods of science just as so many other mysteries have in the past.  So if my skepticism is just a product of my brain's symmetry, or its overactive anterior cingulate cortex, that's okay by me -- because whatever the cause, it has a pretty good track record of leading me to the right answers.
Posted by Gordon Bonnet at 4:41 AM