The Texas Sharpshooter Fallacy is the practice of picking out the data points, after the fact, that support whatever your claim is.  The name comes from the story of a guy traveling across Texas.  He sees an old barn with bullseyes painted on the side, and in the exact center of each bullseye is a bullet hole.  The guy sees two old-timers leaning against a fence near the barn, so he stops to talk to them.

"Who shot the holes in that barn?" the guy asks.

One of the old-timers says proudly, "I did."

"That some pretty fancy shooting.  You must be good."

The old-timer is about to reply when his friend chimes in, "Nah.  He's a lousy shot.  He got drunk one night, shot some holes in the side of his barn, and then painted the bullseyes around them."

The whole thing comes up because of a link sent to me by a loyal reader of Skeptophilia yesterday with the comment, "Hoo boy.  Get a load of this."  The link was to the homepage of the Zion Oil and Gas Company, whose raison d'être is... well, let me give it to you in their own words:


When first visiting Israel in 1983, I believe that God gave me a scripture (I Kings 8: 41- 43), a vision (Oil for Israel) and, as a Christian Zionist and New Covenant believer (Isaiah 65:1), the calling to render assistance to the Jewish people and Nation of Israel, and to aid them in the Restoration of the Land by providing the oil and gas necessary to maintain their political and economic independence.

Zion is a testimony and a journey of faith, which began for me when I was saved, or born again, in January 1981.  This testimony is based only on God’s faithfulness to the Jewish people and the Nation of Israel (Genesis 17:1-8).

Jim Spillman came to Zion Temple in Clawson, Michigan in February 1981 and taught on “The Oil of Israel“; by faith I believed it and The Great Treasure Hunt.  God used Jim Spillman first in my life to deposit the vision for the oil in my heart.

Yup, you read that correctly.  The CEO and founder of Zion Oil and Gas, John Brown, started his company because he thought he was anointed by god to find oil for the United States and Israel.  Not only that, he uses the Book of Genesis, and the account of the Great Flood, to tell him where to drill:


God creates this.  He provides the money and the place where to drill. Now why we haven't got the oil yet, I don't know.  I have never drilled one oil well I didn't expect to find oil...  He talks specifically about the land of Joseph and the blessings of the deep that lies beneath.  It doesn't say specifically oil, but there's a huge possibility it could be, let's put it that way.

In fact, the motto of the company is, "Geology confirming theology."  (If you want more in-depth information about Brown and his company, check out the article about Zion on RationalWiki.)

The only problem is that Zion's batting average so far is... zero.  They've drilled four wells in Israel, at great expense to their stockholders, and every one has been a dry well.  The result: $130 million down the drain, and a 90% loss of their stock's value on NASDAQ. 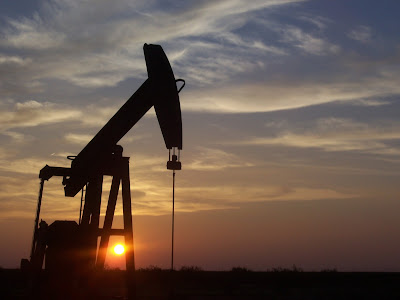 [image courtesy of photographer Eric Kounce and the Wikimedia Commons]

Unsurprisingly, given the mindset of people who would fall for this in the first place, this zero return on investment has not been as discouraging as you'd expect.  One of them, one Andy Barron of Temple, Texas, was quoted in the above-linked article as saying, "Well, I used to have a lot more money in it than I do now.  The stock I bought has tremendously decreased in value over time.  But with my belief that God is in charge of all of it and it's all his anyway, I think the upside of betting on God is pretty good."

Another supporter, Hal Lindsey (whose name may be familiar from his cheery End Times books The Late Great Planet Earth and Satan is Alive and Well on Planet Earth), said that even though things haven't gone well, they're about to, and furthermore, that's an indication that the world is about to end.  "Zion Oil right now is on the verge of discovering oil," Lindsey said.  "[It is a sign that] we are really on the very threshold of Lord Jesus's return."

So that's using a prophecy to support an oil drilling operation that has had zero success, and claiming that supports a different prophecy.  Which should win some sort of award for pretzel logic.

But you can bet if Zion does strike oil at some point, John Brown and his pals will shout from the rooftops about how this proves the prophecies and the Great Flood and his company being blessed by god and whatnot.  Thus the Texas Sharpshooter Fallacy that I started with.  Given long enough, you can find incidental support for damn near anything, especially when you choose to ignore all of the failures.

Anyhow, that's today's exercise in wishful thinking.  All of which supports the idea that even though religion -- in at least some circumstances -- can be a decent guide to moral behavior, it's a lousy substitute for science.  Oh, yeah, and caveat emptor.  Not to mention "a fool and his money are soon parted."
Posted by Gordon Bonnet at 3:39 AM