Regular readers of Skeptophilia know how much I respect science, and the women and men who have devoted their lives to increasing our understanding of how things work.  The curiosity, drive, intelligence, and creativity of scientists have provided us not only with stunning technological and medical advances, but basic knowledge about everything from the origins of life to the bizarre and counterintuitive behavior of the subatomic particles that make up all the matter in the universe.

Still, scientists are only human.  They make mistakes, misunderstand what the data mean, follow leads in the wrong direction.

Fortunately, science self-corrects.  It still baffles me when people think self-correction in science is a weakness; I call this the "Everything About This Could Be Proven Wrong Tomorrow" argument.  Why anyone would think that a system of knowledge that either couldn't detect errors, or else simply ignored them, would be preferable, is beyond me.

We had a great example of science's capacity to self-correct just this week, in a paper that came out in the journal Cell.  "Sensing Self and Foreign Circular RNAs by Intron Identity," by Y. Grace Chen, Myoungjoo V. Kim, Xingqi Chen, Pedro J. Batista, Saeko Aoyama, Jeremy E. Wilusz, Akiko Iwasaki, and Howard Y. Chang, of Stanford University, the Yale School of Medicine, and the University of Pennsylvania, sounds at first like something that would only be interesting to genetics geeks like myself.  To see why it's much more than this will take a bit of background explanation.

Our traits, and the traits of every living thing on Earth, arise through a pair of processes called transcription and translation.  DNA, as you undoubtedly know, is the master set of instructions for building everything in your body; but somehow, that information has to then direct our cells to produce brown hair or A+ blood type or resistance to malaria or any of a thousand different other features of our bodies.

The way it does that is through synthesizing proteins that then are responsible for guiding everything.  The synthesis of these proteins takes two steps.  The first, transcription, is a little like making a temporary copy (called mRNA) of the instructions from a single page of a cookbook (the DNA).  Then, a structure in the cell called the ribosome reads the copied page (the mRNA), and makes the chocolate cake or honey-glazed spare ribs or eggs Benedict -- whatever the instructions say (those finished dishes represent the proteins). 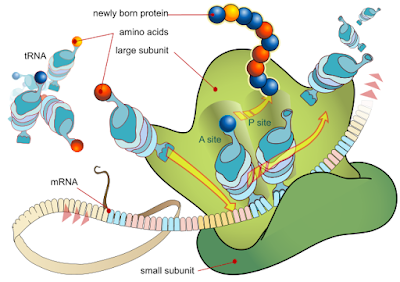 Our master cookbook -- the DNA in every single cell in our body -- has, according to most estimates, about 30,000 different recipes.  This gives you an idea of how genetic disorders occur -- they happen when one of the recipes has a mistake, produces too much of its final product, or doesn't get read at all.

Anyhow, back in the 1950s and 1960s, when scientists were first figuring out how all of this worked, they assumed that most of the DNA was made up of actual, readable recipes, that produced something essential for the cell.  Otherwise, why would it be there?

So it came as a bit of surprise when it was found that a significant portion of your DNA -- early estimates said it could be as much as 40% -- is "noncoding."  In other words, it's made up of recipes that don't make anything.  This noncoding DNA was derisively labeled "junk DNA" -- although why such a high proportion of our genetic material would have no function whatsoever was a considerable mystery.

I was pretty skeptical about the "junk" epithet right from the get-go.  For one thing, you'd think that stretches of DNA that had no function would eventually get scrambled by random mutations, but at least some of them have patterns (such as the tandem repeat sequences -- regions of DNA that have the same base sequence repeated over and over, and which are remarkably similar even in distantly-related species).  The fact that these patterns get preserved through millions of years of evolutionary distance indicates that changing them causes problems -- i.e., they do have some function, even if we don't know what it is.

Some "junk DNA" probably does deserve the title, of course.  We have old, damaged copies of genes floating around in our DNA, which don't ever get transcribed and simply are hangers-on from our distant ancestors.  We also have odd things called transposons, which are genes that almost act like independent life forms, copying themselves and splicing the copies elsewhere in our genomes.  (Some of those transposons are functional in switching genes on and off, but others are more like intranuclear parasites.)

Anyhow, my point is that I've long suspected that most of the noncoding DNA would turn out not to be useless after all.  And the paper by Chen et al. has just shown us that some of what seemed to be the junkiest of junk DNA -- the introns, pieces of DNA that are transcribed into mRNA but then cut out before the process of translation -- might have a function that is downright critical.

What the paper in Cell suggests is that these introns -- the leftovers bits of RNA after they're spliced out following transcription -- could have a role in the detection of "non-self" -- i.e., the basis of our immune systems.  Chen et al. write:

Which I think is astonishing.  These chunks of RNA, which have been compared to the full-page advertisements in a magazine article that you can tear out and throw away without losing any information, might well have a role in protecting us from infection by viruses.  How exactly they do this is beyond the scope of the current study; but just the fact that this is possible will open up huge avenues for research, possibly even leading to treatments for hitherto intractable viral infections.

So what were once derisively considered useless stretches of DNA now appear to be downright critical.  All of which brings me back to my original point; that science is powerful because it has a methodology for sifting out and correcting errors or misunderstandings.  Without that, there would be no progress -- no way, in fact, for us to discern and excise the junk in our knowledge about the universe.
Posted by Gordon Bonnet at 3:06 AM