A while back my cousin Carla from New Mexico brought to my attention a paranormal phenomenon I had never heard of before.  Carla's husband Dan is a geography professor at New Mexico State University, and the three of us basically have the same approach to the paranormal; namely to discuss it with grave expressions, drawing up maps, passing back and forth grainy, blurred photographs of ghosts, UFOs, and sasquatches ("sasquatchi?" "sasquatchim?" There's got to be a more entertaining plural than "sasquatches"), and examining evidence of Ancient Astronauts Visiting the Earth.  Then we all burst into guffaws because we just can't take it any more.

In any case, Dan (code name: Dr. Monsoon Havoc, B.S., M.S., Ph.D., President, and Director of the Department of Multi-Dimensional Topography) and Carla (code name: Cria Havoc, Vice President, and Director of the Department of Hermetics, Hermeneutics, and Historiography) kindly inducted me two years ago into their organization, ISNOT (Institute for the Study of Non-Objective Theories).   (My code name: Gordon "Whirlwind" McTeague, Director of the Department of Exobiology and Cryptozoology, a.k.a. "The Blond Yeti").  Since then, it's been one adventure after another, as we investigated reports of El Chupacabra, the Connecticut Hill Monster (the upstate New York cousin of Bigfoot), and various sightings of the face of Jesus on grilled cheese sandwiches.  But now... now, we have a serious matter to look into.

Carla/Cria sent me a link with information about a place called the Zone of Silence.  This spot, located about 400 miles from El Paso, Texas, and near the point where the borders of the Mexican states of Coahuila, Chihuahua, and Durango meet, has a lot of the same characteristics as the Bermuda Triangle.  Within this area, "radio and TV signals... are gobbled up," "strange lights or fireballs (maneuver) at night, changing colors, hanging motionless and then taking off at great speed," and there are falls of "small metallic balls... known locally as guíjolas," which are "collected by locals and visitors alike, and treated with great reverence."

My thought on this last part is that if you are the sort of person who might be tempted to treat a small metallic ball with great reverence, you probably should not be allowed to wander about in the desert unaccompanied.

One difference between this place and the Bermuda Triangle is that being dry land (extremely dry, in this case), the Zone of Silence can also host honest-to-Fox-Mulder Close Encounters of the Third Kind.  There have been several reports of meetings with "tall, blond individuals," who spoke flawless Spanish "with a musical ring."  In one case, they were wearing yellow raincoats, and helped some lost travelers whose car was stuck in the mud during one of the area's infrequent, but torrential, downpours.  This is encouraging; most of the other aliens I've heard of seem more interested in evil pastimes, such as infiltrating world governments, dissecting livestock, and placing computer chips in the heads of abducted earthlings, after the obligatory horrifying medical exam on board the spacecraft, about which we will say no more out of respect for the more sensitive members of the studio audience.  Myself, I find reports of helpful aliens distinctly encouraging, and hope you won't think me self-serving if I just mention briefly that if there are any like-minded aliens visiting upstate New York soon, I could sure use a hand cleaning my gutters. 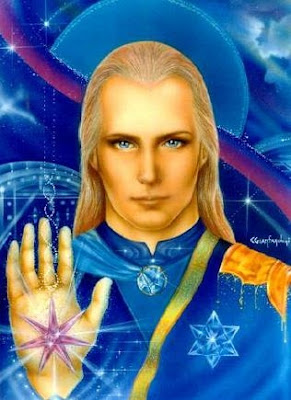 I found this image of a "Nordic Alien" on a website that cautions you against getting into a spaceship piloted by tall blond extraterrestrials, which honestly seems like good advice.  It also says that The Matrix was a coded message warning us about the dangers of being harvested by aliens.  The good news is that if you are approached, all you have to do is say, "I decline your offer to a contract," and they'll have no choice but to retreat in disarray.

Of course, my more scientific readers will be asking themselves why, exactly, is this spot a "zone of silence?"  Answers vary, as you might expect.  One explanation I've seen proffered is the presence of uranium ore in nearby mountains (because diffuse deposits of radioactive ores clearly attract aliens, cause small metal balls to fall from the sky, and interfere with radio signals).  Another is that this spot represents a "concentration of earth energies."  Whatever the fuck that means.  It is also claimed that there is an "astronomical observatory thousands of years old... a Mexican Stonehenge" in the area.   Well, that's enough for me!  Uranium ore + "concentration of earth energies" + anything that can be compared to Stonehenge = some serious shit!  ISNOT is on it!  Mobilize the troops!

Well, not really.  Sadly, we're not able to mobilize in this direction at the present time.  The disappointing fact is that given the current state of affairs in northern Mexico, it's not all that appealing to go down and visit the place.  I mean, tall blond aliens with yellow rain slickers are one thing; dodging bullets from members of mutually hostile drug cartels is quite another.  I think the field work will have to wait until things calm down a little.

Until then, however, keep your eyes open for any other Non-Objective phenomena that may pop up -- we have three highly trained professionals here at ISNOT who are ready to investigate.  I'll post further research notes here.  You'll be the first to know.
Posted by Gordon Bonnet at 4:26 AM