The strange case of the glow-in-the-dark pterodactyl

In the past week, I've written about a few cases for which an application of the sharp edge of Ockham's Razor would be advisable -- such as claiming that clouds are produced by UFOs as camouflage, deciding that the common perception of having less time to do stuff is because time itself is actually speeding up, and warning people about the pleasures and possible hazards of "astral sex."

There should be a name for the opposite of Ockham's Razor, shouldn't there?  Taking the available evidence, giving it careful consideration, and then running right off the cliff with it -- coming up with the weirdest, most convoluted, most difficult-to-swallow explanation you can.

Take the recent case of the the strange observations of a flying creature reported by a woman in Pennsylvania.  She states that she saw a "strange glowing thing at night" that flew over her car while she was driving.   It was "quite large," she said, and "was not too terribly high off the ground;" and "(it) seemed to be lit, or glowing."

Okay, that's the evidence; one woman's claim of a strange sighting. From this, what hypotheses can we devise?
Now, the story that I read told little more than the bits and pieces I've quoted, and I very much got the impression that that was all there was to it -- she had no evidence, no photographs, not even a sketch of what she saw.  Just a report of a flying creature that was glowing.  I'm the first to admit that I have no particular reason to conclude that she was lying -- I don't know her, and have no desire to impugn the motives of a total stranger.  But take our four hypotheses, and you rank them for plausibility.  I ask even the wooiest woo-woo out there in the studio audience; don't you think it's more likely that she saw a barn owl, or made the whole thing up, than...  Oh, come on.  Really?  A bioluminescent pterodactyl? 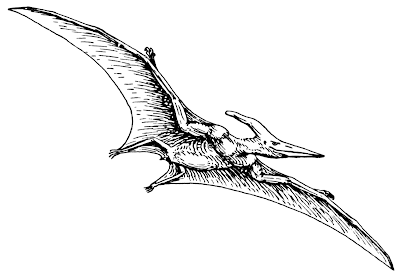 On second thought, there is a name for the opposite of Ockham's Razor; it's called confirmation bias -- the acceptance of minuscule pieces of evidence to support a theory you already had decided was true.  It's why believers in astrology will crow about the one newspaper horoscope a year that happens to be reasonably accurate, and ignore all the ones that aren't; it's why the religious will proclaim it a miracle when the ill person they prayed for got better, and ignore all the people who were prayed for and died in horrible agony.  Maybe at this point I should tell you the website the glowing pterodactyl story appeared on.

Yup, there's an entire website devoted to the idea that pteranodons and other pterodactyloids have survived through the millions of years since the last fossil evidence, conveniently leaving not a trace behind in all of the geologic strata from the intervening eras, and now are gliding their way over the wilds of Pennsylvania.  A lot of the evidence, if you can call it that, comes from native legends, just as the totality of the "evidence" for Mokele-Mbembe and the Bunyip being dinosaur survivals comes from tales from the natives of central Africa and Australia, respectively.  The pterodactyl legend is apparently especially to be found in Papua New Guinea, where a flying creature called the "Ropen" supposedly haunts the rain forest; but there's the "Wawanar" of western Australia and the "Kongamato" of Africa, and also an unnamed sighting in Cuba where it presumably was called the "holy mother of god what the fuck is that thing?", only in Spanish.

Did these people actually see something strange?  Could be.  There are plenty of big birds around; in the tropics, we also have fruit bats, one group of which (the "flying foxes" of the genus Pteropus) can have a wingspan of five feet.  Could they have been lying?  Drunk?  Crazy?  Sure.  Could it just be a story, and no more true than tales of unicorns and dragons?  Sure.  And I think any of those is more likely than it being a pterodactyl.

Now, don't mistake me; no one would think it was cooler than I would if it turned out that some kind of pterodactyloid actually had survived all these years.  In fact, the pterodactyloids are somewhere in my top five favorite categories of extinct animal.  I'm also fully aware of the times that it's turned out that something has made it to the present day, after years of only being known from the fossil record.   (The most famous being the coelacanth, the prehistoric lobe-finned fish that turned out not to be so prehistoric after all.)  I just don't think that it's all that likely that somehow a giant bioluminescent pterodactyl is gliding around in the woods of Pennsylvania, and has escaped all notice of the biologists until now.  It's slightly more likely that one could live in the forests of Papua New Guinea, or central Africa, given the remoteness, dense woods, and low population density; but only slightly.  The likelihood of it being a tall tale is orders of magnitude greater.

So, sorry to be a party-pooper, but I really do think that the lady in Pennsylvania saw a barn owl.  Or else should be more careful to take her medication regularly.  Whatever it was she saw, I'd be willing to bet a significant amount of money that it wasn't a glow-in-the-dark pterodactyl.
Posted by Gordon Bonnet at 4:33 AM