A Senegalese saying goes, "There are forty different kinds of lunacy, but only one kind of common sense."

I got an object lesson in this principle from a link sent to me by a friend and loyal reader of Skeptophilia a few days ago, wherein I learned that two rival zombie apocalypse cults are currently embroiled in a feud.  The article, by Robyn Pennacchia over at Wonkette, is well worth reading in its entirety.  But my ears perked up instantly when I found out that one of the feuders is one Sherry Shriner.  I knew I'd seen her name before, but where?

A brief search was enough to determine why my memory was jogged.  Back in 2014, I did a post about how the Evil Shadow Government is outfitting us all with microchips in our dental fillings and implanted medical devices, not to mention through vaccination, with the ultimate aim of controlling our behavior in much the same fashion as a ten-year-old uses the remote control to steer his plastic car directly into a wall.

Fortunately, Shriner is one smart cookie, and found out a way to neutralize the chips, something so unexpected and technical and sophisticated there's no way the Evil Scientists would ever have thought of it: magnets. Apparently the chips kind of conk out when they're placed in a magnetic field.  So they turn out to be not such a threat after all, especially if you've ever had an MRI, which must cause the chips to short-circuit so badly that it causes Bad Guy Scientific Laboratories the world over to go up in flames.

But the failure of Shriner's microchip-implant claim apparently didn't discourage her in the least.  She is still around, and has come into the news lately through her alleged connection to a crime you might have heard about -- a woman in Tobyhanna, Pennsylvania shot and killed her boyfriend, supposedly when he asked her to because he'd found out that the leader of the cult they belonged to was a "reptilian alien."

Because that makes total sense.

Anyhow, the leader of the cult, and alleged reptilian alien, is none other than Shriner herself.  Apparently Shriner tried to warn Steven Mineo, the victim of the shooting, that his girlfriend (Barbara Rogers) was a loon.  Not in so many words, of course; what Shriner said was that Rogers was a "Super Soldier."  From Shriner's Facebook page:


They're trying to spin it that I'm responsible for Steve's death?  No, Barb is.  I tried to protect Steve.  I tried to warn him about Barbara Rogers, but he wouldn't listen to me.  He thought I was insulting his 'wife'... when I was just trying to protect him from her!  I knew what she was!  He began to realize that what I said about her was true, and that's why she killed him, to protect her lies and keep her secrets.  They want to call me a cult leader?  No, I am just a humble servant and a Messenger of the Most High.  I spent my life serving HIM, and for that I get beat up by Cain's kids, libtards, Satanists, witches, and haters everywhere.  If you open your eyes it's clear to see she was involved with witchcraft and Satanism.  Steve didn't want to believe it and now he's dead from her hands.  Steve wasn't suicidal, it was her plan all along to destroy him.  So all the lies and garbage against me and others just needs to stop...

I warned him she was a Super Soldier who would kill him and move on... but I'm the 'False Prophet'...  Perhaps he finally figured her out but it was too late for him.  It wasn't the 'online cult' that killed him, it was Barbara Rogers who they had all warned him about!  They always try to paint me as a cult... nice try libtards.

So yeah, that sounds like the pinnacle of rationality.  The picture becomes even more vivid when you add to that the fact that Pennacchia found out that Shriner also thinks she's Lucifer's sister, and that she's personally interviewed her brother (and in fact wrote a book about it, one review of which begins with the memorable line, "This woman is a delusional loon.").  Oh, and she also sells crystals called "Orgone Blasters," which supposedly will destroy chemtrails, and which are (this is a direct quote from her website) "the only thing that works against Alien-Demonic-Zombie-Vampire beings."

In case those are a problem in your neighborhood. 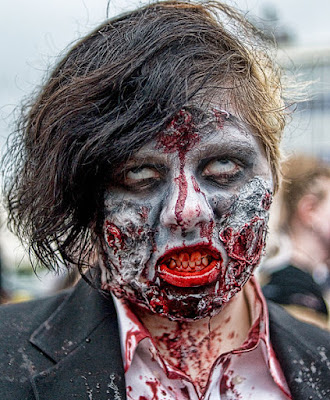 [image courtesy of photographer Bob Jagendorf and the Wikimedia Commons]

Interestingly, Shriner's "Orgone Blasters" are something I've also addressed here at Skeptophilia.  "Orgone," if you're curious, is a fantastically powerful kind of energy that is the force of "psychosexual release" that happens at orgasm.  How on earth you could use such an energy even if it exists is kind of a mystery, because when most folks have an orgasm they're thinking about other things than how to combat Alien-Demonic-Zombie-Vampire beings.

Or maybe that's just me.  I dunno.

You'd think that'd be enough to think about for today, but in the words of the infomercial: "Wait!  There's more!"  Shriner is currently engaged in a feud with another zombie apocalypse cult, which is called either "Amightywind" or "Almightywind" (even the cult itself seems to be unsure which is correct).  The leaders of this cult, Ezra and Elizabeth Elijah Nikomia, have come up with something even better than Shriner's use of magnets to defeat implanted microchips; they say you can defeat zombies by hitting them with a board:


I tell you this now so when you see these things come to pass you will not fear his army of ZOMBIES that will be slain by the POWER OF THE CROSS of YAHUSHUA ha MASHIACH!  Remember hit them with a board or wood that represents the CROSS.  The dead in YAHUSHUA (Christ) which shall walk and witness to MY Glory will walk as in times of old and testify of Heaven, not to take the MARK of the BEAST!  They shall prove there is life after death.  MY saints you will hear and see in Glorified Bodies that CAN NOT BE KILLED!

So anyhow, Shriner absolutely hates A(l)mightywind, almost as much as she hates "libtards."  Alleged boyfriend-killer Barbara Rogers, Shriner says, was an evil witch affiliated with the Nikomias' group, and there's been a years-long war between their rival cults of an intensity reminiscent of the Hatfields and McCoys:


So all the witches online seem to be rallying their covens and fake Christian ministries to protect fellow witch Barbara Rogers and come against me and paint the lie Steve wanted to die.  Almightywind Witch Cult is run by a woman who was a witch in the Great White Brotherhood of Indiana, broke off from them to begin her own “ministry’ online.  She’s been making hate videos about me for years.  Steve was well aware of them.

And apparently the idea is that the Nikomias talked Barbara into shooting Steve because Steve had allied himself with Sherry Shriner.  From here on it gets kind of confusing, however, so I'll simply direct you to Pennacchia's excellent article if you want more information.

Myself, I'm just glad that Shriner and the Nikomias all live in different states than I do.  I'm sure that New York has its share of wackos, but these three seem like they're in a class by themselves.  And the fact that they're feuding is honestly kind of scary, because when you have people whose grasp on sanity is so tenuous, you never know what they might do.

Or maybe I'm one of the Secret Reptilian Alien Zombie Vampire Libtards.  You can see how that would be just as likely.
Posted by Gordon Bonnet at 4:15 AM