A line in the sand

Richard Dawkins wrote, "I think it's important to realize that when two opposite points of view are expressed with equal intensity, the truth does not necessarily lie exactly halfway between them.  It is possible for one side to be simply wrong."

After yesterday's unhinged press conference, this is the situation we are in with respect to Donald Trump and his supporters.

The subject of his speech was the violence between white supremacists and protesters in Charlottesville, Virginia, in which a young woman was killed when an angry young man with neo-Nazi leanings drove his car into the crowd.  The violence, Trump said, was the fault of both sides:


What about the 'alt-left' that came charging at, as you say, the 'alt-right,' do they have any semblance of guilt?  What about the fact they came charging with clubs in hands, swinging clubs, do they have any problem?  I think they do...  You had a group on one side that was bad and you had a group on the other side that was also very violent. nobody wants to say it, but I will say it right now.

The "club in hands" reference is to a photograph of an Antifa member allegedly striking a police officer with a club -- a photograph that has since been shown to be digitally altered.

What is grimly ironic about this is that Trump defended the two-day delay in condemning the white supremacists and neo-Nazis by saying that he wasn't sure of his facts:


I wanted to make sure, unlike most politicians, that what I said was correct, not make a quick statement... What I said was a fine statement.  I don't want to go quickly and just make a statement for the sake of making a political statement.

Besides the fact that even after the delay, he still got the facts wrong, it bears mention that it took him only an hour to respond when Merck CEO Kenneth Frazier resigned in protest from the President's Manufacturing Council.  Trump's ego was stung by the resignation -- something which evidently moves him more than seeing people marching in Nazi regalia does.  "Now that Ken Frazier of Merck Pharma has resigned from President's Manufacturing Council," Trump sneered via Twitter (of course),  "he will have more time to LOWER RIPOFF DRUG PRICES!"

But apparently it takes way more time to decide whether to condemn white supremacists who had not only killed a young woman for protesting, but who had said, on a website affiliated with their cause, "Despite feigned outrage by the media, most people are glad [Heather Heyer] is dead, as she is the definition of uselessness.  A 32-year-old woman without children is a burden on society and has no value."

This is the ideology that our president thinks is so morally ambiguous that it took him 48 hours to decide whether it was worth condemning, and then afterwards claimed was actually no worse than the beliefs of the anti-Nazi protesters.

Most media were quick to condemn Trump's speech, but as soon as it hit the news, the apologists started in with equal speed.  Within a half-hour of the story breaking, I saw the following comments posted:
This last one is, of all of them, the one that galled me the most.  You know what?  Trump has had seven months of chances.  He has shown himself to be a dishonest, racist, misogynistic prick over and over.  The most surprising thing, in fact, is how unsurprising this last speech was.  It was totally in keeping with his prior words and actions.  All he did here is clarify his own ideology in such a way that there is no doubt any more where his loyalties lie.

So the chances are over, not only for Trump but for his followers.  It's no longer conservative versus liberal, Democrat versus Republican.  This is about deciding whether you side with a man who has allied himself with people who wear swastikas on armbands and chant, "The Jew will never replace us!"  There is no moral ambiguity here.  If you don't repudiate him, now, you are complicit in his actions and those of his followers. 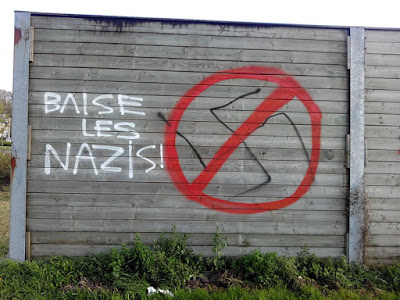 I try my hardest to listen to the people I disagree with, but at some point, there is no compromise, no way to find common ground.  After that, there is no choice but to commit to every effort necessary to stop people who are violent, amoral, and so convinced they are in the right that there is no possibility of discussion.

You might be saying, "Well, aren't you equally convinced that you're right?"  Perhaps.  But I'm not the one calling for violence against people of different races, religions, or sexual orientations.

This is the point where moral people have to stand up and take a hard look at what is happening here, and realize that neutrality is no longer an option.  We are fast approaching something very like the Weimar Republic of the 1930s -- waiting only for our own Reichstag Fire to plunge the nation into darkness and bloodshed.

So if you're a Trump supporter, I'm sorry if you were misled by his rhetoric.  I understand that it's easy to get swept away by the theatrics of politics, to vote for someone who turned out to be something other than you wanted.  But we've crossed a line, here.  If you still support him, if you are one of the ones crying out "give him a chance," then you and others like you are fully responsible for the horrifying place we seem to be headed.
Posted by Gordon Bonnet at 2:33 AM