Blinding me with science

Call me naïve, but on some level I still can't quite believe we've gotten to the point in the United States where our elected officials pride themselves on ignoring science.

The latest example of this kind of idiocy is the chief administrator of the Environmental Protection Agency, Scott Pruitt, who in my opinion was appointed to this position in order to give him the leverage to dismantle the EPA entirely.  That he hasn't done so yet -- although steps have been taken, in the form of cutting part of the staff and muzzling the remaining ones -- is more a testimony to the complete inability of this administration to accomplish anything, good or bad, than it is to a lack of will.

But Pruitt has made it mighty clear what his attitude is.  If there was any doubt of that, consider his statement last Thursday, given during an interview on a Texas radio program: "Science should not be something that’s just thrown about to try to dictate policy in Washington, D.C."

In other words: those damned ivory-tower scientists should keep their noses where they belong, in their electron microscopes and particle accelerators and reaction flasks, and stop trying to use what they know to accomplish anything practical.

I find this stance to be nothing short of baffling.  If we don't use science -- i.e., facts and evidence -- to drive policy, what the hell are we supposed to use?  Party affiliation?  Guesses?  The Farmer's Almanac?  Our daily horoscopes?

How have we gotten here, to the point that science is considered somehow disconnected from the real world?  Where people say, "If the scientists messing around in their labs say one thing, but the folksy musings of non-scientists say something else, I'm gonna believe the non-scientists?"  Part of it, I think, is the fault of us science teachers.  The fact that a governmental leader -- of the Environmental Protection Agency, for fuck's sake -- can say something like this and not be immediately laughed into an embarrassed silence is more of an indictment of our public school system than anything I can think of.  We've for years largely taught science as a list of disconnected facts and vocabulary words; no wonder that our students grow up to think of science as something weird, hard to pronounce, and not quite real.

But it's worse than that.  Our leaders, and pundits on television and talk radio, have trained us to disbelieve the facts themselves.  Never mind such incontrovertible hard evidence as the melting of the polar ice caps (just last week, a ship made it for the first time across the northern sea route from Norway to South Korea, without an icebreaker).  Never mind the thousands of pages of worldwide temperature data, the shifting of migration times for birds, the changes to the timing of flowering and leaf-out in northern deciduous forests, and even a recent study that in the northeastern United States, snowshoe hares are no longer growing in a white coat in the winter -- they're staying brown all year, because now that there's no reliable snow cover, being white in January is poor camouflage.

But none of those facts matter when compared to the ranting of people like Rush Limbaugh and Ann Coulter, not to mention Donald Trump and his proxy at the EPA, Scott Pruitt.  Ironically, Pruitt's statement, delivered last week in Texas, came as a category-4 hurricane was bearing down on the Texas coast, and has so far delivered an estimated 15 trillion gallons of water -- and it's not done yet.  It's being called a "500-year storm."

I'm trying to figure out how many storms in the past ten years have been labeled that way.  I've lost count.

And yet Ann Coulter is still discounting any possibility that this storm could be the result of anthropogenic climate change.  "I don't believe Hurricane Harvey is God's punishment for Houston electing a lesbian mayor," Coulter tweeted yesterday.  "But that is more credible than 'climate change.'"

Thanks for weighing in, Ms. Coulter.  I'll give your opinion serious consideration once I see your degree in climatology.

Or, for that matter, in any scientific field.

But that kind of har-de-har-har statement from a layperson is somehow given more weight than all of the academic papers, solid research, projections, and predictions -- than all of the actual facts -- generated by the smartest and best-trained people in the world. 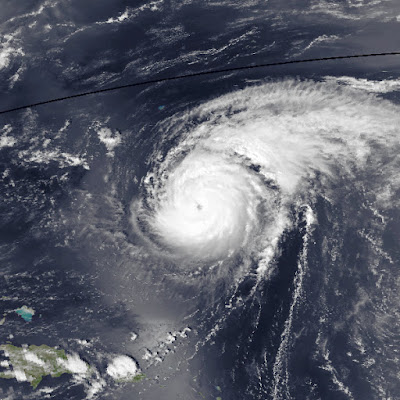 Hurricane Harvey prior to landfall [image courtesy of NASA]

As far as Scott Pruitt, he couldn't resist the opportunity to follow up his statement about how we shouldn't "throw science around" to generate policy with a dig at President Obama, who at least listened to scientists, even if he didn't always give them the attention they deserved.  "[Climate change] serves political ends," Pruitt said.  "The past administration used it as a wedge issue."

So in this topsy-turvy bizarro world we're in, to use facts, evidence, and science is creating a politicized "wedge issue," and to ignore them is the way to create sound policy.

The whole thing leaves me wanting to scream obscenities at my computer, which I actually did more than once while writing this.

Honestly, I think the only way this will change is if the American people wise up to the extent that all of these ignorant clowns get voted out of office, or if we're struck by an ecological catastrophe so immense that it becomes impossible to deny what's happening.  I'm not secretly hoping for the latter, by the way; but our track record of waking up to reality before serious damage is done is hardly encouraging.

For now, all we can do is watch and wait, and hope that the chickens come home to roost in the 2018 election.  But I'm not particularly optimistic about that, either.
Posted by Gordon Bonnet at 3:21 AM