As I mentioned earlier this week in my post about the "Majestic 12" conspiracy, once you've fallen down the rabbit hole of seeing conspiracies everywhere, there's no getting out.  Anyone who doesn't see the pattern is a dupe; anyone who tries to argue you out of believing it is a shill, or worse yet...

... one of the conspirators.

And the power of a conspiracy theory seems completely unrelated to its plausibility.  After all, we still have people believing that HAARP is creating hurricanes and tornadoes and blizzards and earthquakes, despite the fact that (1) it was shut down completely two years ago, (2) it never could do that stuff in the first place, and (3) if it could have done that stuff, there's no way in hell the government would have shut it down.

But logic doesn't stop people from yammering on as if what they were saying made sense.  Which is why a tweet a week ago about Outback Steak House having ties to the Illuminati has gone viral.

It all started with Twitter user @eatmyaesthetics, who noticed that if you mapped out the positions of five Outback Steak House in various cities, you could connect them with lines to form a pentagram -- a five-pointed star.  Of course, the emphasis here was on the sinister connotations of this symbol, especially when it's upside-down, which it was if you turned the map the right way. 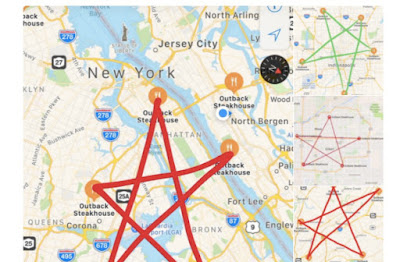 Then the retweet machine got started, and within short order the tweet had been reposted tens of thousands of times.  Undoubtedly some of the people who retweeted it did so because of the humor value, but some of them evidently believed that @eatmyaesthetics was on to something, because people started mapping out the positions Outback in their own cities, and lo and behold, found the same scary pattern.

Then Lauren Evans over at Jezebel threw her two cents' worth into the mix, saying, "Now that I know the truth, it's impossible to see it any other way.  And you don't get a ten-ounce steak for twelve dollars without at least a little help from the devil."

Which was tongue-in-cheek.  I think.

Then Outback itself got involved, first stating that that their official position was that they "neither would confirm nor deny" Illuminati involvement in their restaurants, following it up with a tweet that "If the Bloomin' Onion is evil, then we don't want to be good."  They added a winky-face emoji after the tweet, which could alternately be interpreted as "we're kidding, of course" or "we are an evil agency allied with the Forces of Darkness to engage in mind control via drugs sprinkled on your medium-rare ribeye steak."

All of which induced multiple orgasms in the conspiracy theory world.

But here's the thing, of course; what shape did they expect you'd get by connecting five dots with lines?  Here's an experiment I want you to run: get a sheet of paper, and draw five dots on it.  The only requirement is that no three of the dots can be in a straight line.  See if you can find a configuration of dots that you can't inscribe with a pentagram.

So this isn't so much a conspiracy theory as it is a test to detect who failed 10th-grade geometry.  In fact, any business that has more than five locations in a city can be connected with at least a reasonably recognizable pentagram.  So if Outback is an arm of the Illuminati, then so are McDonald's, Dairy Queen, and Taco Bell.

Although now that I come to think of it, I've been suspicious about Taco Bell myself for a while.

So as usual, we've got a case of what Michael Shermer calls "You can't miss it when I tell you what's there."  The upshot is that if you like Outback, you don't have to worry that part of the money you spend for dinner is going to support the New World Order.  Your biggest concern is that there have been people whose arteries have clogged up just looking at "Bloomin' Onions," but I doubt seriously whether that has anything to do with the Illuminati.
Posted by Gordon Bonnet at 4:52 AM