Linda vs. the serial killer

There's a logic problem that's often nicknamed "The Linda Problem," and I hasten to state that by calling it that I don't mean any general criticism of people named Linda.  It goes like this:


Linda is a 30-year-old woman who lives in a big city in the United States.  She is single, has a master's degree in sociology, and is deeply interested in issues of discrimination, social justice, and addressing poverty and homelessness.

Which of the following is more likely?


The whole thing rests on what is known as the conjunction fallacy, and it's amazing how many smart people this one trips up.  The answer is that the first statement has to be more likely; the more qualifiers you add to a list, the fewer people will meet the whole list at the same time.  To give an illustration that is less likely to elicit a wrong answer, consider the following.


You see a dog.  Which is more likely?


For this one, it's clear that each additional qualifier makes the pool of (in this case) dogs that fit the description smaller and smaller. 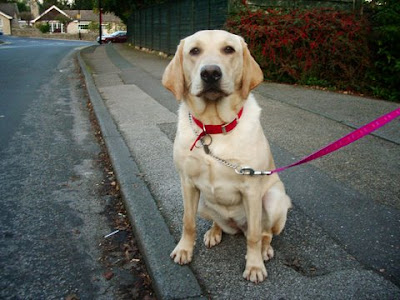 [image courtesy of photographer Eric Armitage and the Wikimedia Commons]

So why does the Linda Problem trip people up?  It's because in statement #2, the second qualifier -- that she voted Democrat in the last election -- is actually quite probable, given what we know about her.  Once people see that, they tend to grab on to it and ignore the bank teller part, thinking, "Well, I have no idea how likely it is she's a bank teller; but it's really likely she voted for Clinton.  So the second one must be the most likely overall."

Which is why I found the results of a paper that appeared last week in Nature: Human Behavior simultaneously so funny and so appalling.  The study, conducted by a team led by Will Gervais of the University of Kentucky, investigated biases against people based on their religious adherence (or lack thereof).  Test subjects were asked one of two versions of a question designed to see if people connected atheism with sociopathy.  They were given the following scenario:


A 45-year-old man, who tortured animals when he was young, later moved on to hurting people.  He has killed five homeless people that he abducted from poor neighborhoods in his home city.  Their dismembered bodies are currently buried in his basement.

Half of the test subjects were then asked the following:


Which of the following is more probable?


The other half got a different question:


Which of the following is more probable?


Well, you can see that this is just the Linda Problem in a different guise, and that in each case statement #1 is more probable, regardless of the qualifier (or what the additional qualifier was in statement #2).  But Gervais found a surprising result -- a full 60% said that in the first case, the second statement was more likely, and only 30% said the same for the second scenario.  (For comparison purposes, one study found that the average number of people who miss ordinary conjunction-fallacy problems is around 48%.)

Most interesting of all, people who were themselves non-believers were less biased -- but not by much.  (52% of self-described atheists got the first question wrong, as compared to 60% average for the entire group of test subjects.)

As fascinating as this is, it's also pretty disheartening.  I know there's prejudice against atheists, but really... a serial killer?  And even my fellow atheists have that perception?  I do run into this kind of thing, usually in the guise questions like, "If you don't believe in god, how do you have any moral compass?  Why don't you go around committing immoral acts?"  My response usually is something like, "If your fear of punishment in the afterlife is the only thing that's keeping you from lying, stealing, and hurting others, then you're the one whose moral compass needs examination, not mine."

But I didn't realize how deep the bias goes.  Gervais et al. write:


The results contrast with recent polls that do not find self-reported moral prejudice against atheists in highly secular countries, and imply that the recent rise in secularism in Western countries has not overwritten intuitive anti-atheist prejudice.  Entrenched moral suspicion of atheists suggests that religion’s powerful influence on moral judgements persists, even among non-believers in secular societies.

Which is kind of terrible, really.  Any kind of unfounded prejudice is a bad thing, but judgments like this lead people to make some pretty hideous assumptions.  It'd be nice if the Gervais et al. paper might get people to reconsider their biases, but given the words the authors use -- "intuitive" and "entrenched moral suspicion" -- that's probably a forlorn hope.

In any case, I hasten to reassure readers of Skeptophilia that I have no dismembered bodies buried in my basement.

For one thing, my basement has a cement floor, which would make it kind of difficult.
Posted by Gordon Bonnet at 3:41 AM