Even when I have gotten enough sleep, which isn't honestly that often, I have a distinct pattern in my energy level.  I tend to be an early riser, and after a barely-coherent half-hour or so in which I make coffee and answer anyone who talks to me in snarly monosyllabic grunts, I have a period of three hours or so during which I'm usually quite productive.  After lunch, there's about two to three hours of slump, when my chief concern is finding a nice quiet corner to curl up and take a nap.  (This doesn't help my 9th period class much, but they're big kids.  They can deal.) 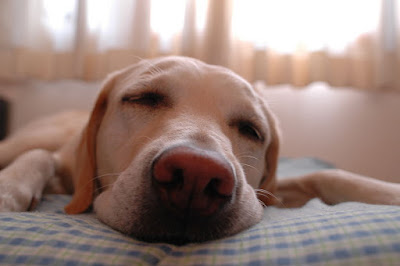 Late afternoon is usually pretty high energy, but after dinner I fade steadily.  By nine o'clock I'm ready to be reading a book in preparation for powering down for the night.  The times I'm up after ten are rare indeed.

I've always been a little curious as to why this is, as it seems to have little to do with external circumstances.  One of those odd circadian rhythms, but what purpose it could serve, I have no idea.

But now a recent piece of research has found a fascinating correlation to this pattern, one that involves the "neural reward center" of the brain, located in the putamen (interestingly, this same part of the brain is involved in several disparate functions, such as motor coordination, category learning, and our perceptions of hatred and disgust).

The current study, entitled "Time of Day Differences in Neural Reward Functioning in Healthy Young Men," was co-authored by Jamie E. M. Byrne, Matthew E. Hughes, Susan L. Rossell, Sheri L. Johnson, and Greg Murray, of Swinburne University (Australia), and appeared this week in The Journal of Neuroscience.  The researchers looked at the degree of activation in the left putamen -- the aforementioned neural reward center -- in sixteen healthy male test subjects, and found out that the peak not only in activity, but the subjects' self-reported feelings of well-being, peaked in the early afternoon.


Reward function appears to be modulated by the circadian system, but little is known about the neural basis of this interaction.  Previous research suggests that the neural reward response may be different in the afternoon; however the direction of this effect is contentious.  Reward response may follow the diurnal rhythm in self-reported positive affect, peaking in the early afternoon.  An alternative is that daily reward response represents a type of prediction error, with neural reward activation relatively high at times of day when rewards are unexpected (i.e., early and late in the day).  The present study measured neural reward activation in the context of a validated reward task at 10.00h, 14.00h, and 19.00h in healthy human males...  Consistent with the ‘prediction error’ hypothesis, activation was significantly higher at 10.00h and 19.00h compared to 14.00h.  It is provisionally concluded that the putamen may be particularly important in endogenous priming of reward motivation at different times of day, with the pattern of activation consistent with circadian-modulated reward expectancies in neural pathways; viz., greater activation to reward stimuli at unexpected times of day.

Put more simply, our reward centers react more strongly in the early morning and late afternoon because they're kind of surprised when things at those times don't suck.

Which makes me wonder about my own peculiar circadian rhythm.  I know that early-morning types like myself are in the minority, and my perkiness (at least once I've had coffee) at seven AM inspires near-homicidal rage in the typical morning-hater.  Also, I tend to be getting glassy-eyed at the point in the evening when most people are just getting the festivities rolling.

So would I show the opposite pattern in my left putamen than the test subjects in the Byrne et al. study?  Because I definitely wouldn't say my feelings of "positive affect" peak in the early afternoon.  The only thing that peaks around that time is my need for a nice long nap in the hammock.

Or, maybe, I am more productive during the morning and late afternoon because that's when I get the best payback from my reward centers.  In the early afternoon, perhaps my brain says, "Okay, if I'm not gonna get any props for working hard, why bother?  If I'm not appreciated, then screw it, I'm putting my feet up."

I'd love to volunteer for an fMRI and see what's going on in there -- whether my response is explainable from the pattern that Byrne et al. noticed, or if I'm just an aberration.

Be that as it may, the study is pretty cool from the standpoint of demonstrating a neurological underpinning to our behavioral circadian rhythms.  Any lens we can get on the workings of our brains is all to the good.  But I'm gonna wind this up, because my early-morning window of opportunity is wearing on, and I'm pretty sure I'm going to accomplish bugger-all after that.
Posted by Gordon Bonnet at 3:02 AM