A friend and long-time faithful reader of Skeptophilia sent me a link a few days ago to a webpage entitled, "Expert Says Humans Are Aliens -- and We Were Brought to Earth Hundreds of Thousands of Years Ago."

Now, I hasten to state for the record that this friend didn't send me this because she believes it; she clearly sent me this so I would do a faceplant on my desk so hard that it would leave a comical impression of my computer keyboard on my forehead for the rest of the day.  But I have to admit it starts out with a good question, to wit: "What if Humans are the aliens we've been looking for all along?"

To which I would answer: "What if C-A-T spelled 'dog'?"  Even if you were to entertain seriously the possibility that the ancestors of today's humans were dropped off here from another planet, which I am not for a moment suggesting you should, there's the pesky little problem of human DNA showing 70-80% homology with that of other mammal species, presuming of course that those species didn't come from other planets, too.

I mean, I'm a little suspicious about platypuses, myself, because it's hard to imagine how evolution would produce something so completely ridiculous looking.  It's not so hard to believe that aliens deposited platypuses in Australia as some kind of bizarre prank, and we humans just haven't gotten the joke yet.

So we're off to a rocky start, but it gets worse.  The author goes on to describe how the development of written communication is an indication that we're different from other species, and the only possible reason for this is that we're aliens.  But the problem is that you can do this with damn near any species on Earth.  For example: the archer fish of Southeast Asia has evolved the ability to spit water at insects on overhanging leaves and branches, to knock them into the water, whereupon the archer fish has dinner.  To my knowledge, no other animal can do this.

Does this mean the archer fish is also an alien?

Argument #2 goes something like, "Humans can't be evolved from other terrestrial life forms, because if you took a typical human and put him/her in the jungle, in short order (s)he would become jaguar chow, if (s)he didn't starve to death first."  But again, consider other earthly species; of course if you stick some unlucky individual into an environment that's hostile, or radically different from where it evolved, it's gonna die.  I'm guessing if you took a spider monkey and put it on the coast of Greenland, you would very quickly have a monkeysicle.  But that doesn't mean that monkeys aren't from the Planet Earth; it just means they're not from Greenland.

Oh, and then there's the argument that since we can't look at the sun directly without hurting our eyes, we must be from a planet where the sun is dimmer, or it's cloudy all the time. 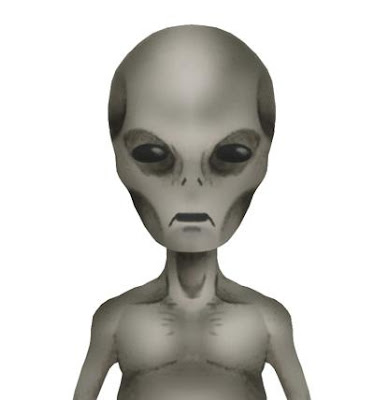 A photograph of my Cousin Fred, taken at last year's family reunion on the planet Gzork.  I told him to smile, but this is the best he could do.  [image courtesy of the Wikimedia Commons]

Then the "expert" gets on board, in the person of Dr. Ellis Silver, who has written a book called Humans Are Not From Earth: A Scientific Evaluation of the Evidence.  The first thing I did was to look up Dr. Silver's book on Amazon, and I found it had received 115 reviews, which follow the usual horseshoe-shaped distribution typical of wacko ideas; lots of 5s, lots of 1s, and not a hell of a lot in between.  In other words, either you're a true believer or a doubter right from the outset, and the book itself didn't make any difference to either group.  Here is a sampler of the reviews:

So not exactly ringing endorsements.  The author then goes on to cite a different "expert," one Robert Sepehr, who has written his own book (of course), this one called Species With Amnesia: Our Forbidden History.  So of course I had to check that one out.  The basic idea here is apparently that the Rh-negative blood type allele is weird, therefore we have to be the descendants of technologically advanced aliens who have forgotten where we came from and are now in the process of reinventing everything our ancestors knew.  Which, I think we can all agree, is what lawyers call an "air-tight argument."

Only one review for Sepehr's book stood out:
So there's that.

On the other hand, my mother was Rh-negative, meaning she has not just one, but two Rh-negative alleles, so she's alien on both sides of her family.

Which, now that I think about it, explains a great deal about my mother's relatives.

In any case, the whole thing seems to be a non-starter, which is kind of a shame.  I'd love nothing better than to discover that I'm an alien, especially if it meant that at some point my extraterrestrial cousins would whoosh down on their hyper-light-speed spaceship and pick me up to return to our home world, light years away from Donald Trump.  But I suppose that's too much to hope for, even if I do have at least some Rh-negative alien DNA.
Posted by Gordon Bonnet at 4:02 AM