Refusing to play by the rules

As a fiction writer, I'm frequently asked where I get the ideas for my stories.  I sometimes respond, "Being dropped on your head as an infant will do that to you," but the truth is, I have no idea.  A few of them have a clear moment of origin (such as my novel Gears, the plot for which first came to me when I read a paper on the Antikythera Mechanism).

For most of them, however, the genesis is not so clear.  I've had stories that came from a single powerful image that begs explanation, such as my short story "The Hourglass," which resulted from a vivid mental image of two young men, ostensibly strangers to each other, having a peculiar conversation over pints of Guinness at a dimly-lit bar.  I then had to figure out what they were talking about, and why... and what it all meant.

A lot of my ideas pop into my head at unexpected moments, when my mind and/or body is otherwise occupied.  I've had plot lines (or solutions to plot problems) suddenly appear while showering, while on a run, while mowing the lawn, while trying to get to sleep (the latter is especially annoying, because it necessitates my getting up and writing it down, lest I forget what I'd come up with).

In any case, most of the time, the origins of my own creative expression are as mystifying to me as they are to my readers.  So the most honest answer to the question "Where do you get your ideas?" is "I simply don't know."  But a recent bit of research has elucidated at least a piece of the origin of creativity.

Apparently, you become more creative when your rational thought processes are suppressed. 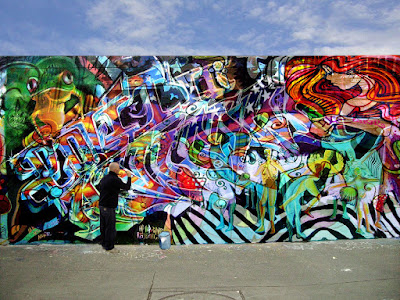 The study, by Caroline Di Bernardi Luft, Ioanna Zioga, Michael J. Banissy, and Joydeep Bhattacharya of the University of London, which appeared in Nature last month, is entitled "Relaxed Learning Constraints Through Cathodal IDCS on the Left Dorsolateral Prefrontal Cortex," and at first probably sounds like something that would only be of interest to serious neuroscience geeks.  Here's how the authors describe their own work:


We solve problems by applying previously learned rules.  The dorsolateral prefrontal cortex (DLPFC) plays a pivotal role in automating this process of rule induction.  Despite its usual efficiency, this process fails when we encounter new problems in which past experience leads to a mental rut.  Learned rules could therefore act as constraints which need to be removed in order to change the problem representation for producing the solution.  We investigated the possibility of suppressing the DLPFC by transcranial direct current stimulation (tDCS) to facilitate such representational change.  Participants solved matchstick arithmetic problems before and after receiving cathodal, anodal or sham tDCS to the left DLPFC.  Participants who received cathodal tDCS were more likely to solve the problems that require the maximal relaxation of previously learned constraints than the participants who received anodal or sham tDCS.  We conclude that cathodal tDCS over the left DLPFC might facilitate the relaxation of learned constraints, leading to a successful representational change.

In other words, if you suppress the part of the brain that understands and obeys the rules, you have more flexibility with regards to seeing solutions that require lateral, or "outside-of-the-box," thinking.

As an example of one of the problems the researchers gave their subjects that required lateral thinking, try out the following.

You're shown a (false) equation made of matchsticks that looks like this:

How can you make this a true statement with only moving one matchstick?

It turns out that there are two ways to do it, but both involve the expedient of adjusting not the numbers, but the equal or plus sign.  You could do this:

Or you could take any of the matchsticks and lay it across the equals sign to make an "is not equal to" sign -- one possibility of which is:

Both, of course, require a bit of creative thinking.  As Luft put it, "[Problems like this one] are very hard because in mathematics it is not a valid operation at all – we normally don’t decompose the plus sign, you see that as an entire entity."

It turns out that we become better at seeing these kinds of solutions when we are given transcranial direct current stimulation (tDCS) that temporarily suppresses the activity of the aforementioned left dorsolateral prefrontal cortex.  Nick Davis, a professor of psychology at Manchester Metropolitan University (and who was not involved in the research), found the study by Luft et al. to be fascinating.  "Creativity is highly prized in most areas of our lives, from work to leisure to politics and war," Davis said.  "When the [left dorsolateral prefrontal cortex] was ‘cooled down’, the brain seems to have stopped applying old rules, and been more successful at finding new rules – this is the essence of creativity in problem-solving."

All of which makes me wonder if the most creative people have less activity in the left DLPFC to begin with, at least intermittently.  And also, if so-called "mindless" activities -- such as running, showering, or mowing the lawn -- naturally slow down the left DLPFC, allowing creative ideas to bubble up unimpeded.

I'd love to see that researched... maybe it's a direction that Luft and her team could go.

From there, of course, the next step would be to find a way to switch the rational, rules-obeying brain module off and on at will.  I, for one, would love that, especially now, because I'm at a point in my work-in-progress where I've kind of painted myself into a corner.  I know I'll find my way out eventually -- I always seem to -- but while you're there, operating within what Luft et al. call "learned constraints" it's pretty damn frustrating.
Posted by Gordon Bonnet at 4:51 AM