Long-time readers of Skeptophilia may recall that a while back, I dealt with a type of energy called orgone.  Orgone, said psychologist Wilhelm Reich back in the 1930s, is a mysterious "life force energy" that causes the galaxies to turn, triggers weather phenomenon, maintains your health, and is the "psychosexual energy release" that occurs during orgasm.

Bet you didn't think all that stuff was happening when you have an orgasm.  I didn't, either.  I just thought it was kinda fun.

Be that as it may, there's only one problem with "orgone," and that's that it doesn't exist.  But as we've seen with countless other things -- homeopathy, Tarot cards, numerology, astrology, President Trump's moral compass -- zero evidence that the thing you're studying actually exists is not near enough to discourage some people.

Now, the problem with orgone is that being an invisible, unmeasurable, undetectable (yet universal) energy, it's also inherently unmarketable.  I mean, what are you gonna do?  Tell someone if they pay you $100, you'll go home an have an orgasm, and then funnel the "psychosexual energy" in their direction?  I'd like to think that there's no one who's that gullible, although the fact that there are people who were willing to pay hundreds of bucks for "medicines" that you download directly from your computer into your body, I'm not going to rule anything out.

But at least the people who are orgone-proponents have recognized the difficulty of trying to sell something like that, because they've come up with a new twist, which (not coincidentally) they can sell:

"Orgonite," allow me to explain, is solid orgone.  Or a solid that's been infused with orgone.  Or something.  It's kind of hard to tell, frankly, because most of the websites hawking the stuff sound like this:


Dr Wilhelm Reich, an Austrian psychiatrist, researched orgone energy (also known as chi or prana) in the earlier half of the 20th century, and today’s orgonite devices are built on his findings.  While conducting his research, Dr. Reich found that organic materials attract and hold orgone energy, while non-organic metals simultaneously attract and repel the energy.

Orgonite is based on these two principles.  It is a 50-50 mix of resin (organic, due to the fact that it is based on petrochemicals), and metal shavings (inorganic).  A quartz crystal is also added to the orgonite mix.  This is because of its piezoelectric properties, which means that it gives off a charge when it is put under pressure (resin shrinks when it is cured, so constant pressure is put on the quartz crystal).

Due to the fact that the elements contained in orgonite are constantly attracting and repelling energy, a “scrubbing” action takes place, and along with the charge that the crystal gives off, this cleans stagnant and negative energy, and brings it back to a healthy, vibrant state. 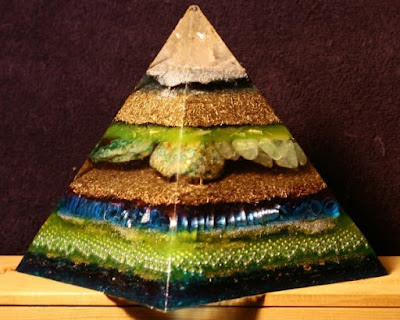 Well, needless to say the fact that this makes zero sense will not stop people from buying stuff like the "Fluorite and Onyx Orgone Cone" ($79.80), the "Crown Chakra Balance Orgone Pendant" ($46.55),  the "Balancing Lightworker Amethyst Orgone Pendant" ($35.90), and the "Boho Crystal Healing Festival Gypsy Orgone Spirit Jewel" ($99.75), the last-mentioned of which is clearly the most expensive because its name has more words.

Sad to say, all of this nonsense isn't going to do anything for you but lighten your pocketbook, and there's also the fact that a lot of what they're selling looks like the jewelry equivalent of Soap-on-a-Rope.  But maybe it's just that my chi is not balanced enough to appreciate how beautiful it is, I dunno.

Worst of all, this foolishness is now being peddled in other countries.  In fact, how I found out about it is that there is now an "orgonite network" in southern Africa, whereby lots of people are being told that in order to fix their health, all they have to do is buy colorful but expensive crap that comes along with a bunch of pseudoscientific babble.  Which, if you discount the placebo effect, is completely worthless. 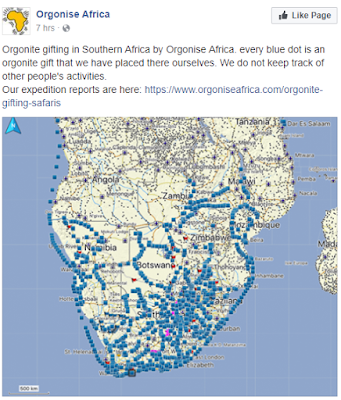 So anyhow, there you have it: yet another way to bilk money from the gullible.  There's no such thing as orgone, and therefore (by extension) "orgonite" is a bunch of bullshit, too.  My suggestion is not to worry about the whole negative energy scrubbing business.  I recommend actual orgasms over orgone any day of the week, even if the former doesn't realign your chakras.
Posted by Gordon Bonnet at 3:17 AM