So lonely I could die

I just got back from a ten-day visit to my publisher, wherein I attended a writers' retreat and about 150 different meetings with other writers and staff members of Oghma Creative Media.  This was great from the standpoint both of seeing some old friends, and also networking, which is pretty critical to a fiction author.

Simultaneously, however, it made me want to curl up into a ball and whimper softly.  I am dreadfully shy and a natural-born introvert, and crowds of people, however friendly, sap my energy like nothing else.  I did kind of crash-and-burn one day, during which I was in conversation with people from, no lie, 7:30 in the morning until 10:30 at night without a single break.

By the end, my publisher said I looked like a lost puppy, standing there with a dazed, "where am I?" expression on my face.  He did bring me a scotch, which helped considerably.

This is why I took such interest in a paper presented last week at the 125th Annual Convention of the American Psychological Association, entitled, "Loneliness: A Growing Public Health Threat."  The paper described a meta-analysis done by a team led by Julianne Holt-Lunstad, professor of psychology at Brigham Young University.  What they did was first combine the results of 148 different studies of over 300,000 people, correlating social isolation with the risk of early death, and then do the same for a larger group of 3.4 million people.

The results were unequivocal.  Social isolation correlates with premature death -- and in fact is as big a risk factor as obesity!  Holt-Lunstad said in her presentation:


Being connected to others socially is widely considered a fundamental human need — crucial to both well-being and survival.  Extreme examples show infants in custodial care who lack human contact fail to thrive and often die, and indeed, social isolation or solitary confinement has been used as a form of punishment.  Yet an increasing portion of the U.S. population now experiences isolation regularly... There is robust evidence that social isolation and loneliness significantly increase risk for premature mortality, and the magnitude of the risk exceeds that of many leading health indicators.  With an increasing aging population, the effect on public health is only anticipated to increase. Indeed, many nations around the world now suggest we are facing a ‘loneliness epidemic.’ The challenge we face now is what can be done about it.

Which of course got me thinking about my own situation.  I'm pretty solitary even for an introvert; I have lots of pleasant acquaintances, a few true and deep friends, but almost no social life.  The majority of the people in my life are there because of my (much more extroverted) wife, and even most of the people that I consider good friends I seldom see. 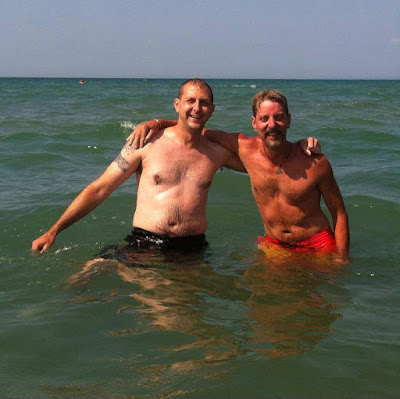 Me and one of my best friends, who unfortunately lives 230 miles away...

The problem, apparently, is worse in men than in women, probably because we guys have been told since birth that to be a strong man means to be tough, silent, and to downplay our emotions.  This comes at a cost -- for men, social isolation is as correlated with heart attack and stroke risk as smoking is, and in fact shows an actual biological marker -- an elevated level of fibrinogen, a protein involved in blood clotting.

Of course, correlation isn't causation.  It could be that the elevated risk and social isolation are correlated because both of them are caused by something else -- such as depression.  Establishing a causation was beyond the scope of this study, although it is to be hoped that the researchers will investigate that next.

The problem, both in general and for me personally, is what exactly socially isolated people are supposed to do about all this.  Heaven knows I'd like more social connections, and I suspect others like me feel the same way, but connections don't just magically appear.  They require us to put ourselves out there and be more outgoing.  Which gives me the heebie-jeebies.

Maybe a scotch would help.

Anyhow, forewarned is forearmed, and there's nothing to be lost by trying to forge a better social life for myself.  I doubt that I'll ever be extroverted no matter what I do -- but I have to say that a couple of buddies with whom I could have a beer every now and then would be mighty nice.
Posted by Gordon Bonnet at 3:37 AM