If you were wondering why the Trump administration has turned out to be a slow-moving train wreck, it's not because the American people saw fit to elect an unqualified, ignorant, narcissistic sociopath to the highest office in the land: it's because Trump et al. are being cursed by witches.

At least that's the contention of Lance Wallnau, pastor, author, speaker, "spiritual guide," and writer for Charisma News, who has been something of a frequent flier here at Skeptophilia.  Here are just a few of the appearances Wallnau has already made:
So you can see that Wallnau's grip on reality isn't that strong to begin with.  Despite the fact that he's one of these "traditional family values" guys who thinks that social liberalism is sending America into the pit of hell, he is staunchly behind a thrice-married serial adulterer for whom money and power are the sole motivators.  And, apparently, he sees no internal contradictions in this stance, to the point that he thinks that Trump is the next best thing to the Second Coming of Christ.

And now, Wallnau thinks that his Deputy Lord and Savior is under attack.  Because, let's face it; you can't be the Chosen One and expect that all the bad guys in the world are just going to accept it.  So Wallnau thinks that Trump is being cursed by witches, presumably using spells that make the target individual sound like a spoiled and inarticulate toddler.

But there's a twist in all this; since the president is being "protected by the prayers of Christians," most of the evil magic is being deflected, and is instead striking the members of Trump's family.  This could certainly explain some of the trouble that Donald Jr. and Jared Kushner are in at the moment.  And if some of the collateral damage is striking members of Trump's inner circle, this could also make sense of the resignation of Sean Spicer and Anthony Scaramucci, and the rumors surrounding some impending upset involving Attorney General Jeff Sessions.

I don't know how I feel about this.  I mean, taking down Donald Jr., Kushner, Spicer, Scaramucci, and Sessions is all very well, but it leaves so many other deserving recipients of evil spells uncursed.  I mean, come on; Kellyanne Conway?  Betsy DeVos?  Paul Ryan?  And most of all, Mitch McConnell?  If ever there was someone who needs to be targeted by the "Silencio" charm from Harry Potter, it's Mitch McConnell.  The only thing that would be better is to (1) make it permanent, and (2) add some other spell that would get rid of the slimy smirk he always wears. 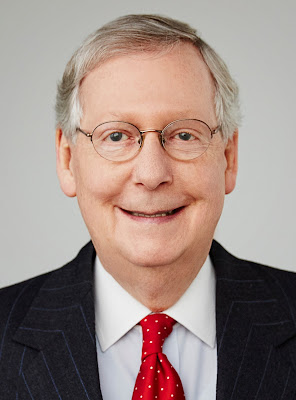 As proof of the danger, Wallnau cites an exorcism he once witnessed, wherein the demon was expelled from the possessed person, but instead of hauling ass back to the Pits of Darkness, the demon instead jumped into the body of the family dog, who proceeded to fling himself out of the car window as it sped down the highway.

Which brings up an important question, to wit: who the hell does an exorcism on someone in a moving car?  I'll admit that some people do drive as if they had taken classes in Hell's Driving School.  But even so, it seems like a dangerous thing to do.  Even if it wasn't the driver who was being exorcised, you'd still have the risk of sharp objects being flung around the car and the possessed person puking up pea soup all over the place.

Which would make it kind of hard to concentrate on watching the road.

But Wallnau apparently doesn't find anything at all weird about this.  He told his listeners exactly what they should say.  “We take authority over every hex, vex, spell, jinx, satanic curse, blood curse, every demon assigned to destroy the health of the president, to destroy the health of his family, to harass him, to vex him, to cause him to lose sleep.  In Jesus's name, we veto every curse that has been brought against Donald Trump and his family and his administration.”

And I have to admit that sounds pretty authoritative.  But you have to wonder why they don't do anything more productive, like praying that god vetoes Trump's Twitter account.

Anyhow, that's today's dip in the deep end of the pool.  I have to admit that Lance Wallnau is always good for a laugh, even if my chortling is tempered by the fact that he has a large number of people who actually listen to him and believe what he says, and damn near all of those people voted for Donald Trump.  All of which makes my laughter ring a little hollow.

So I think to cheer myself up I'll go practice hurling spells like "Petrificus Totalus" in Mitch McConnell's direction.  Who knows?  Maybe it'll work.  And if my aim is bad, it could still hit Paul Ryan, which would be almost as good.
Posted by Gordon Bonnet at 3:13 AM