Total eclipse of the brain

In ten days, people in the United States will get the best shot at seeing a total solar eclipse we've had in years.  The path of totality crosses the country diagonally from northwest to southeast, starting near the northern border of Oregon and ending in South Carolina. 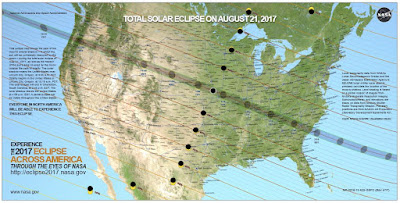 Astronomy buffs and people who simply like an unusual spectacle have been excited about this for ages.  Motels in towns within the path of totality sold out months ago, especially in places like the Midwest where you're more likely to have clear skies.

The buzz about the eclipse prompted the eminent astrophysicist Neil deGrasse Tyson to make the following observation: 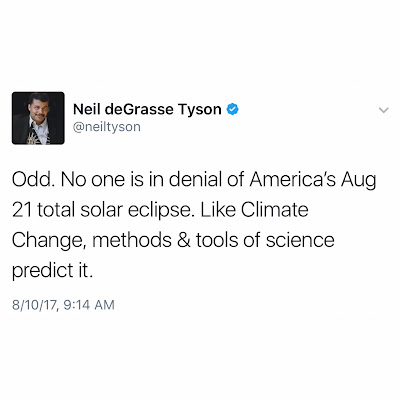 Well, far be it from me to argue with someone of NdGT's stature, but just because people aren't denying the eclipse doesn't mean that they're viewing it with any kind of scientific eye.  We're already having the wingnuts putting their unique spin on the event, and you should watch for this sort of thing to increase exponentially as we approach August 21.

Well, a zero batting average doesn't discourage people like Lotz in the least.  It's interesting that the elder Graham, although we don't agree on much, always impressed me as a thoughtful and deeply compassionate man.  His kids, though... son Franklin is a virulently anti-LGBT firebrand, who has a real talent for ugly invective.  And now, his daughter... well, let me give it to you in her own words:


The warning is triggered by the total solar eclipse of August 21, nicknamed America's Eclipse. For the first time in almost a hundred years, a total solar eclipse will be seen from coast to coast in our nation.  People are preparing to mark this significant event with viewing parties at exclusive prime sites.  The celebratory nature regarding the eclipse brings to my mind the Babylonian King Belshazzar who threw a drunken feast the night the Medes and Persians crept under the city gate.  Belshazzar wound up dead the next day, and the Babylonian empire was destroyed...  Therefore, my perspective on the upcoming phenomenon is not celebratory.  While no one can know for sure if judgment is coming on America, it does seem that God is signaling us about something.  Time will tell what that something is.

As far as I can tell, what god seems to be signaling is that if something is in front of the sun, it creates a shadow.  End of story.

But the religious fringe aren't the only ones who are jumping up and down making excited little squeaking noises about August 21.  We also have the crypto-woo-woos, who warn us that the eclipse is going to be noticed by more than just humans: 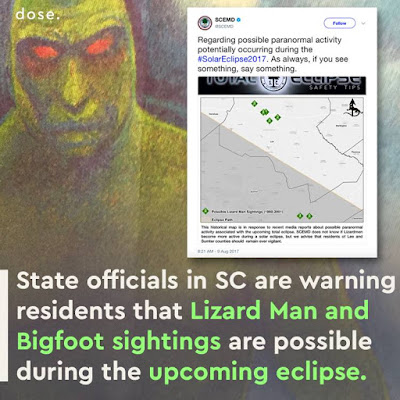 Long-time readers of Skeptophilia might recall that I warned South Carolina residents about Lizard Man way back in 2011.  As far as Bigfoot, you may be questioning how there could be Bigfoot sightings down there in the Southeast -- after all, the real Sasquatch hotspot is the Pacific Northwest.  But just yesterday, an alert reader sent me an article about a sighting of Bigfoot last week in North Carolina, so it's evident that the cryptids are on the way.  The fact that they're converging on the path of totality is a little peculiar, as solar eclipses have no particular precursors that might warn an animal that one is imminent, and I generally don't think of Bigfoot as being particularly knowledgeable about astronomy.

Unless it's that Bigfoot is psychic, and is sensing oscillations in the quantum frequency dimensions.  You can see how that could happen.

In any case, I'm understandably not inclined to share NdGT's optimistic assessment of Americans' attitude toward the solar eclipse.  As I've observed before, there is no finding so solidly scientific, so evidence-based, that the woo-woos can't woo all over it.

So if you're going to head over to the path of totality in ten days, keep your eyes open, and make sure you drop me a line here at Skeptophilia headquarters if you see any Bigfoots, Lizard Men, or Apocalyptic Horsepersons.  I'll be happy to post an update, especially if you can take photographs.  As is required with such photographs, however, make sure you have your camera's settings on "AutoBlur."
Posted by Gordon Bonnet at 3:14 AM