Following hard on the heels of yesterday's post about a guy who claims to have had an alien mistress, today we have: a cannonball on Mars proving that there was a war there back in the day.

The origin of this claim comes from one Scott Waring, who has been something of a frequent flier, here at Skeptophilia.  In fact, he's more or less become our resident specialist with regards to unhinged claims about Mars.  Among other things, Waring has claimed that the Mars lander has snapped pictures of:

So it's not to be wondered at that I view anything Waring dreams up with a bit of a wry eye.  But without further ado, let's take a look at his evidence: 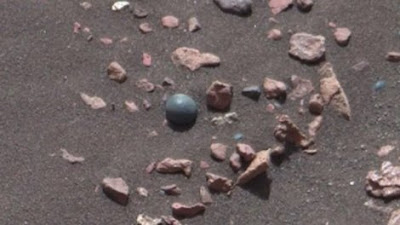 What this looks like to me is a concretion, which is a sedimentary rock formation in which concentric layers of a cementing material are laid down around some central core.  It can produce some weird-looking rocks; take a look, for example, at this photograph from Kazakhstan: 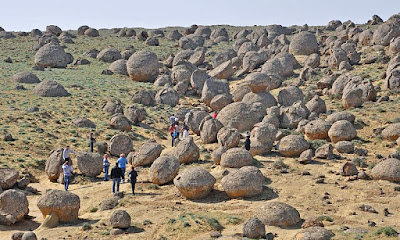 [image courtesy of photographer Alexandr Babkin and the Wikimedia Commons]

If I didn't know a bit of geology, I would certainly wonder about what the hell this could be, because it looks to my eye like Kazakhstan received a visit by the rare and elusive giant Martian bunny.  But no, these are just rocks.  Odd rocks, yes, but rocks.

Waring, however, doesn't see it that way.  The rock in the first picture is a cannonball.  And from this, he has concluded that there was a war on Mars millions of years ago, which resulted in two things:
Which strikes me as pretty bizarre.  How can he deduce all this from a single alleged cannonball?  Plus, if the warring factions on Mars possessed weapons sufficient to destroy the atmosphere, why the hell would they bother with cannons?  It'd be like Luke Skywalker et al. trying to defeat the Stormtroopers using slings, stones, and catapults.

But my feeling is still that Waring is batting zero.  A pity, really, because it would be so cool if the Mars lander had stumbled upon some evidence of Martian life.  On the other hand, maybe it's better that there are no Martian bunnies.  I have enough trouble keeping the ordinary terrestrial bunnies out of our vegetable garden as it is; it would suck if I had to worry about an invasion of alien bunnies.
Posted by Gordon Bonnet at 2:11 AM