Black-eyed Children and the power of the imagination

My current fiction project, with which I am about two-thirds done, is a trilogy about a group of people fighting the threat of the "Black-eyed Children."

What are Black-eyed Children, you might ask?  Other than the obvious?

This completely creepy urban legend apparently started in 1998, when journalist Brian Bethel posted a story on a newsgroup describing an encounter he'd allegedly had.  He was sitting in his car in a parking lot in Abilene, Texas, and he was approached by two unusually eloquent children who asked him to give them a ride.  He was about to unlock his door and let them in when he noticed that their eyes were black -- no iris, no whites, just solid, glossy, inky black.  He rolled his window up and gunned the motor, and the children became angry and insistent.   Fortunately for Bethel (he claims), he was able to drive away.

Since that time, there have been numerous other reports of Black-eyed Children.  They always attempt to get the unwary to let them into a car or house, often with pitiful stories ("I'm lost and I need to get home, my parents will be so worried").  In one case, from Mexico, a Black-eyed Child begged a man to carry him, saying, "My feet hurt so much, I can't walk, and if you don't carry me, I'll never get home."  No one seems to be quite sure what the children are trying to accomplish, and I was unable to find any reports from people who'd actually acquiesced to their demands.  Maybe anyone who does what the children ask is *cue scary music* never heard from again. 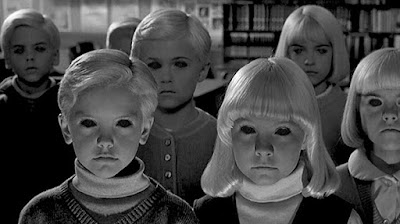 This urban legend/tale of the paranormal is chilling on a number of grounds.  First, it involves children, which somehow makes it scarier.  The combination of innocence and amorality that is commonplace in perfectly normal young children has made the idea of "evil children" fruitful ground for makers of horror movies (The Exorcist, The Omen, and The Bad Seed, to name just three).  That they would somehow try to accomplish their wicked ends by wheedling their way into your home or car is a pretty shiver-inducing idea.

Then, there's the thing about the eyes.  There's something special about eyes; it is telling, I think, that they're referred to as "the windows of the soul." Stephen King writes, in his masterful analysis of horror stories, Danse Macabre:


Our eyes are one of those vulnerable chinks in the armor, one of the places we can be had...  Like our other facial equipment, eyes are something we all have in common...  But to the best of my knowledge, no horror movie has ever been made about a nose out of control, and while there has never been a film called The Crawling Ear, there was one called The Crawling Eye.  We all understand that the eyes are the most vulnerable of our sensory organs, the most vulnerable of our facial accessories, and they are (ick!) soft.  Maybe that's the worst.

It's hard to know if Bethel made up the original Black-Eyed Children story, or whether he was the victim of a prank by some kids with black contact lenses (such things exist, as do slit-pupilled ones -- one of my students gave me a good scare with a pair of those, once).  Predictably, I don't believe that there really are creepy demon-children out there trying to get into people's cars.  But having their eyes be solid black certainly adds a nice little frisson to the story.

Last, I think this story is scarier for its subtlety.  When you think of the bare facts of the original tale, nothing really happened.  We are not told, and therefore are left free to imagine, what the intentions of the children were, what they'd have done to Bethel if they'd gotten into the car, and (most fundamentally) who they were.  And I don't know about you, but my imagination can come up with ghastlier explanations than anything real could possibly be.  I suspect it's even capable of exceeding the Scare Quotient of most plots from horror movies.  I'm always more frightened by what I don't see than I am by what I do -- for example,  I think that the scariest scene in The Sixth Sense is when the main character is locked in a closet by bullies, and all you hear is his gasps and screams, and thumping around -- and then silence.

Man, there could have been anything in that closet with him.

Of course, that didn't stop me from coming up with an explanation for what the Black-eyed Children are trying to accomplish for my novels.  But in order to find out what that is, you'll just have to wait until the first one in the trilogy (Lines of Sight) is published in Fall of 2018.

In any case, reports of Black-eyed Children have continued to circulate, ever since Bethel's first posting almost twenty years ago.  (Not recommended reading for night time, or when you're alone in the house...)  As you might expect, I'm not prepared to give these accounts any other explanation than human imagination and the love of a good scary tale, and possibly a well-executed prank or two.  But I have to admit that reading them does send a chill skittering its way up my spine -- just proving that even skeptics are not immune to creepy stories.
Posted by Gordon Bonnet at 2:32 AM