I've said it more than once; one of my dearest hopes is to live long enough to see unequivocal proof of the existence of extraterrestrial intelligence.  A lot of people share this desire, to judge by the popularity of shows like the various iterations of Star Trek, Battlestar Galactica, and Lost in Space, not to mention dozens of movies, of which Stargate, Contact, Close Encounters of the Third Kind, and 2001: A Space Odyssey stand out in my memory, the last-mentioned because it demonstrates the general principle that there is no idea so interesting that someone can't elaborate upon it in such a way as to make it catastrophically boring.

The fascination our species has with aliens also explains the fact that people keep seeing them.  As far as I've seen -- and I've read a lot of accounts of UFOs and so on -- they fall into two categories:

Sad to say, I've yet to see a claim that's convinced me, although I'd sure like to.  For me, though, it'd have to be pretty persuasive -- it's all too easy to be fooled.  But if an alien ship landed in my back yard, and three-eyed blue guys from the planet Gzork came out to shake my hand with their tentacles, I'd have no choice other than to believe.

Or, as in the case of David Huggins of Georgia, who is releasing a documentary (available for streaming) on December 12 in which he claims that he not only contacted aliens, he had sex with 'em. 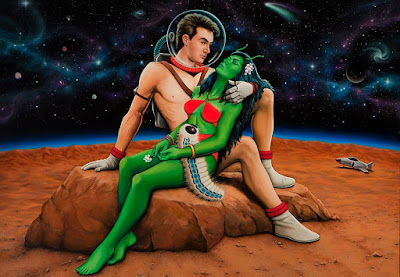 The documentary, which is titled (I shit you not) Love & Saucers, described his repeated liaisons with an alien named "Crescent," with whom he had sixty hybrid half-human, half-alien children.  Which makes me wonder: do these aliens have litters, like dogs?  Because if each child was the product of one (1) sex act and one (1) pregnancy, they either have a hell of a short gestation period or else they are really horny.  Huggins is now in his seventies, and he said his first time having sex with Crescent was when he was 17, so that is (give or take) fathering a child a year from ages 17 to seventy-something.

Which is a lot of hot human/alien whoopee.

Despite all of this, he had enough zip left to father a human son with his human wife, Janet, although the article does say that David and Janet Huggins are now divorced.  Understandable, considering the number of times he cheated on her with his extraterrestrial girlfriend.

And apparently Crescent didn't just pay him conjugal visits in his home, she also brought him back to her spaceship.  She forbade Huggins from telling anyone about their liaisons and their children.  The prohibition apparently didn't accomplish much, because not only has Huggins made a documentary, he's written a book, and done numerous paintings (most of them highly NSFW) of him fucking an alien.

Which to me is more than a little skeevy.

Be that as it may, I have my doubts about the story on a purely biological basis.  If there was a life form who had evolved on another planet, completely separated from Earth, there is no reason to expect they would be sexually compatible with humans, including having orifices and appendages of the right size and shape, if you get my drift.  Furthermore, even if alien life is DNA based -- which is possible, as DNA nucleotides are abiotically synthesizable under the right conditions -- it is extremely unlikely that it would be similar enough to ours that we could produce viable hybrids, given that most terrestrial species can't interbreed and produce offspring.

But maybe Crescent took care of all that in her spaceship's laboratory, I dunno.

So anyway, when the documentary is available next week, I highly recommend watching it, if for no other reason the humor value.  As far as Huggins's account, though, I'm not buying it.  My guess is that it's nothing more than a prurient imagination and desire for fame and attention.  Me, I'm hoping that if the aliens do land in my back yard, they won't be looking for love.  For one thing, I'm happily married, and my wife would disapprove.  For another, my kids are grown and living on their own, and the last thing I want at this stage in my life is to be changing the diapers of a half-alien, half-human baby.
Posted by Gordon Bonnet at 2:09 AM