By now, you've probably heard about Donald Trump's controversial decision to grant official recognition of Jerusalem as Israel's capital city, to be followed by moving the United States Embassy from Tel Aviv to Jerusalem.

The issue -- as far as I understand it -- is that both Israelis and Palestinians consider Jerusalem to be their capital, and our previous stance was that the US would remain out of that particular facet of the conflict.  The hope was that any eventual Israeli-Palestinian peace deal would involve some sort of compromise regarding the city (hard to imagine what that would be, of course).  So while we've been pretty unequivocally supportive of the Israelis, we've been cautiously neutral with regards to that piece of it.

Trump, of course, has the "bull in a china shop" approach to world diplomacy, and announced his decision last week, come what may.  This caused a lot of forehead-slapping on the part of people who've devoted their lives to bringing peace to the Middle East -- but one group, at least, was absolutely thrilled.

This, to no one's particular surprise, was the evangelical Christians, who in the last year have showed themselves as a group to be kind of unhinged.  And this time, one of their spokespersons in the political arena -- State Senator Doug Broxson of Florida -- has come right out and said why Trump's announcement was the cause of such jubilation:

It's going to usher in the End Times.

"Now, I don’t know about you," Broxson said to a cheering rally, "but when I heard about Jerusalem — where the King of Kings [applause] where our soon coming King is coming back to Jerusalem, it is because President Trump declared Jerusalem to be capital of Israel."

Of course, at the same rally, Broxson also called Trump's cabinet picks as "the best of the best, the brightest of the brightest," which makes me wonder if Broxson has either lost touch with reality in general, or else his only basis of comparison is the members of the Under-90-IQ Club.

Be that as it may, what gets me most about this statement is how excited the evangelicals seem to be about the Rivers Running Red With The Blood Of Unbelievers.  I mean, you'd think that even if you knew you were going to be on the winning side, you wouldn't be looking forward to it, you know?  As a friend of mine put it, "You're free to think I'm going to be condemned to burn in agony in hell for all eternity, but it'd be nice if you didn't seem so happy about it."

I suppose the reason is that the End Times cadre think that before the really bad stuff starts happening, they're all gonna be Raptured right the hell out of here, leaving us evil folks down on Earth to contend with such special offers as the Beast With Seven Heads and Ten Crowns.  Which brings up an interesting question: why does it have three more crowns than it has heads?  I remember that bothering me when I first read the Book of Revelation as a teenager.  Does it wear two crowns on three of its heads, and one each on the other four?  Or does it wear one crown per head and carry the other three around in its backpack as spares, in case one of its crowns is in the laundry?

Of course, in the same passage (Revelation 13:1) it also says that the Beast has ten horns.  As a biologist, I find that even more peculiar.  Usually the number of horns on an animal is a multiple of the number of heads.

But maybe I'm thinking too hard about all of this. 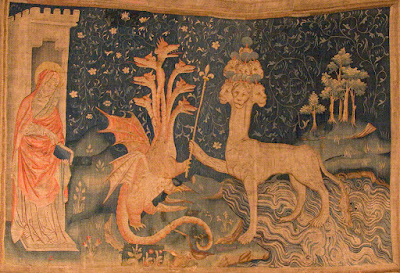 So I'm a little perplexed by the jubilation.  I thought that Jesus was pretty unequivocal about loving thy neighbor, and as far as I can see this does not entail looking forward to thy neighbor being the featured entrée at Satan's barbecue lunch.

As for me, I'm kind of hoping that Trump's decision doesn't usher in the End Times, and also that it doesn't cause the turmoil in the Middle East to intensify, because that's the last thing those people need.  Right now, it would be more to the point to try to defuse tensions, not do shit that makes the warring factions even madder at each other.

But I suppose that's what you get when the "best of the best and brightest of the brightest" are in charge.
Posted by Gordon Bonnet at 2:16 AM