Happy Xmas (War is Over)

Merry Christmas to all who celebrate from here at Skeptophilia headquarters.  As for my household, we're mostly just taking it easy.  Working in a school means the lead-up to Christmas can be kind of chaotic, and I have to say that I'm enjoying being able to sit here drinking a cup of coffee without people yelling my name at me every three seconds.  Plus, we're having a winter storm that's supposed to dump five inches of snow on us today, and comes with forty mile an hour winds (already there's a gale howling out there).  So I doubt seriously if I'll put my nose outside today.

Some of you might wonder why I, an atheist, am wishing a Merry Christmas to people.  The reason is: I am not an asshole.  I am honestly happy for people who enjoy the Christmas season, and that does not mean I'm somehow discriminating against those who don't.  Mostly, I want everyone to be happy and enjoy life, and am of the opinion that my being of the non-religious persuasion doesn't imply that I'm ill-wishing people who are believers.

This, of course, won't convince the perpetually-disgruntled types who think that someone saying "Happy holidays" is the moral equivalent of strafing Whoville.  And in fact these people have now started an ad campaign that has as its main message thanking Donald Trump for allowing us to say "Merry Christmas" again.

What I want to know is, what pretend world are these people living in?  Because, apparently, they honestly believe that President Obama outlawed saying "Merry Christmas."  My guess is that they believe he substituted a mandate that we all say "Allahu akbar" instead.  This is despite the existence of this video montage of Obama saying "Merry Christmas" over and over and over, with apparent enthusiasm and enjoyment.

But as has been demonstrated time and again, facts don't matter with these people.  Or, more to the point, you're allowed to make up the facts as you go.  Trump (and his eternally-angry pals Joe Walsh and Bill O'Reilly) have claimed for years that Obama and his family were not Christian and had general disdain for Christmas, despite the fact that the tradition of the White House Christmas Tree, the annual Christmas message, and Christmas cards went on during the eight years of Obama's presidency just as it did before and after. 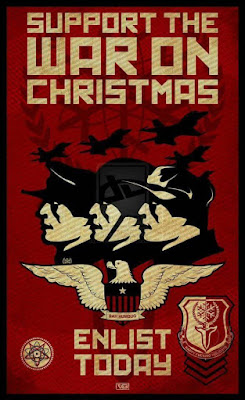 And, astonishingly, their followers believe them.  Instead of watching the video of Obama saying "Merry Christmas," and concluding they were wrong, they ignore the evidence that's right before their eyes so they don't have to change their preconceived opinions.  Instead, they accept statements like that made last week by Representative Louie Gohmert of Texas about the horrorshow that would have occurred had Hillary Clinton won:


If Hillary were elected and then she replaces [Antonin] Scalia with someone who has contempt for the God we know rules the universe, and our freedom of religion would have been gone.  They consider Christians a hate group, even though it’s the one true religion based on ‘God so loved the world he gave his son.  His son so loved the world he gave his life,’ and they have turned that upside down.  They were going to be coming after Christians with the help of then a 5-4 Supreme Court.

So on election night I said, ‘But if on the off-chance Hillary wins, sweetheart, you need to be ready.  They’ll probably have me in jail within four years,’ and I wasn’t kidding.  I really believed that if she had won, my freedom was at stake because of my Christian beliefs.

Okay, I know that Gohmert has the IQ of leftover mashed potatoes, but still.  On what basis could he possibly conclude that if Clinton had won, she would have had Christians jailed?  Because -- and it pains me to have to point this out -- Hillary Clinton is also a Christian.  Her membership in the Methodist church is well established.  Why on earth would she try to create a policy of oppressing a group that she herself belongs to?

Of course, we're not talking about logic, here.  But it still amazes me that anyone can listen to Louie Gohmert (or, frankly, Donald Trump) and just sit there nodding and saying, "Yeah, right on, that makes sense."  How do people's bullshitometers not peg?  When the little girl on the commercial says, "Thank you, President Trump, for allowing us to say, 'Merry Christmas" again," how do people not say, "What kind of horseshit is this?  The phrase 'Merry Christmas' starts appearing in stores in September.  What makes you think it was ever forbidden?"

But amazingly, they don't.

Anyhow.  Sorry for getting off on a rant, when probably what you want to be doing is opening presents and drinking eggnog and socializing with your family.  Didn't mean to put a damper on things.  And, honestly, I've found that people who continually take things the wrong way and seem to enjoy being outraged are the minority.  So to everyone else I'll say: Enjoy the day, whether you celebrate Christmas or not.  Even if you're not religious, "peace on Earth and good will toward everyone" is still a pretty good rule to live by, as is "don't be an asshole."
Posted by Gordon Bonnet at 2:51 AM