Some of my readers might know about the strange, mysterious humming noises that have been reported everywhere from Taos, New Mexico to Auckland, New Zealand.  The phenomenon has been reported in so many different locales that there's a Wikipedia page dedicated to it.

Explanations have varied, and to be fair, it's probable that the same cause doesn't account for all of the various hums in the world.  The Kokomo Hum and the West Seattle Hum were both adequately explained as low-frequency sound vibrations from machinery, the one in Kokomo from the Daimler-Chrysler plant, the one in West Seattle from a vacuum pump used by CalPortland to offload cargo from ships.

Some, though, are not so easily explained.  The Auckland Hum, which was pinpointed by people who heard it at 56 Hertz, and the Taos Hum, found to be between 32 and 80 Hertz, have never been adequately explained, leaving skeptics wondering if they might not be a combination of tinnitus and people paying such rapt attention to the silence that they begin to think they're hearing something.  Neither of those has ever been recorded or detected by sound equipment, despite the fact that any sound in that frequency range audible to human ears should be easy to detect.  (Especially given that one guy who has heard the Taos Hum said it was audible from 48 kilometers away.) 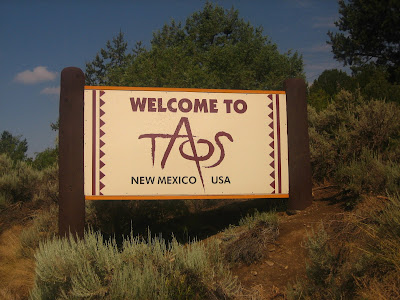 Now, however, we have some research indicating that at least some of the world's Hums are due to a fascinating, and little-understood, phenomenon; the movement of deep ocean waves across uneven parts of the abyssal seafloor producing compression waves (better known as "sound") that could, potentially, propagate a great distance relatively unimpeded.  The study, by Fabrice Ardhuin, Lucia Gualtieri, and Eléonore Stutzmann of the Laboratoire d'Océanographie Spatiale, in Brest, France studied short-period interactions between oceanic waves and the terrain across which they were passing.  The vibrations, called "microseismic activity," might generate a sound where the wave fronts meet the boundary between air and water, thus creating a humming noise.  The authors write:


Microseismic activity, recorded everywhere on Earth, is largely due to ocean waves. Recent progress has clearly identified sources of microseisms in the most energetic band, with periods from 3 to 10 s.  In contrast, the generation of longer-period microseisms has been strongly debated.  Two mechanisms have been proposed to explain seismic wave generation: a primary mechanism, by which ocean waves propagating over bottom slopes generate seismic waves, and a secondary mechanism which relies on the nonlinear interaction of ocean waves.  Here we show that the primary mechanism explains the average power, frequency distribution, and most of the variability in signals recorded by vertical seismometers, for seismic periods ranging from 13 to 300 s.  The secondary mechanism only explains seismic motions with periods shorter than 13 s.  Our results build on a quantitative numerical model that gives access to time-varying maps of seismic noise sources.

Whatever the source, the noises are ubiquitous.  As Columbia University seismologist Spahr Webb put it,  "The Earth is ringing like a bell all the time."

What is pretty certain, however, is that these phenomena are not the result of the archangels blowing the trumpets of the Apocalypse, as End Times loons have claimed.  As recently as last month, loud, horn-like sounds reported from Canada and Indonesia have been claimed to be signs of the imminent fulfillment of the prophecies of the Book of Revelation, despite the fact that those prophecies have been imminent for the past two thousand years, and lo, the Antichrist is nowhere to be seen.  (Nor, I might add, are they signs that we're about to collide with the planet Nibiru, which has also been on its way for some time now.)

So it remains a mystery, which a lot of people don't like.  As far as the Taos Hum, it's unlikely to be caused by oceanic waves of any sort, because Taos is not exactly beach-front property.  But I'll bank on there being some kind of rational explanation, even if we don't know what it is.

Until then, you'll either have to ignore it or else hum along.
Posted by Gordon Bonnet at 2:14 AM