I have a basic rule I try to follow, which is: insofar as it is possible, tell the truth.

I'll be up front that I haven't always met this standard.  I'm human, fallible, and swayed by context, emotions, and fear, and those can lead you to commit acts of dubious morality.  But I do my best to follow it, and when I screw up, to admit it and make amends.

That standard should apply even more rigorously to public officials.  They have been elected or appointed to positions of trust, and as such, they should adhere to the truth -- and make their decisions based upon the truth.

Which brings me to Sarah Huckabee Sanders.

Sanders, who is White House Press Secretary, has the unenviable position of making Donald Trump's decisions seem reasonable.  What this means is that she not only has to defend him, she has to persuade the press that Trump himself is being truthful.  And considering that a Washington Post analysis has counted 1,628 times the president has publicly lied since taking office a year ago, it's not an easy task. 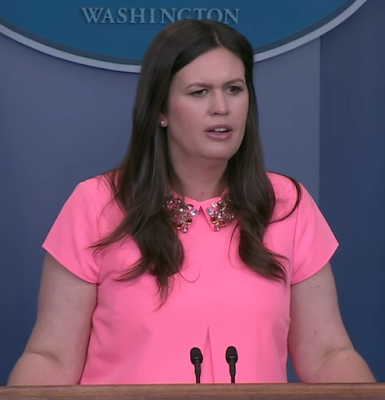 What that means, of course, is that frequently Sanders herself has to lie.  Or to defend lying, as she did two days ago when there was a public outcry about Trump retweeting links from Britain First, an ultraright nationalist fringe group, including one showing what they claimed was "a Muslim boy beating a Dutch boy on crutches in the Netherlands."

Among the many problems with the president retweeting inflammatory rhetoric was the fact that it came to light pretty quickly that the original claim was wrong.  The video clip was not a fight between a Muslim and a non-Muslim Dutch boy; it was a fight between two Dutch teenagers, one of whom had dark hair and the other light hair.  So it was actually something that should only be relevant to the local police; a video of two teenagers having a fight.

But the fringe elements never miss a chance to mischaracterize something if it suits their ends, so Britain First claimed this an Evil Muslim Refugee attacking an innocent Dutch citizen.  And Trump, for whom "tweet first, think later" has become a mantra, passed it along to all of his 43.7 million followers.

This left Sanders in the position of trying to defend what Trump had done, which she did in a curious way; by admitting the video was fake, but saying the president's point was still valid:


I'm not talking about the nature of the video. I think you're focusing on the wrong thing.  The threat is real, and that's what the president is talking about, the need for national security and military spending, those are very real things, there's nothing fake about that.  The threat is real, the threat needs to be addressed, the threat has to be talked about, and that's what president is doing in bringing it up.

No, what the president is doing is passing along a lie that was deliberately designed to stir up ethnic hatred.  And, worse, not admitting it when he got caught.

The "deny-deflect-distract" strategy has worked well for him in the past.  It reminds me of the anti-evolution screeds by the inimitable Duane Gish, originator of the so-called "Gish Gallop."  Gish became famous for "winning" debates by inundating his opponents with questions, irrelevant tangents, and demands for minute details, leaving even the most talented and intelligent debaters foundering.  Here, Trump piles one lie on another so fast that we can't keep up with them, and shrieks "fake news" at anyone who dares to call him on it.  And, with Sarah Huckabee Sanders standing there and telling us that he didn't lie, but if he did lie it doesn't matter, and if it matters, well, too bad -- he's insulated from the impact of his complete disregard for the truth.

At least so far.  One has to wonder how long it'll be before the entire house of cards starts to collapse.  Because the lies are no longer just about evil immigrants and wicked, America-hating liberals; now he's lying about the outcome of his plans for tax and health care reform.  You have to wonder how his followers will look at him him when they realize that they elected a scam artist who has no more regard for the "little guy" or "middle-class workers" than Marie "Let Them Eat Cake" Antoinette did.  He operates out of two motives: (1) gain praise however he can, and (2) feather his own nest and those of his rich donors.  And the "tax reform" bill is a thinly-disguised giveaway to the very, very rich.

The bottom line here is that truth matters.  Lies are "alternative facts" in the same sense that my index finger is an "alternative gun."  People on both sides of the aisle who care about the truth need to be calling the president out on every lie, and demanding that our senators and representatives not give him a pass just because of partisan loyalty.  We cannot afford to have a liar-in-chief -- even if his toadies try to give those lies a coating of whitewash.
Posted by Gordon Bonnet at 2:06 AM