Diehard believers in the Yeti -- known in North America as Sasquatch or Bigfoot -- have this tendency when confronted to bring out such dubious evidence as photographs of prints and blurred video footage.

Skeptics, of course, need more than that.  While those could be evidence of the fabled proto-hominin, the fact is that it's all too easy to fake that sort of thing.  In these days of Photoshop, creating absolutely convincing videos or photographs of Bigfoot (or UFOs or ghosts or what-have-you) is child's play.  And given the combination of attention-seeking behavior and desperation by the pro-Sasquatch cadre, it's not to be wondered at that we skeptics look at all this stuff with a wry eye.

"But wait," the squatchers cry.  "We have hard evidence!  In the form of hair, teeth, feces, and so on!"

And, in fact, so they do.  The Messner Mountain Museum (amongst other places) has a variety of bits and pieces from the Himalayas that have been long claimed to be from the fabled Abominable Snowman. 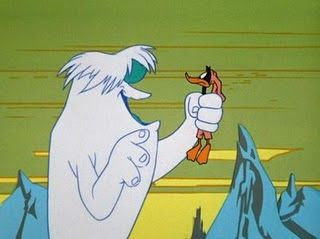 But of course, the problem is, until that claim is evaluated by a trained scientist, it remains conjecture, given that unless you know what you're looking at, a great deal of mammal fur (not to mention mammal shit) all looks kind of alike.

Finally, the museums have acquiesced.  You can see their reluctance; if the samples proved to be from a non-Yeti source, it's kind of an anticlimax, which would be bad for business.  But the demands of science proved persuasive, and they handed over the goods to Charlotte Lindqvist, professor of biological science at the University of Buffalo.

So, without further ado: the samples from the museums turned out to be from...

Which is simultaneously expected and a little disappointing.  Being a biologist myself, no one would be happier than me if the Yeti did turn out to be real.  For one thing, it would be highly entertaining to watch the creationists trying to explain that away.  For another, the sheer magnitude of the coolness factor of there being a hitherto-undocumented giant primate species is undeniable.

But alas, Lindqvist has shot down our hopes and dreams.  "Science does not (or at least should not) have an agenda, and I didn't set out to debunk the Yeti myth," Lindqvist said.  "Although we had a hypothesis that they could be bears, the samples we analyzed were of unknown identity to us and we didn't know what to expect...  Our findings strongly suggest that the biological underpinnings of the Yeti legend can be found in local bears."

Or, as my pal and fellow writer Andrew Butters (of the wonderful blog Potato Chip Math) succinctly put it: "Yeti?  Nyeti." 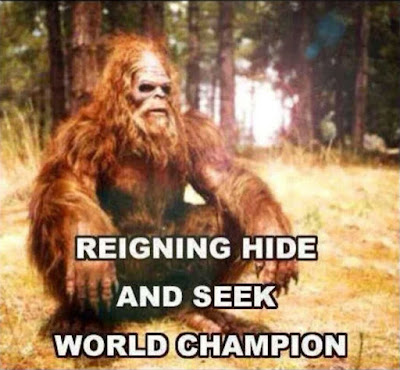 The scientific method wins again, even though the win is a bit of a Pyrrhic victory for us cryptozoology buffs.  We keep hoping for another coelacanth, and the scientists give us eight bears and a fucking dog.

I mean, no disrespect intended toward bears and dogs, which are cool in their own right.  But still.

So I guess it's back to square one, which I have to admit we kind of never left in the first place. There are other cryptids left to search for, but none of the remainder seem all that likely to me.   For example, I just can't take seriously things like the Scottish Kelpie, which is a man-eating horse-headed water creature, who can also shapeshift into a beautiful naked woman.

Call me skeptical, but I just don't think that one will bear out.

Anyhow, if you're a Bigfoot aficionado, sorry to rain on your parade.  But as I've so often said, you can't argue with the facts.  (Well, you can, but you won't succeed, and you'll make yourself look like a damn fool in the process, as the inimitable Melba Ketchum proved when she claimed she'd found Bigfoot DNA, created a journal so she could publish a paper she'd written that no peer-reviewed journal would touch, had a major online meltdown when everyone laughed at her, and thereby torpedoed her own career.)

As for me, I'm on to bigger and better things, like planning a trip to Australia so I can search for the legendary Drop Bear, which has been likened to a "giant carnivorous koala."  I hear they can be dangerous, so I plan on doing what the locals suggest, which is to walk around holding a screwdriver point-up over my head, so if a Drop Bear drops on me, he'll impale himself.  Better safe than sorry.
Posted by Gordon Bonnet at 2:18 AM