A friend and loyal reader of Skeptophilia responded to yesterday's post, about a high school biology teacher who decided to name a chemical reaction after himself with the result that it became semi-official on the internet, with an email that said, "I'd love to talk to you more about this phenomenon.  How 'bout we meet at The Shed at Dulwich for lunch tomorrow?"

Which was a little puzzling, until I clicked the link he sent, which was about how a non-existent restaurant became an internet phenomenon.

It started earlier this year when a freelance writer with the unlikely name of "Oobah Butler" decided to create a TripAdvisor page for a fake restaurant, and gave the address as the location of a garden shed next to his house in the town of Dulwich, England, which is a suburb of London. 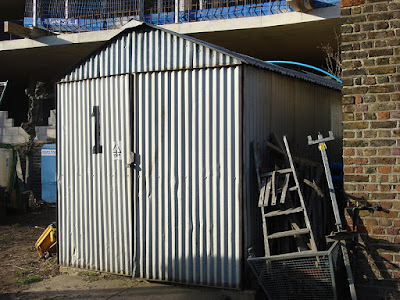 Once the page was created, Butler and a few friends lauded The Shed at Dulwich in gushing tones.  They got a burner cellphone to be the restaurant's phone number.  They created a fake menu, each dish based upon a human emotion (my favorite one was "Lust:  Rabbit kidneys on toast seasoned with saffron and an oyster bisque.  Served with a side of pomegranate soufflé.")  They created photographs of entrées out of non-food items such as bleach tablets and shaving cream, which included the following: 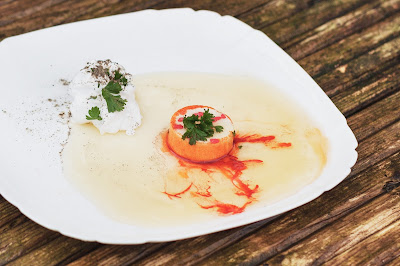 Which, honestly, looks a lot like stuff I've eaten at upscale restaurants, although I assume it wouldn't taste like it.

The reviews kept pouring in.  "The best shed-based experience in London!" one of them said, which you would think would have tipped people off.

But no. The positive reviews, combined with the menu and photographs, made The Shed at Dulwich rocket upwards in TripAdvisor.  (Another said, "Spent a weekend in London and heard through the grapevine that this place is a must-visit.  After a few mildly frustrating phone calls I was in.")

The phone began ringing off the hook.  Butler told the callers, "Sorry, we're booked up."  He was sent free samples by restaurant supply companies.  The Dulwich governing council called Butler about relocating the restaurant to a more business-friendly property.  People contacted him looking for employment.

At this point page for The Shed was receiving 89,000 hits a day.  It rose to #1 in the TripAdvisor restaurant category for the Greater London area.

Have I made it clear enough that this place doesn't actually exist?

This is like the Swanson conversion from yesterday's post, only more so.  Like a thousand times more so.  Of course, eventually Butler was found out, and he 'fessed up, and the page was taken down.  But not before he was receiving hundreds of calls daily, from all over the world, asking for reservations -- some of them for months in advance.

So if you needed further indication that you should view anything online with a good dose of skepticism and critical thinking, this is it.  A guy and a few friends, armed with nothing more than a burner cellphone, some photographs of household items dolled up to look like food, and a good imagination, punked TripAdvisor and thousands of eager foodies.  I don't know what would possess someone to do this, other than a warped sense of humor and way too much free time, but it does illustrate the human capacity for hoaxing.

You can't even trust webpages for highly-rated restaurants.  You see why I'm dubious about online claims for ghosts, UFOs, and Bigfoot?
Posted by Gordon Bonnet at 1:59 AM