The lure of the storyteller

I've been a storyteller since I can remember.  Nicer than calling it "compulsive liar," which I suppose is what it is, not that I claim my stories are true anymore, something I was known to do as a child.  Even if you know it's not real -- maybe especially if you know it's not real -- to imagine things to be different than they are, to dream of a world different than the one you inhabit, is mesmerizing.

I had my first experience sharing a story I'd written when I was in first grade.  It was a ridiculous little thing, with equally ridiculous illustrations, about a bird that fell out of its nest and bent his beak, then had to find someone to help him straighten it out.  I was terrified when I got up in front of the class to read it... but they loved it.  They laughed at the right places, and applauded when I was done.

And I was hooked for life.

What's curious is why this drive exists at all, and why it is so common.  Almost everyone either likes telling stories, hearing stories, or both.  What possible purpose could there be to telling stories that are obviously false both to teller and listener? 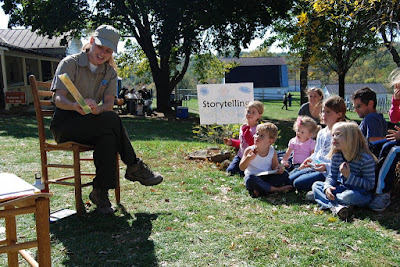 A new paper in Nature: Communications, by Daniel Smith et al., sheds some light on this uniquely human behavior.  Entitled "Cooperation and the Evolution of Hunter-Gatherer Storytelling," the researchers conclude that storytelling exists to pass along social norms, encourage cooperation, and enhance social cohesion.  The authors write:


Storytelling is a human universal.  From gathering around the camp-fire telling tales of ancestors to watching the latest television box-set, humans are inveterate producers and consumers of stories.  Despite its ubiquity, little attention has been given to understanding the function and evolution of storytelling.  Here we explore the impact of storytelling on hunter-gatherer cooperative behaviour and the individual-level fitness benefits to being a skilled storyteller.  Stories told by the Agta, a Filipino hunter-gatherer population, convey messages relevant to coordinating behaviour in a foraging ecology, such as cooperation, sex equality and egalitarianism.  These themes are present in narratives from other foraging societies.  We also show that the presence of good storytellers is associated with increased cooperation. In return, skilled storytellers are preferred social partners and have greater reproductive success, providing a pathway by which group-beneficial behaviours, such as storytelling, can evolve via individual-level selection.  We conclude that one of the adaptive functions of storytelling among hunter gatherers may be to organise cooperation.

So storytelling helps the community by teaching the social structure, and helps the storyteller by increasing the likelihood (s)he will have sex.

Which is pretty cool.

In a piece that study lead author Daniel Smith wrote for The Conversation, we find out that it's not only literal storytellers who are more likely to get lucky:


Even in modern, Western society skilled storytellers – ranging from novelists and artists to actors and stand-up comics – have a high social status.  There is even some evidence that successful male visual artists (a form of modern-day storyteller) have more sexual partners than unsuccessful visual artists.


Humans have evolved the capacity to create and believe in stories.  Narratives can also transcend the “here and now” by introducing individuals to situations beyond their everyday experience, which may increase empathy and perspective-taking towards others, including strangers.  These features may have evolved in hunter-gatherer societies as precursors to more elaborate forms of narrative fiction.

Such narratives include moralising gods, organised religion, nation states and other ideologies found in post-agricultural societies.  Some are crucial parts of societies today, functioning to bond individuals into cohesive and cooperative communities.  It’s fascinating to think that they could have all started with a humble story around the campfire.

As a novelist, it's not to be wondered at that I find all of this pretty cool.  Not, I hasten to state for the record (mostly because my wife reads my blog) that I'm looking forward to any hanky-panky with starry-eyed groupies.  But the idea that our penchant for telling stories performs a vital function, benefiting both teller and listener, is fascinating. I'm a little curious, however, about the function (if there is any) of stories that don't tell any kind of explicitly moralistic message.  Ghost stories, for example.  It's possible that the social cohesion aspect exists for those as well -- the telling-tales-late-at-night-while-camping phenomenon -- but one has to wonder if there's a different benefit accrued from different types of stories.

Maybe telling a scary story makes it more likely that a person of your preferred gender will cuddle up to you afterwards for reassurance and comfort, and also increase the likelihood of of your getting laid.  I dunno.

Or maybe that's just wishful thinking on my part.  Because I write paranormal fiction, and what the plots of my novels have mostly done is made people wonder if I was dropped on my head as an infant.
Posted by Gordon Bonnet at 4:44 AM