In further exploration of beliefs for which there is no evidence whatsoever, today we consider: the Nephilim.

What are the Nephilim, you might ask?  Well, amongst other things, they are the subject of Scott Alan Roberts' book, The Rise and Fall of the Nephilim: The Untold Story of Fallen Angels, Giants on the Earth, and Their Extraterrestrial Origins.  In order to save you the money of buying this book (even the Kindle edition costs $9.34), allow me to explain that the Nephilim are apparently the result of angels having sex with human women, which resulted in a race of giants.  The whole thing seems to have come out of a couple of lines in the bible, especially Genesis 6:4, "The Nephilim were on the earth in those days--and also afterward -- when the sons of God went to the daughters of men and had children by them.  They were the heroes of old, men of renown."  They're mentioned in Numbers 13:33 as well: "We saw the Nephilim there (the descendants of Anak come from the Nephilim).  We seemed like grasshoppers in our own eyes, and we looked the same to them."

So, the Nephilim were big dudes, evidently.  Exactly how big is uncertain.  Be that as it may, Scott Alan Roberts has examined the evidence (two passages from the bible) and come to the only possible conclusion: the "angels" mentioned in Genesis 6:4 as the fathers of the Nephilim were outer space aliens, and the Great Flood happened to destroy these "demonic hybrids" and remove all traces of alien DNA from the human gene pool.

Oh, okay.  I mean, my only question would be: seriously?  You can tell all that from two bible passages? And I thought that angels didn't have sex, given that they don't have the required, um, equipment? I distinctly remember in a highly scientific documentary I saw, the movie Dogma, the angel Metatron drops his drawers and lo, it was revealed unto me that although he hath wings, he hath no wang. 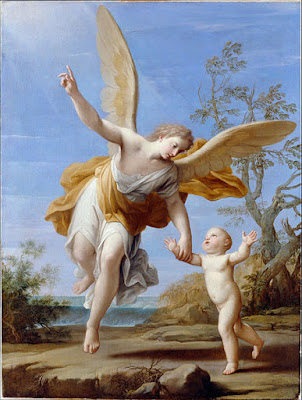 A complete lack of evidence, as I've stated before, never seems to discourage some people, and this hasn't stopped various folks from yammering on at length about the Nephilim, not to mention the sex lives of aliens and/or angels.  Take a look, for example, at this passage from the site Return of the Nephilim, which not only claims that the aliens had their way with human women back in the Bronze Age, but omigod it's still happening today:


Dr. John E. Mack, who needs no introduction to UFOlogists, has stated that the alien abduction scenario seems to be a program for the development of a hybrid race.  This very fact lends support to the theory that the abduction scenario is the modern resurgence of the Nephilim breeding program.  Pregnant women are abducted only to find the foetus has been removed from their womb.  In some cases they are reunited with their hybrid child in future abductions.  Men are forced to engage in sexual activity with hybrid females, or have their sperm removed from their bodies.  If there is any truth to theses alien abduction claims of literally thousands of people across the world the demonic plan of creating yet another hybrid race is already in action...  It seems pretty clear we may have entered “the Days of Noah”.

Okay, you biblical scholars correct me if I'm wrong, but I thought Noah lived a while back.  So whatever we're entering now, it's not so much the "Days of Noah" as it is the "Days of a Helluva Long Time After Noah Bought the Farm."  And I don't know about you, but this is the first I've heard of guys being forced to have sex with "hybrid females;" and you'd think that if pregnant women suddenly woke up to find their babies had vanished, it would kind of make headlines, you know?  So once again, we run headlong into the speed bump of "no evidence."

Anyway, that's today's post about the naughty Nephilim, sneaking into your house to steal your sperm and/or your hybrid children, lo unto this very day.  The whole thing leaves me wondering if today's Nephilim are as big as the ones in the bible.  I'm thinking in particular of my younger son, who is 6' 7", and next to whom I verily seemeth as a grasshopper.  On the other hand, the hypothesis that he is a human/alien hybrid is confounded by the fact that he looks a lot like me, so the likelihood of his being anyone else's son is pretty slim.  And I can vouch for the fact that his mother is who she claims to be, i.e., not an alien.

At least, as far as I know.  Those aliens are pretty tricky.  Maybe my ex-wife is really from another planet.  Maybe I was abducted in 1982, and was held on board a UFO for sixteen years, and used as part of a captive breeding program.  It's as good an explanation for my first marriage as any other I can think of.
Posted by Gordon Bonnet at 3:32 AM