The return of "Dear David"

Regular readers of Skeptophilia might recall that a few months ago I did a piece on "Dear David," a highly creepy child ghost that was allegedly haunting a cartoonist and Twitterverse frequent flyer Adam Ellis.  "Dear David" was, Ellis discovered, the ghost of a child who had died when a shelf tipped over and crushed his skull, which evidently pissed him off but good.

Why this made Dear David determined to harass Ellis is unclear, but that's what happened.  Not only did the creepy kid with the malformed head show up in Ellis's dreams, he called Ellis's cellphone hundreds of times (caller ID couldn't figure out where he was calling from; which makes sense, given that hell has an unlisted number).  He scared the absolute shit out of Ellis's cat on more than one occasion.  Ultimately, Ellis moved to a different apartment, and for a time, things calmed down.

But unfortunately for Ellis, "Dear David" is back.

Ellis, understandably, is freaking out.  Here's his own commentary -- this is strung together from separate tweets, but makes a coherent narrative:


(L)ast week something started to happen.  Late on Wednesday, I woke up with a start and felt something strange, like something had just been watching me.  I turned on the light but I was alone.  Still, there was this a tangible feeling of... badness?  Everything felt wrong, sort of like when you have the flu and you wake up at night and can't really tell where you are for a minute.  It was a feeling I'm used to—it always accompanies David.  People tweet at me a lot saying he might just need help, but I'm certain that's not the case.  Every time he shows up, I feel a palpable sense of malice.  There's what I felt that night.  Malice.  Dread.  But still, I was alone.  And I was so tired, I wound up just going back to sleep.  I've been so exhausted recently I can barely function.

So he slept for a while, but was once again awakened when the feeling came back.  And he had another surprise waiting for him:


Just like before, I jolted awake hours later, feeling the same unease.  I turned on the light and hurried out of bed to get my phone from the bookcase.  There were probably 350 photos to scroll through.

350 photos, I might add, that Ellis claims not to have taken himself.  And he got a serious shock when he found that all of them were photos of Ellis, asleep in his bed.

In more than one of them, there is a small, ghostly figure standing next to his huddled form, or leaning over toward him.  I'll direct you to the website if you want to take a look at them, because I don't want to step on Ellis's right to the images he posted, but I will say that they are, to put it bluntly, really fucking creepy.  Ellis writes:


The vast majority of them were me sleeping in an empty room.  It's sort of dark but you can see me sleeping.  I'd left a couple night lights on just in case anything showed up, but for the first hundred or so photos it was just me in an empty room.  Then, suddenly, he was there.  Standing on the chair at the foot of the bed staring at me.  In the next photo, from a minute later, he seems to be staring straight up at the ceiling?  Just staring.

Then he appears to collapse on the chair.  The next dozen photos are all the same.  He's completely lifeless.  At first I'd thought he was dead, which obviously doesn't make any sense.  I looked over at the chair half expecting him to still be there but it was empty.  But then, in the next photo, he's gone.  The room it totally empty again.  He's gone in the next several photos, too.

I figured maybe that was it, but I kept swiping through the photos.  About 15 photos later, he was back, standing next to the bed.  It was just like the last time I saw him.  That's when my heart started to race.  I didn't want to look at the rest of the photos, but I knew I had to.  I swiped to the next photo and my heart sank into my stomach.

He was on the bed.  Inches from me, staring down at me sleeping.

But that wasn't the worst.  Ellis continued to scroll through the photographs, and then got to the last one...

... which once again shows his sleeping form, but in the lower left hand corner is an extreme close-up of the side of someone's head, showing stringy, tousled hair and a malformed ear.

So yeah.  That falls clearly into the "oh, hell no" department for me.  I realize it's probably a hoax -- as I've pointed out many times, it doesn't take much skill to make some exceedingly creepy pics with Photoshop -- but it's a really well-done hoax.  It's simple, direct, and the images (however they were made) are completely shudder-inducing.

Especially the last one, which I seriously regret looking at. 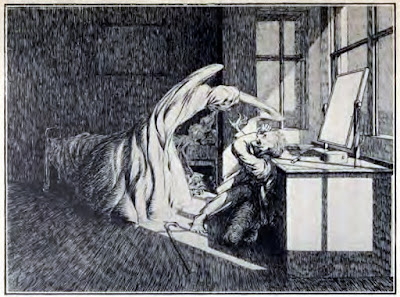 James McBryde, illustration for the M. R. James short story "Oh, Whistle, and I'll Come for You, My Lad" (1905) [image courtesy of the Wikimedia Commons]

So once again, we have evidence that being a skeptic does not render you immune from having the piss scared out of you by a good ghost story.  I have to say that whether it's fiction or not -- and acknowledging that it probably is -- Ellis is doing a really good job as a storyteller, getting his readers creeped out, waiting a while, then delivering a sucker punch when no one expects it.  And now, y'all will have to excuse me, because I've got to go get my cellphone...

... and make sure that no wandering evil ghosts with dented skulls have been using it during the night.
Posted by Gordon Bonnet at 1:55 AM