George Orwell, in his classic book 1984, writes characters who speak a dialect of English called "Newspeak."

The "Minitrue" (Ministry of Truth) controls the public perception of what is true, perceptions that are enforced by the "Thinkpol" (Thought Police).  The Thinkpol are responsible for stopping "thoughtcrime," including "facecrime" -- forbidden thoughts as revealed in your facial expression.  Toward that end, they "rectify" historical accounts (to conform to the government's agenda regarding what happened), eliminating anything that is "malquoted" or "misprinted."  You're trained to the point of accepting the government's views based on "bellyfeel" -- how they affect you emotionally, not whether they're true.

Intercourse between a man and a woman -- preferably without any pleasure -- is "goodsex."  Anything else is a "sexcrime."  The preference of the government is that babies are conceived by "artsem" -- artificial insemination.

Someone who breaks any of these rules -- or worse, contradicts what Big Brother wants you to do or say -- is not only killed, every trace of them is erased.  They become an "Unperson." 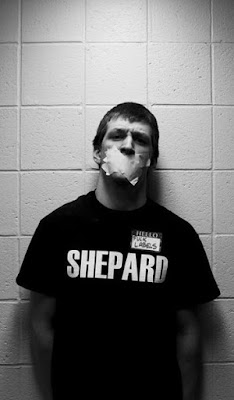 [image courtesy of photographer Todd Page and the Wikimedia Commons]

Orwell was strikingly prescient.  If you doubt that we're heading down that road, consider the story that was broken by the Washington Post yesterday, that employees at the Center for Disease Control have been given a list by the Trump administration of seven words they are not allowed to use in official correspondence or publications.

Those words are:
When I first read this, my initial reaction was, "This can't possibly be true."  The CDC being forbidden from using the word "fetus?"  But after some digging about, all I can say is that it appears at the time of this writing to be true.  The reports have not been corroborated by any official channels -- spokespeople for the CDC itself refused to comment -- but no one involved has stepped forward and said, "Bullshit."

I'm not sure what to be appalled most about this.  That we don't want any group of people identified as "vulnerable," because then we might have to do something about it.  That because of the Trump administration's ongoing war on minorities, we mustn't speak of diversity.  That LGBT individuals, whose rights to fair treatment are being threatened with every new judicial appointment, are guilty of "sexcrime;" and we have to pretend transgender people don't even exist.

And "science-based" and "evidence-based?"  What the fuck is the CDC supposed to base its policy on, then?  Magic?  The bible?  Prophecy?

Or just what its "bellyfeel" is?

I've tried not to engage in hyperbole about what this administration is doing, but every new thing I read drives me further toward the conclusion that they have really only one motive: consolidating power, and toward that end, shutting down resistance, eliminating free speech and the free press, rewriting the truth to conform to whatever Trump's cadre says it should be.  Everything contradictory is "oldspeak" that should be "rectified."

The result should be "doubleplusgood," don't you think?

My hope is the fact of this having been made public will give CDC employees the courage to defy this order.  People have to fight back, tell the 2017 version of the Thinkpol "No way in hell."  We have to spread this story far and wide, because you know the first thing the Trump administration is going to do is claim that this is all "fake news."

I have some slim hope that this report will turn out to be an exaggeration, or perhaps simply untrue.  But given the Trump administration's record for supporting not only the right to dissent but science itself, I'm not holding my breath.  What it's looking more like is that Orwell got the details right -- all he missed was the year it happened.
Posted by Gordon Bonnet at 3:27 AM